In Speaking Parts, Beth Ruscio explores among other ideas the link between appearance and reality especially as it relates to women. Ruscio, who has been a working character actress since the 1980s, draws on her life on television and theater and draws a parallel to the way people see women and the way women start to see themselves. It’s a fascinating discussion of how appearance both does and does not matter to self-identity, something that she at times ignores and at others understands and explores. 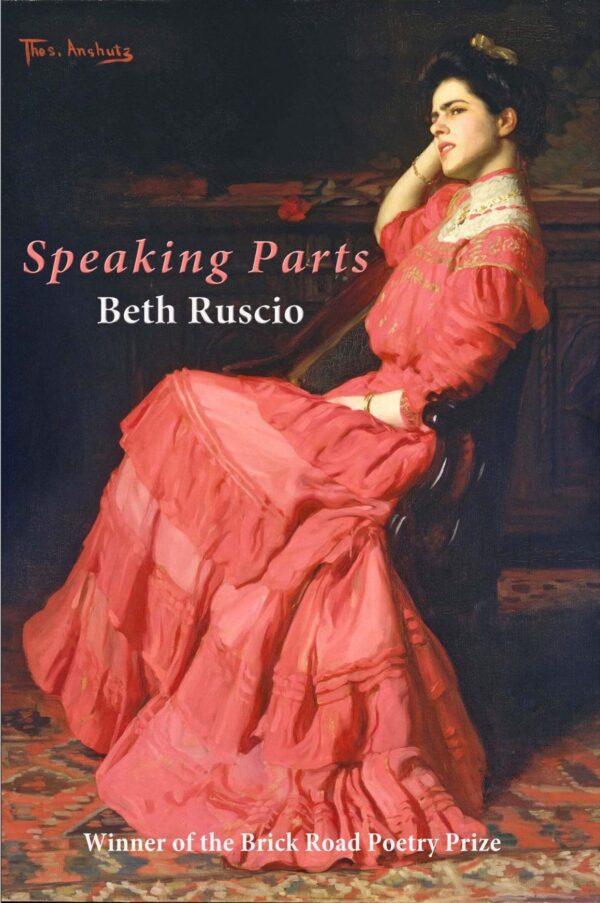 Ruscio’s discusses the danger of putting up false fronts, something that we all do naturally, but these false fronts are not mere shells. She refers to them as her other selves. In “Beside my self with” she begins to kill off these other selves inhabiting new lives with an unseen police force chasing her. She transforms through different incarnations. Her noir version is “invisible in mirrored Ray-Bans” (27). Her Matthattanite self tries “to blend in” this time showing her true self through the decor of her house. She runs into the actress playing her and feels less than, and she ends the poem with a line that kills me, “Eventually one feels assaulted by disguise” (28). Clothes define the very essence of people at times. In a later poem, she writes: “she’s a chalk turtleneck, shoes a shade of clay. / I’m a polka dot mini-dress in an Amish church” (44). Clothes here go beyond defining the person. Clothes are what the person is. When she is acting, it is costuming that brings the largest reactions in her and others. It pulls the part out of her. When playing a nun, the religious clothing chafes and scratches at her. When dressing up as a sick person, she gets real sympathy. I can only imagine that as someone who acts, she is more aware than the rest of us the power of appearance and how it forces reactions from ourselves and others. I, who have never acted, read this collection with fascination because of course, I costume in my everyday life. Who doesn’t? But I have done so without real critical awareness. Ruscio’s sensitivity with these insights go beyond a glib statement about how we present ourselves.

Speaking Parts also examines the way that she has grown into the relationships of her adulthood through the roughness that so many people have experienced in adolescence. In “Fifteen,” she sees a photograph and thinks about early presentation as a way of rebelling against whom she had been:

The low light in the black and white photo
accentuates your darkness, long pride of thick

brown hair, falling heavy past your shoulders
a bull’s-eye paisley that just cups your breasts

riding high, the dirty dare of your parted lips (21).

At the age of fifteen, she charges toward adulthood through her exploration of sexuality. Of course, as she grows older her insights into relationships and sexuality mature, but they are still often told through the story of her outward appearance. She explores the emotions of not having a child as she looks at her own wedding dress. “I married wearing a broken-in vintage frock. Saved, ironed into a precise rectangle, and tucked between layers of acid free tissue . . . Never materialized, the daughter I saved it for” (10). This bit of clothing is meaningful. It should have been passed on, and Rucsio masterfully uses it as emblematic of loss.

Speaking Parts is an exceptional collection, exploring ideas that I’d never explored myself. Beth Ruscio has spent a career acting, and she is able to bring the wisdom of that career with her to show us what it means to be human.