If a live event has no live actors, stage, sets or costumes, is it really theater? That’s the conundrum posed by Blindness, the unique gathering at the Daryl Roth Theater and the first indoor New York performance presented on or Off-Broadway since all NYC stages were shuttered due to the COVID-19 pandemic over a year ago. The piece was conceived in response to the pandemic and opened at London’s Donmar Warehouse last year. While it lacks the conventional accoutrements of a night at the theater, it does deliver a devastating emotional wallop—and that’s all any piece of entertainment requires to succeed.

Based on the best-selling 1995 fantasy novel by Nobel Prize-winning Portuguese author Jose Saramago, Blindness imagines the effects of an epidemic of sightlessness. Audience members are ushered into a vast playing space and seated at socially-distanced, two-person pods. The tale, in a condensed and tight adaptation by Simon Stephens, is relayed via the recorded voice of an emotive Juliet Stevenson, over headphones.

A performance of Blindness at the Donmar Warehouse.
Credit: Helen Maybanks

Multi-colored neon tubes are suspended over our heads, change color and descend as Stevenson matter-of-factly begins the story with an ordinary traffic stop in an unnamed European city. Suddenly, a motorist can only see white and the horror begins. The condition spreads throughout the country and gradually, the narrative focuses on an eye-doctor’s wife as the afflicted are quarantined by the government. The doctor’s wife, also his nurse-receptionist can still see and feigns blindness in order to be with her stricken husband. She becomes the leader of a small makeshift family—all of whom were treated by her spouse—struggling to survive in a nightmarish interment camp. Their humanity slips away while conditions worsen. The current real-life pandemic pales in comparison to this terrifying non-vision of the future where primitive instinct quickly replaces reason. 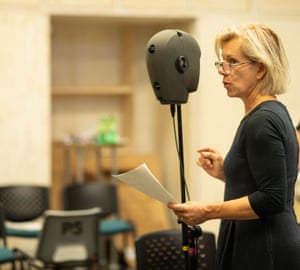 As the focus narrows, Ben and Max Righam’s amazing sound design and Jessica Hung Han Yun’s immersive lighting become equal stars with Stevenson’s sensitive and heart-wrenching aural performance. We become disoriented as the lights black out and Stevenson’s voice seems to be coming from everywhere. It sounds so real you may believe the actress is standing right next to you, moving away, and then returning. The audience becomes the blinded victims thanks to Walter Meierjohann’s all-enveloping direction. Stevenson vividly captures the roller-coaster emotions of the protagonist and guides us on this harrowing journey. She begins with a calm, neutral tone as the omniscient narrator, then gradually her voice takes on the raw animal rage and horror the wife’s character assumes when her fellow internees become savages. Finally, she regains her humanity as the impromptu community emerges from their prison and life resumes a form of normalcy. Stevenson’s voice endows the final moments with sweet wistfulness, expressing the yearning for companionship and compassion.

The parallels between Saramago’s dystopian world and our COVID reality are obvious. We have been separated from each other just as Saramago’s blinded are cut off from their fellows. The work can also be seen as a metaphor for the Holocaust, the Jim Crow south, the AIDS crisis, our dysfunctional immigration system, or any of the all-too-recurrent catastrophes besetting the 20th and/or 21st century.

But the event does remind us that theater, even stripped down to its essentials, can bring us together and allow us to gain perspective. It was weird and wonderful to be actually attending a stage event after a long absence. After a year without theater, Blindness is a bracing, scary welcome back, but also a hopeful glimpse of the post-COVID environment as the show ends with the theater doors opening, inviting us to step out of the darkness.