Broadway Wrap-Up: Off to On

After a long absence due to COVID, Broadway is slowly starting to come back. But the majority of new productions are not the typical Main Stem fare of jukebox musicals, revivals, or tuners based on popular movies. Most of the recent openings have been transfers or returns of unconventional Off-Broadway offerings. Two of them, Is This A Room and Dana H., are derived from transcripts of recordings of real people living frightening events and are running in repertory after award-winning runs at the Vineyard Theater. This pair of unusual evenings are both short (only 70 minutes each) and small-scale with simple sets, but pack an enormous wallop. 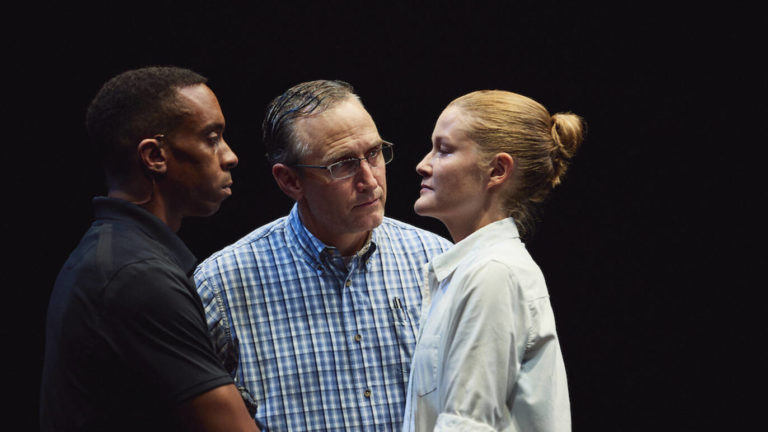 Will Cobbs, Pete Simpson, and Emily Davis in Is This A Room.
Credit: Chad Batka

Room is Tina Satter’s nightmarishly tense recreation of the FBI interrogation of Reality Winner (yes, that is her real name), an Air Force intelligence specialist. She was accused of leaking classified information which provided evidence that Russia meddled in the 2016 presidential election. The script is taken from the agents’ recordings on the day they showed up at Reality’s Augusta, Georgia home and slowly transformed it into a space of intimidation. Though the specifics of the leaked documents are not mentioned, nor does the name Trump ever come up, Satter, listed as conceiver and director, creates a chilling contemporary political drama with suggestion and nuance. Small talk over gym memberships, pets, and careers is interspersed with needling, leading questions as Reality’s veneer of normality slowly crumbles. The play becomes not about specifics but about the power of authority to crush the individual.

Satter and her expert cast of four subtly balance the shifts from mundane chatter to ominous power plays. Emily Davis captures Reality’s jittery facade, inner resolve, and desperation to put her life back in order. Whether she is pleading for her pets to housed if she is arrested or struggling to stand up for her rights and beliefs, Davis holds our attention and sympathy. As the lead FBI agent, Pete Simpson is a master at understatement, slipping pleasantries in between threats while Will Cobbs as his partner is a scary “bad cop.” Becca Blackwell provides sturdy support as their backup. Sound designers Lee Kinney and Sanae Yamada create a nightmarish aural landscape, complete with threatening “Booms” every time material from the transcript is redacted.

The transfer to Broadway lacks the intimacy of the Vineyard run—I remember feeling as if I were being interrogated along with Reality when I saw it. But Room remains a searing snapshot of a surveillance state. 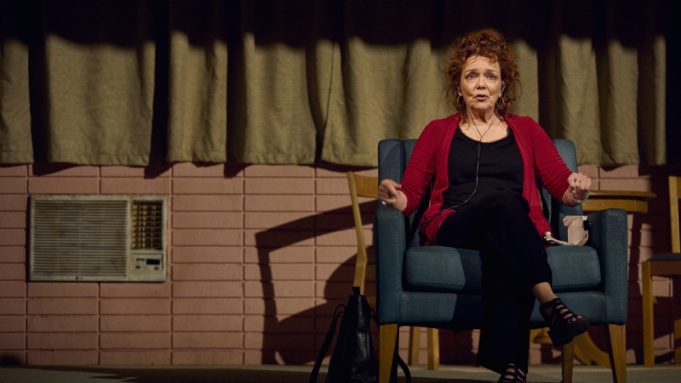 Even more harrowing is Dana H., Lucas Hnath’s gripping work based on interviews with his mother who was kidnapped for five months by a dangerous criminal when she was working as a counselor at a psychiatric hospital. Deirdre O’Connell performs the extraordinary feat of lip-synching Dana’s dialogue with the unseen interviewer Steve Cosson. This remarkable acting accomplishment is much more than a gimmick. You gradually forget that O’Connell is speaking to a pre-recorded track as her body language and eloquent features convey the tumult of Dana’s ordeal. She becomes Dana and Andrew Boyce’s generic motel room set turns into her hell of captivity through O’Connell’s three-dimensional limning. Hnath has stitched together pieces of the interview (along with audio editor and sound designer Mikhail Fiksel) to create a tapestry of terror that enmeshes you and doesn’t let go, not even after the lights come up. Les Waters’ straightforward staging adds to the almost unbearable tension. There is a sequence in the latter part of the play that is shattering in its ordinariness, given the circumstances that precede it. No spoilers, but be ready for its impact. 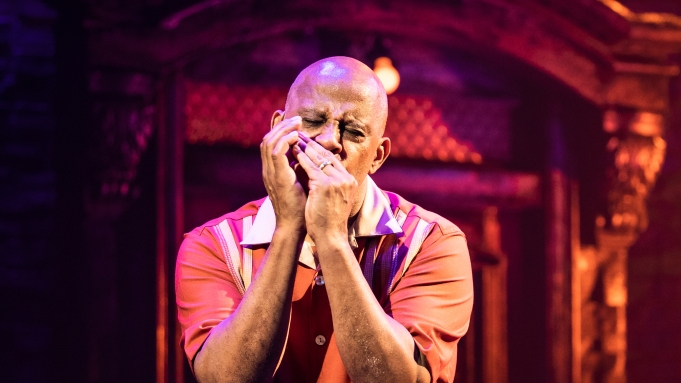 Another Off-Broadway solo show, Ruben Santiago-Hudson’s Lackawanna Blues, has also found its way to Broadway without losing its snap. Originally presented at the Public Theater in 2001, Blues is the author-star-director’s autobiographical tribute to his beloved foster mother Nanny Crosby, who maintained a boarding house of eccentric characters in the titular upstate New York town while raising him. As he did 20 years ago, Santiago-Hudson plays all the inhabitants of Nanny’s home in a series of hilarious and touching vignettes, accompanied by Junior Mack’s tangy guitar. Gamblers, convicts, war veterans, and the irrepressible big-hearted Nanny come to vivid life. When the show originally played, it was hailed as a salve to wounds suffered on 9/11, now the affectionate tribute heals injuries suffered during another national crisis, that of COVID.

While these smaller-scale shows have lost a degree of intimacy in their transfers from Off-Broadway to on, The Lehman Trilogy undergoes a metamorphosis in the opposite direction. This Italian play about the American financial empire played a limited run in the cavernous Park Avenue Armory after a smash London engagement at the National Theater. Now, set designer Es Devlin’s huge cube of a revolving set fits neatly into the Nederlander Theater and provides a memorable experience which is both vast and up-close. 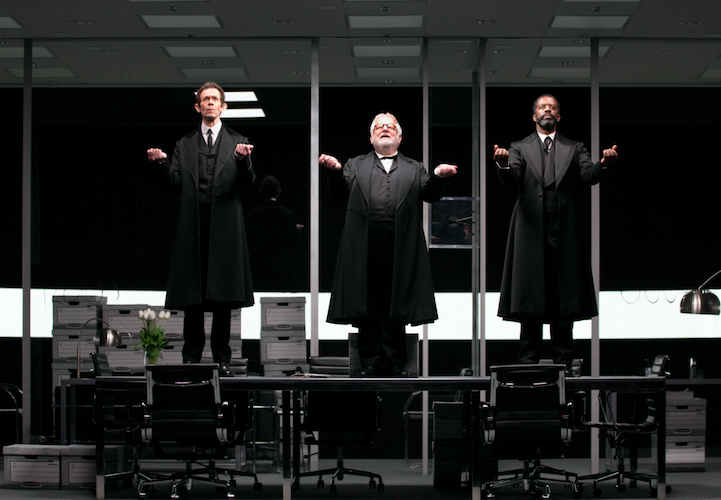 Stefano Massini’s three-and-a-half-hour epic, adapted by Ben Power, traces the trajectory of the Lehmans from immigrant merchants in 1840s Alabama to pioneers in the field of investments in the 20th century to the firm’s 2008 bankruptcy. Massini doesn’t take a pro- or anti-capitalism stance, but this sweeping history of one family and the parallel growth and convulsion of the American economic system is fascinating theater. Particularly as directed with startling imagination by Sam Mendes and with an army of characters, male and female, played with consummate skill by Simon Russell Beale, Adam Godley and Adrian Lester (taking over the roles plays by Ben Miles in London and Off-Broadway). Lester fits snugly into the three-man ensemble, playing the more aggressive Lehmans with force and virility. Godley remains a delight, particularly as the innovative Bobby Lehman who dances into his grave and as a series of prospective wives for the exacting Philip Lehman. Beale remains the outstanding member of this small, amazing cast, creating an array of sharp, believable portraits from the solemn Henry to the computer-like Philip to the flirtatious Ruth (Bobby’s unhappy wife) to plantation owners to cotton dealers to Greek restauranteurs. 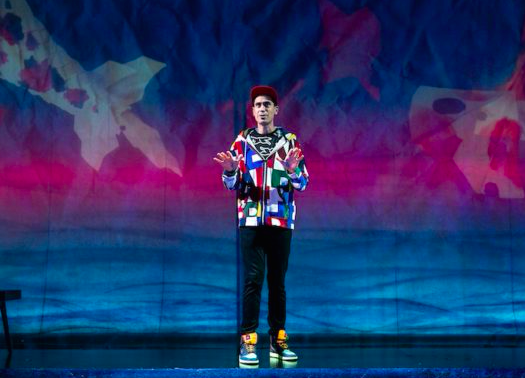 Finally, rounding out of this re-opening wrap-up, Second Stage has started its Off-Broadway season with Letter of Suresh, Rajiv Joseph’s companion play to his Animals Out of Paper. This is one of those plays where the characters speak directly to the audience throughout without any direct interaction and the plot revolves around the convention of a series of total strangers pouring their hearts out to each other in letters. After a chance encounter in Nagasaki at the memorial site to victims of the atomic bomb, a Japanese priest and a genius level polymath American of East Indian heritage (Suresh of the title), begin writing to each other. The chain of correspondence also eventually includes Suresh’s ex-girlfriend Amelia and Melody, the grand-niece of a Korean monk who has come into possession of the letters. There’s a lot of interesting talk about faith, love, and science but it’s very hard to care about these characters because they all seemed so removed from us and each other. At one point, almost out of nowhere, Suresh suddenly announces he has been using his vast intelligence to create nuclear weapons and he feels just awful about it. Huh?

Tags:
Previous Article
Jay KLM: “Definition”
Next Article
If This Is How Love Feels: Part 1