Yash is a mural artist living in Stockholm who draws inspiration from people, animals and their bodies. Light, colors and emotion play a central role in his work as well as a love for shapes and simplicity.
I caught up with YASH and below is how it went down. 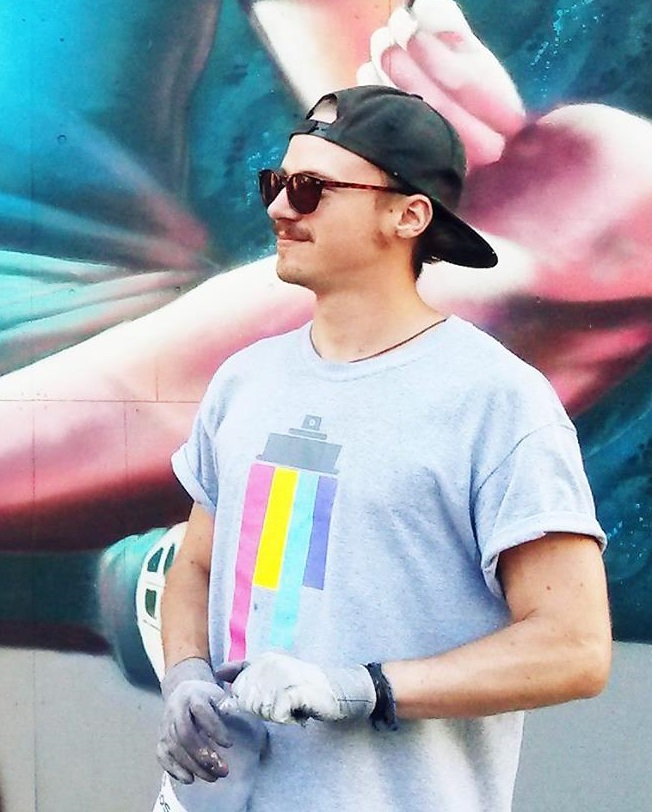 Could you tell us a little about yourself, where you´re from, and how did you get started in the urban art scene?
I grew up in a small village in Sweden. There wasn’t much to do there. Painting my first wall was more or less just something I did to get some excitement. I wasn’t into art or anything like that at the time. Later I got to know other writers from the area and they inspired me a lot. Even though it was a small town, the quality of the painters was really high. I got hooked and have been drawing and painting ever since, even though it hasn’t been on walls all the time.
Do you have a formal education?
I studied art as my main direction in the Swedish version of high school. That’s about it in terms of art. It was a nice school but I was a little to young to take it seriously back then. I’ve studied and worked with design and animation for many years after, and that has given me lots of knowledge about colors, light, composition and such. I’ve been thinking of going to a real art school many times but… I don’t know. It just hasn’t felt like the obvious thing to do for some reason. Your style is one of a kind. Could you describe the development process of your artwork?
I spend lots of time in the sketching stage. It usually takes a couple days back and forth with many versions before it gets to where I want it to be. I use my camera or look online for references and mix and match lots of stuff. I always sketch digitally.  I try to get the composition down as close as possible, but colors and details always change around when I’m painting.
How do you go about creating your art piece? How do you choose a wall/environment?
I haven’t had so much options to where I can paint actually. Most of my recent walls are done in a fame outside Stockholm. This year I painted two walls in the city, and those I chose myself, but they were chosen very much with the idea that the owner would actually allow it. Getting wall space in the city of Stockholm isn’t easy. I would like to be more creative with the environment. 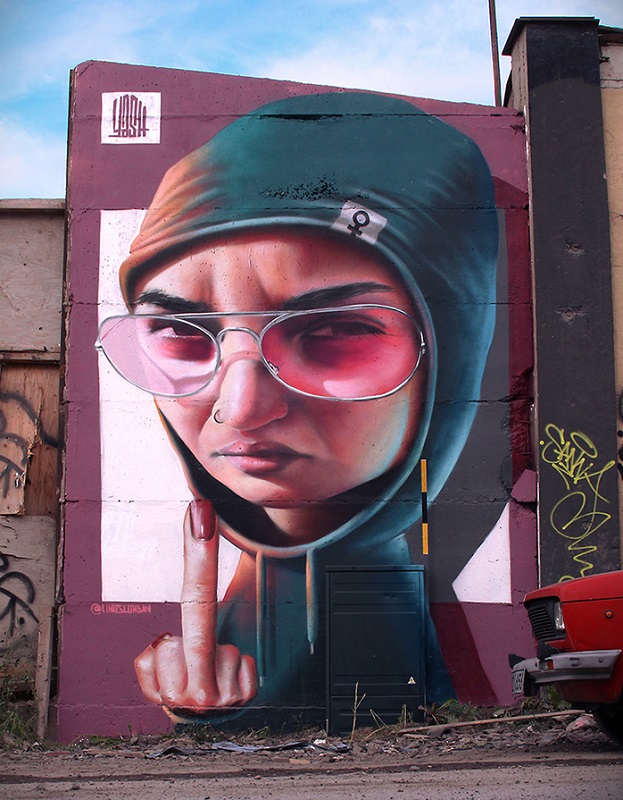 How much does your art affect or influence your everyday life and are there any role models or artists who inspired you?
I have a lot of focus when I’m doing something, but I can only focus on one thing at a time. I also work with animation. It’s always for clients and I keep it apart from my art, and then I can’t go home painting in the nights as well because my head is just full of other things.  When I’m painting that is the only thing I do, and then all my time goes into it. My regular habits get all weird and it’s not unusual that I stay up all night painting or sketching. I’m always watching stuff in everyday life though that inspires my art work. I’ve gotten lots of weird looks in the subway from staring at people’s faces for too long…
All the painters that were putting up nice stuff in my hometown when I was young has really inspired me. I wouldn’t do this now otherwise I think. Hard to tell of course, but they were pretty much my world of art back then. I wasn’t looking too much in magazines or online back then. Now because of instagram and facebook mainly I see so much nice work all the time. It’s all very inspiring. 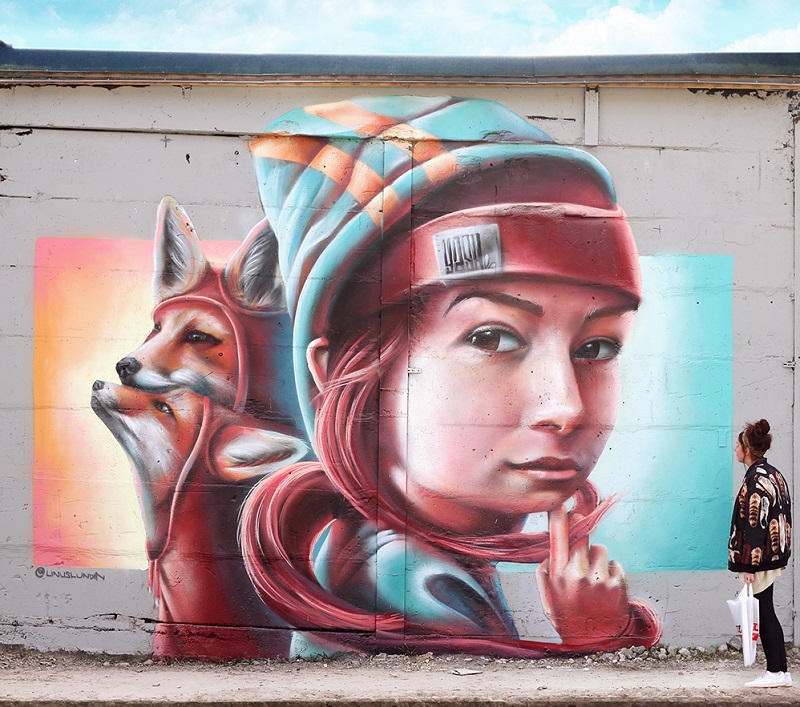 Has your style developed throughout the years?
Yes definitely. I don’t think people would recognize my early walls at all. For me they’ve always had the same kind of feeling to them, but the way I’ve been expressing it have changed. They are more mature now. I don’t like most of my old works. I guess that’s the case for any artist.

What are your thoughts on the way the internet is influencing the artworld?
I think it’s great. It’s really cool to connect with people that I would otherwise have no idea about, but on the other hand I see so much paintings everyday online that the impact they have on me is not as big nowadays as when I saw a great piece ten years ago.
Have you painted in other countries? If so, what was your favorite?
I haven’t traveled much at all.  Last summer I painted at Upfest in the UK. It was nice to meet artists from all over the world there, but the weather was pretty bad that weekend hah. I would really like to travel more, but hasn’t been in a hurry really.
Have you painted in the USA? If so, how was your experience like?
Unfortunately not. Would love to. 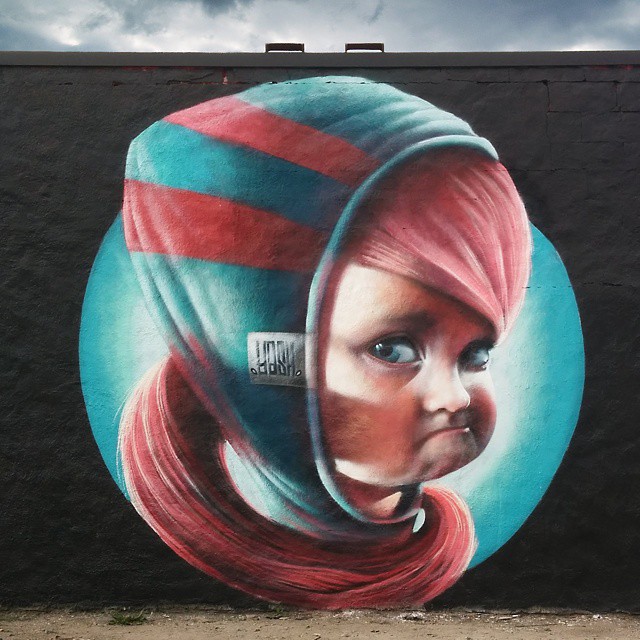 “Juno” Painted in Snösätra outside Stockholm. 2015.

Is there a message in your art?
Not all the time. Sometimes I just want to get out and paint, and then it’s more about the aesthetics even though I think it’s hard to make art and not put anything from myself in it. What I mean with that is that even though I don’t have a clear idea with some pieces, they are a product of how I see life. Other pieces I have more thoughts behind, but I don’t like to serve the solution. The best stories I think is the unexplained… where there is room over for personal interpretations and people can create their own story from their own experiences.
Street art is still considered vandalism, how is it for you to go out and paint in the street? Did you ever have any problems with the law?
Not really, but I’ve mostly painted legal walls.
What have been your most challenging and rewarding piece of work thus far?
I think my wall on Luthens Gränd in Stockholm this year was my biggest challenge so far because of all the other work around it besides the actual painting. It was a lot of things that had to be planned before, but with help from friends it went very well. I really enjoyed every day of painting it. It was the first of its kind in the area so it got a lot of attention as well.
[embedvideo id=”oFz-ZH73VLk” website=”youtube”]
What do you do when you are not creating art? What are your hobbies?
Painting is my biggest interest. I also do animations as I mentioned earlier, but it’s mostly for clients. I always bring my guitar when I’m going to the bathroom, and I really like making music, but unfortunately that interest doesn’t really get so much attention right now. 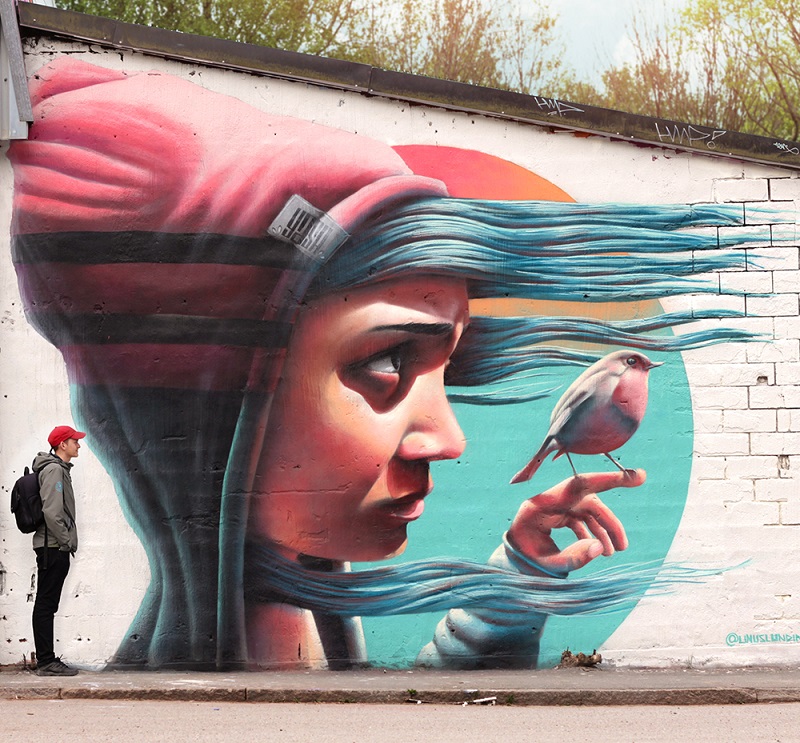 A stunning work in Stockholm, created in 2015.

What’s next for you? What shows or projects do you have planned?
I don’t really know, and that feels very exciting! I’m just about to finish an intense period of working with animations, and now I will go back to my studio and paint and plan the next year. I’m very excited for it. I will have an exhibition next year, but it’s still in the planning so I don’t know where or when. I’m having my hopes for some other projects, but nothing is decided yet so I don’t want to jinx it. I have a lot of ideas that I just haven’t had time to develop lately, and now I will finally have some time to take up were I left off. Looking forward!

Sami Wakim is the founder and editor of Street Art United States, an online community that supports street artists and has well over 100,000 followers worldwide on social media. Sami has organized several legal street art murals in the Boston area and has hosted local and international artists who have contributed to the flourishing street art community in the city.

Tags:
Previous Article
Hollywood Notebook: Masterfully Raw and Intimate
Next Article
Belief Is Its Own Kind of Truth, Maybe