This week, last but by no means least, I am thrilled to share our final 2 winning films for Dare to Dance in Public Film Festival: Round 4. They are Geister, and the inimitable Smokestack Lightning.

Best Editing Awardee Geister is a gorgeous, site-specific dance film that could have won in so many categories that our panel of judges (myself included) were confused how to award it. Filmed at a beautiful old European castle with the quietly powerful Trio Vitruvi playing Beethoven, at first glance the film appears to be incredibly formal and classical looking. The grand old setting, the three musicians in formal black suit and ties (with very shiny black shoes)… but then the dancer – and the camera – both begin moving, and all that’s upended. Netherland Dance Theater choreographer Paxton Ricketts and critically acclaimed dancer Sebastian Haynes, also of NDT and the Royal Danish Ballet, make for an incredible pairing, delivering stunning, innately emotional and intelligent choreography that blends singular, contemporary gestural movement with classical lines. The camera movement by Director/DP Tom Mckenzie is gorgeously visceral – with POV’s at times filmed through instruments – and with the brilliant editing and the amazing music it combines to make Geister a feast for the senses. 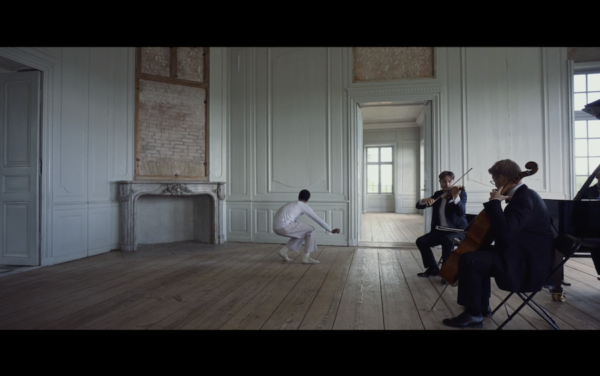 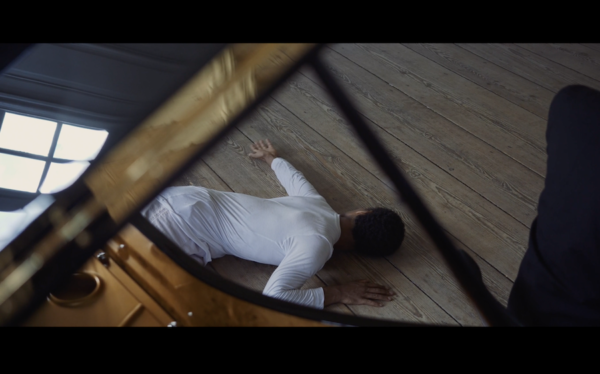 We reached out to the filmmakers about their inspiration(s) and Choreographer Paxton Ricketts got back to us: “The inspiration for Geister is a complicated web of ideas and circumstances. The piece was originally meant to be performed on stage in front of a live audience. But, as with so many things of late, we adapted the concept to the times. The starting point for the movement vocabulary was largely driven by behavior. We were particularly enamored with the concept of “Ethology” which is the behavior and psychology of animals. We also knew that we didn’t want to just adapt a dance piece from stage to film. We wanted it to be immersed in, and subject to its surroundings. Tom (the film’s director and DP) found a beautiful old castle in Helsingor, Denmark. The place had a historical grandeur but was also in a state of disuse and decay. We found that it held a beautiful relationship with the movement, as well as the musicians. The music we chose is an impassioned piece by Beethoven. The emotions of it crash through you. In the space of the castle, with that powerful music, we began to play with ideas of confinement and freedom… of the tension between claustrophobia and a sense of belonging. 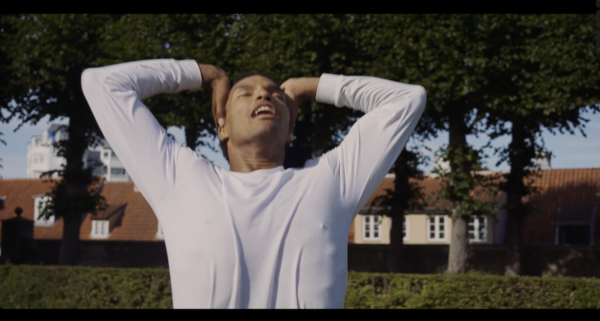 We first heard about Dare to Dance in Public Film Festival through Zoe Rappaport, (D2D Creative Producer). But the festival drew us in with its unique platform. It spotlights works that all share a common idea, yet all have such diverse and distinctive voices.”

D2D is honored and thrilled to have had Geister. Please enjoy it below.

If in search of a film that’s the polar opposite of Geister, one need not look much further than Smokestack Lightning, a vibrant, youthful, wildly entertaining and original dance short. Shot on location at the Long Beach Scottish Rite Cultural Center, palette and production design are juxtaposed beautifully with the costume design and small production details. It’s full of vibrant color, quirky set pieces, and although shot live it cleverly incorporates moving, zoom like boxes as edit wipes and to define negative space on an otherwise black screen. And it is inventively site-specific.  It would be difficult to characterize this wonderful short this much better than its’ own liner notes, which offers it as: “An escape from reality, we follow two strangers through a sizzling, quirky outburst of dance in a retro-futuristic, parallel world… devoid of time and relieved of convention.” 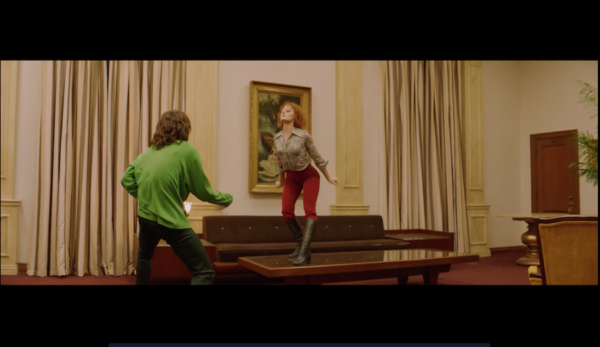 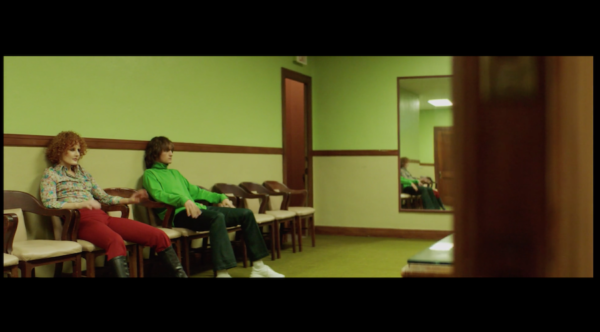 Smokestack Lightning’s camera work by Ian Coad beautifully covers the wonderfully clever, choreography by the two directors, Charissa Kroeger and Eric Schloesser, who also dance in it and employ the site brilliantly. Accompanied by Howlin’ Wolf’s incredible song of the same title, it’s impossible not to be consumed by the world that’s created herein.

D2D received this film, our last submission, minutes before the deadline closed, and I viewed it gob-smacked, as I know one of its directors pretty well and had no idea of its existence. As a first film venture, it’s pretty damn stellar.

We asked the team about the impulses and inspirations behind their film:

“Smokestack Lightning developed as a means of providing reprieve from hardship. The film is a nod to the wartime escapism that flooded culture during the WWII era— a time where life was full of adversity and the world was under siege. We wanted to create something that would entertain and relieve people of their circumstances, even just for a moment. Graced with hummable tunes, vibrant characters, and fantastical spaces — everything we were lacking during quarantine — Smokestack gave us an opportunity to escape ourselves… Our inspiration boards were peppered with 70’s Diane von Furstenberg, Golden Age candid photo shoots on the Paramount lot, Mad Men, Pulp Fiction, etc. And of course, THE SONG. Originally performed by the inimitable blues artist Howlin’ Wolf, this cover by The Animals had a grit and rawness that was yearning for movement… that which we had to create. 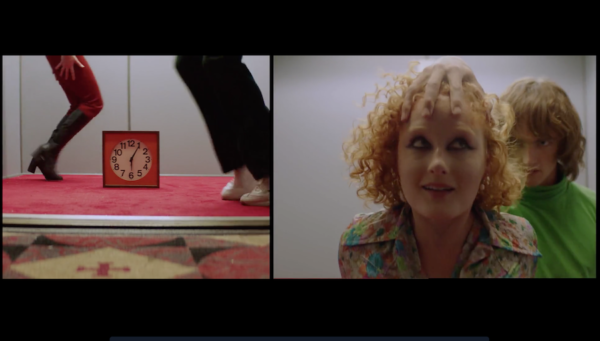 “As first time filmmakers, this whole film festival submission process has been fueled by both our naïveté and curiosity. That being said, there were a select few festivals that were on our radar from the start — D2D being one of them. This festival truly feels like it is the voice of our dance community, and the caliber of the judges curated for each submission round is top notch. The opportunity to get their expert eyes on our work is truly a gift. We are honored to be amongst this stellar group of award winners! Special thank you to Sarah Elgart.

“This film has been very dear to our hearts and we hope it reaches far and wide. It has ignited us with a strong pulse of vitality and trust in the power of our imagination. We hope it transports viewers to a special place as well; a moment in time to bring reprise and elation. We are both interested in film, TV, and fashion, and we hope that this film can open doors for us to collaborate with designers, art house filmmakers, and more of the like.”

Thanks Charissa & Eric, for trusting us with your baby!  You can enjoy a teaser for Smokestack Lightning below.

P.S. Coming soon, we will be announcing the judges, dates, and other info for our virtual festival, where you’ll be able to see all of D2D’s Award Winning and Honorably Mentioned films, as well as our amazing Official Selections from Dare to Dance in Public: Round 4!