Richard Jones: "I Call My Mother Once a Week" 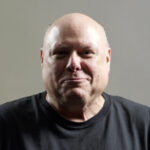 Richard Jones is the director of the Creative Writing Program at DePaul University, as well as the author of five books of poetry. The most recent is The Blessing, published by Copper Canyon Press.
*****

I Call My Mother Once a Week

My mother lives in a land
of disaster and tragedy.
Yesterday on the phone
she said, Look, a small
white plane just crashed
in the yard. Good thing
it didn’t land on the house
I said, not knowing what to say.
It was like the time she’d said
The house next door burned
to the ground, and I’d said,
You’re kidding, and she said,
It was an inferno, then asked,
because I know about words,
if she had used the right one.
I said inferno was exactly right,
and she added that it was night,
pitch-black, and the young
family of four had died in the fire.
They couldn’t be saved? I said.
They couldn’t be found, she said,
and in the silence on the phone
we could almost hear the flames.
To change the subject, I inquired
about her crazy friend, Nancy.
Nancy was always up to something.
Arrested for murder, my mother said.
What? I said. She hired a hit man
to kill the wife of the man she wants
to marry. Tragedy is, the man
didn’t even really know Nancy.
Of course there’s nothing to say
in response to a story like that,
so I just said, Sounds like true love,
and my mother said, It does, doesn’t it?

Cultural Weekly is proud to premiere this poem by Richard Jones.

Richard Jones’s most recent book of poems is Avalon (Green Linden Press, 2020). His many poetry collections include Stranger on Earth and The Blessing (both from Copper Canyon Press). A new book, Paris, is forthcoming from Tebot Bach in 2021. Editor since 1980 of the literary journal Poetry East, he curates its many anthologies, such as Origins, The Last Believer in Words, and Bliss. In 2020 he published Poetry East 100, a 40-year retrospective of poems and paintings.