There is a whole world of different gaming services and platforms available to players in 2021. Here we take a look at services that have managed to distinguish themselves from the pack by offering innovative new experiences and ways to play. Whether that’s through utilizing the latest in streaming technology to bring flagship games to your fingertips, or empowering you to create your own games, these represent the most exciting developments in gaming today.

Sometimes to innovate you need to look to the past for inspiration. Plex is a TV streaming add-on that provides content from the likes of Warner Bros and MGM. While this is great, it does little to distinguish it from other similar platforms out there doing the same thing.

However, Plex’s new service is utterly unique and plugs a corner of the market hitherto un-catered for, that of on-demand retro gaming. Plex have teamed up with none other than computer gaming legends Atari to bring classic retro titles like Missile Command and SkyRaider to your living room 40 years after their initial release. In what is hoped to become something of a retro gaming Netflix, Plex are offering Plex Arcade as a monthly subscription for just $2.99. If that’s not enough to sell you on the idea, Plex Arcade lets you pair any Bluetooth enabled game-pad with the device, and offer the ability to side-load your own ROMs onto it making it a one-size fits all retro game emulator.

The established gaming service PokerStars Casino offers online versions of traditional table games such as Roulette and Blackjack available in a range of variants to explore. Additionally, it hosts a wide range of slots titles to play.

What makes this platform an innovator in the space is the inclusion of live dealers and rooms, giving a good sense of immersion to the experience and providing the opportunity to connect and interact with other players. It can be accessed online from a browser or through a mobile app which is available for both the iOS and Android ecosystems, enabling you to play on the go.

This platform is a unique game client and community built around a streamlined programming toolkit which aims to make game creation accessible to novices and experts alike. This democratic set up means anyone can take a simple idea for a game and bring it to life.

To date, Roblox’s 150 million players are responsible for creating over 40 million games on the platform. These titles range across platformers, races, shooters, and comical simulators, with many taking inspiration from popular culture. The platform is growing fast and was recently floated as a public company valued at $30 billion. Much of this valuation comes not from what Roblox is today, but what its creators intend for it to become in the future. A collaborative three-dimensional space that will look more like the Facebook of tomorrow than another online game. Go check out why this unique community platform is garnering so much interest. 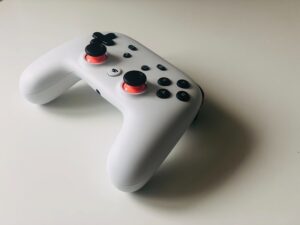 Google’s Stadia service joins Nvidia GeForce Now, Xbox Game Pass and Shadow by Blade in offering a new solution to those wanting to play the latest console titles without shelling out for a PlayStation 5 or new gaming PC. Rather than tasking your hardware with running these graphically demanding games, these services do the legwork server-side and stream the gameplay footage to you instead.

This means that for a humble subscription free, you can play the likes of Cyberpunk 2077 using nothing more than a web-browser. This opens up the ability not only to play these titles on a computer or TV, but on the smartphone in your pocket. The convenience and affordability of platforms like Stadia look set to disrupt the way people choose to game in the future and will undoubtedly begin to influence the way games are marketed and sold as this medium grows in prominence.

Photo by Lorenzo Herrera on Unsplash