Kareem Tayyar and the Complexities of Joy

I had my students study the work of Kareem Tayyar in my Introduction to Modern Poetry class this last semester, and in it we wrestled with the question of what is joy. The answer that they came to at first, which I expected they might, was that joy is a kind of appreciation of simplicity. They demonstrated that by pointing out some scenes from Tayyar’s work. In these joyful poems of his, there is simplicity. However, as they continued to work, they came to a new conclusion which is that joy and Tayyar’s work about it, are not as simple as they first seem. Joy, as Tayyar presents it is often found in simplicity, but only as a reaction to the complex process of dealing with meaninglessness and pain. So that it is finding meaning through simplicity after being caught up in something far more difficult and acknowledging that this happiness is only in relationship to future and past difficulties. Tayyar finds joy in meaning in so many ways, but again and again, he shows how to find it in love and art as he moves away from that which subverts meaning for him.

Of course, Tayyar has experienced the loss of love, but he keeps his poetry and prose focused on those moments when love is present. His first novel, In the Footsteps of the Silver King, follows Patrick, whose Iranian father has died in Iran. He goes on a quest to find his father’s silver medal. In the hands of many writers, this would have been a painful soul searching discussion of the pointlessness of life. However, Patrick finds the point in reconnecting with his father’s past and the people his father loved. He finds hope in seeing the world through his father’s eyes. Similarly in his second novel, The Prince of Orange County, an American son, Thomas, has been left for a father who has returned to Iran. Again, in the absence of that father figure, Thomas is able to internalize what his father has done for him and make meaningful relationships that are powerful even though they are brief. It is through the loss of the father, not despite it, that he finds joy.

This kind of powerful message about love and relationships can be seen throughout his work. One of my favorite collections is his Scenes from a Good Life, where again he celebrates his father, who is not dead but missing from his life. Like Thomas’s and Patrick’s father, he has returned to his native Iran, but Kareem is not interested in the loss. He is interested in celebrating the man he loves. In “Fountain Valley Bullitt,” he compares his father to Steve McQueen. He writes:

Driving like an Iranian Steve McQueen,
Taking Orange County Hills at thirty-five
Over the speed limit, windows down,
Seat belt unfastened, running as
Many reds as he could,
…
Some of the best days of my life
Were in the passenger seat of
That car, the young impressionable,
Newly promoted detective whose
Awe of his partner often manifested
Itself in a paralysis of fear it took
Him years to understand (9).

Tayyar chooses to see his father in the mythic terms of the 1970s American cinema. Where others might have found loss, he finds appreciation for what he has gained. No one in his work is treated with contempt. All are shown a kind of love as he is able to see them with the nobility they have and are striving for. He treats girlfriends, relatives, and friends with the same appreciation that he has for his father. 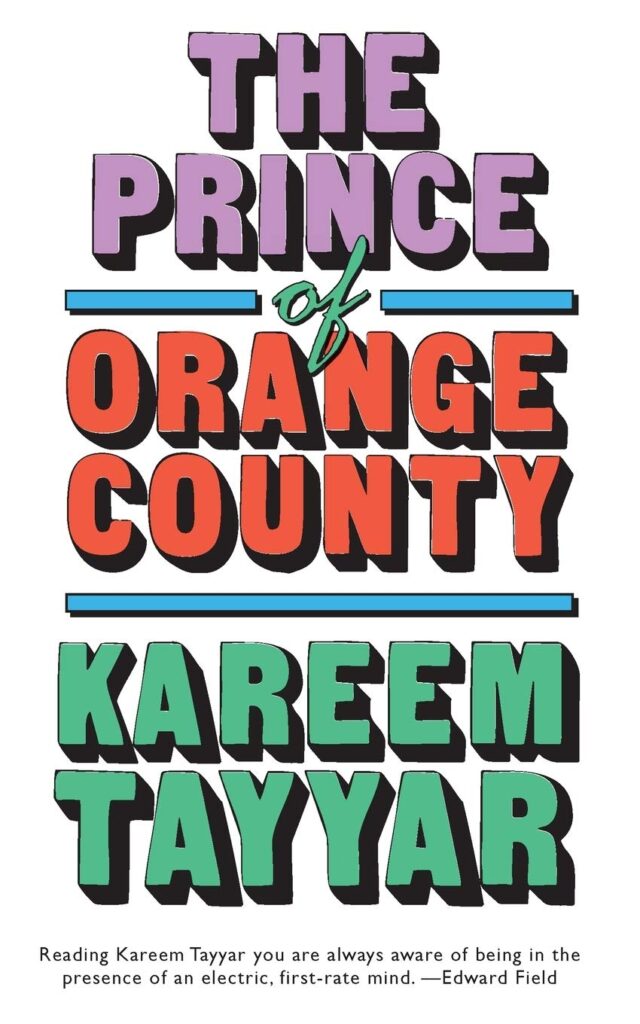 It is not just in relationships that he is able to find this joy but in the appreciation of art. He has a soft spot for popular music especially classic rock and country. I personally have been so inundated with it, I have stopped hearing it. For Tayyar, the musicians of the 60s, 70s, and 80s are a source of wonder. He writes of Merle Haggard:

You still have so much that you could tell them,
About what it feels like to fall in love a second time,
About the special kind of fear that comes with realizing
An addiction is stronger than your spirit is,
About the type of poetry that a person can produce
When he has nothing left to give another

And he often develops a discussion of the joy he feels losing himself to the visual arts or to poetry. In Scenes from a Good Life, his “Van Gogh Museum, Amsterdam,” is an ekphrasis of emotion rather than concept. Once again, he shows us how joy might be found in experiencing art. He describes the emotional experience of standing before Van Gogh’s art and experiencing that art with another person:

We held hands, we smiled at each other,
We marveled at the way your paintings moved us,
Spoke in whispers as if we were
Within a church that deserved our reverence (54).

He does not describe the art, nor does he need to. That’s not the point. The point is recapturing the communal experience of art, and he does that well.