Ma Rainey Sings the Blues with Passion and Rage

In the 20th century, the number of African-American playwrights who have had financially successful, non-musical productions on Broadway can be counted on the fingers of one hand—Lorraine Hansberry (A Raisin in the Sun) and August Wilson (Fences, Joe Turner’s Come and Gone, etc.). The situation has not improved much in the 21st. The record of transferring the plays of these authors to the screen has been even spottier. Hansberry’s Raisin was brought to the movies within two years of its New York stage debut. Her career was cut tragically short by cancer at the age of 34. Wilson had greater longevity and did complete his ten-play cycle of the black American experience, but he passed away at the relatively young age of 60. Despite his two Pulitzer Prizes and eight New York Drama Critics Circle Awards, it took nearly 30 years for Fences, Wilson’s greatest stage success, to reach the screen. Now, after an even longer lacuna, Wilson’s breakthrough play, Ma Rainey’s Black Bottom, has found its way to the screen in a compressed, shattering rendition adapted by Reuben Santiago-Hudson and directed by George C. Wolfe. (There had been a TV adaptation of Wilson’s The Piano Lesson in 1995.) Due to the coronavirus crisis, the Ma Rainey film may be enjoying an even wider audience that it would have otherwise received since it is available on Netflix. 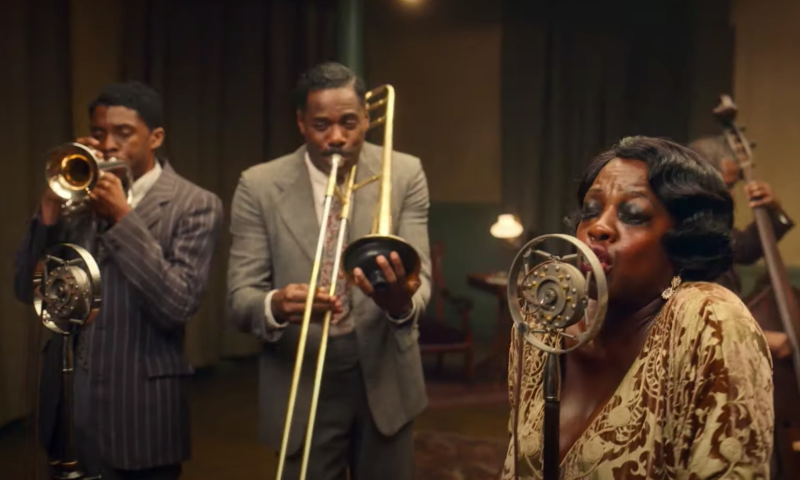 The original 1982 play had a rambling, loose structure with the central plot—if you can call it that—centering on a group of black musicians waiting in a 1927 Chicago sound studio to record the title song and other tunes by the real-life Ma Rainey, a tyrannical blues singer and entrepreneur. As they rehearse and attempt to kill time until the perpetually late Ma arrives, the quartet exchange stories and philosophies on the African-American condition. The film, with its tight script by Santiago-Hudson, does not go far beyond the stifling music studio, but the scenes of the white working-class neighborhood intensify the sense of oppression the black characters feel. Even buying a Coke at a drugstore becomes a frightening experience as they are surrounded by hostile whites staring ominously at well-dressed the African-American musicians. There is also the added device of a locked door in the rehearsal room—similar to the broken window in the film of Fences—symbolizing the frustrated hopes of the characters. When it is finally broken open, it fittingly leads to a dead end. 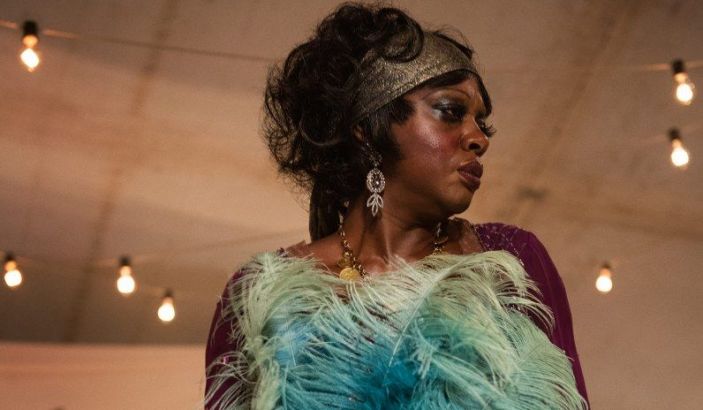 The film does sacrifice some of the rich, thought-provoking dialogue between the four musicians as they clash over dealing with racism. Trumpet player Levee (the late Chadwick Boseman in a fiery final performance) conceals a molten rage with smiles in front of the white music producer, then reveals his anger in a furious monologue. Trombonist Cutler (Coleman Domingo) takes refuge in religion while bassist Slow Drag (Michael Potts) and pianist Toledo (Glynn Turman) are more practical and less volatile. The shortened script (the film runs less than 90 minutes) focuses on the central conflict between Ma (a nearly unrecognizable, fearsome Viola Davis), who rules her boys and her brand with an iron fist, and the similarly steel-willed Levee, who has ambitions to start his own band. Both seek to express their art without constraint by the racist producers and agents, and respond with rage when thwarted. 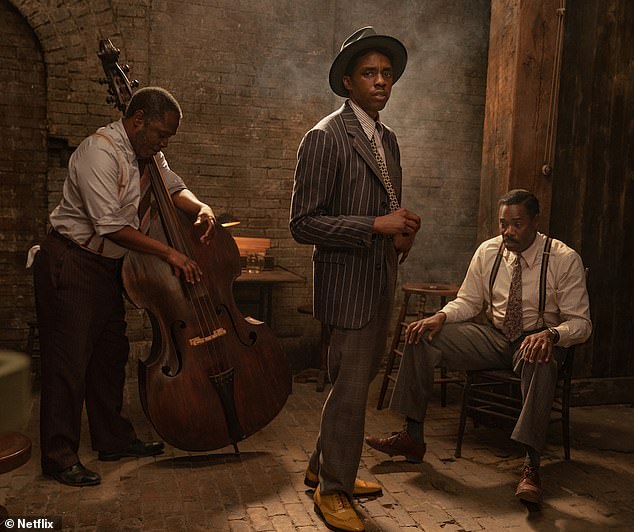 One of Wilson’s main themes is how racism twists its victims and forces them into destructive actions, even against their own community. Ma is a vicious diva, berating her white manager (a sniveling Jeremy Shamos) and demanding her stuttering nephew Sylvester (Dusan Brown) deliver the title song’s spoken intro, even though it wastes several takes. She seems like an unreasoning tyrant, but Wilson provides her with deeper dimension as she explains to Cutler that the white establishment would rob her of her talent once it’s recorded on vinyl and her demands are the only way of maintaining control. Levee is just as determined as Ma, but not as clever. They battle over the band’s style and the affections of Ma’s lesbian lover, Dussie Mae (Taylour Paige), but Levee is the ultimate loser. After Ma fires him, Levee loses his future when the white producer Sturdyvant (Jonathan Coyne) brushes him aside and he tragically turns his anger on Toledo over a petty slight. 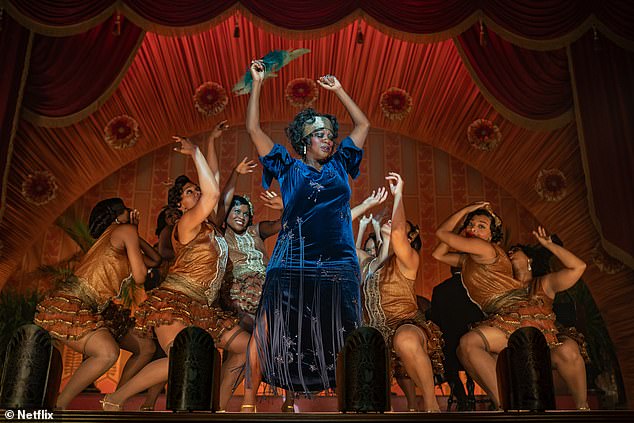 In the stage version, Ma is a supporting character, but here Davis makes her a center of gravity. Covered in unflattering make-up, her teeth capped with razor-like gold, padded in a fat suit, Davis transforms herself into the commanding, unstoppable Ma. Though her singing voice is mostly dubbed, she carries herself as if she is the incarnation of the blues. Boseman is equal as a competing force of nature. Originally played by the much bulkier Charles S. Dutton in both original Broadway production and in the 2003 Broadway revival, Boseman is just as intense. He is a spry cat rather than a menacing bear like Dutton, full of explosive emotion, seeking an outlet. Coleman, Potts and Turman also provide fully-fleshed characterizations as musicians struggling to get along and maintain a degree of dignity.

Boseman died of cancer not long after filming was complete. Ma Rainey is a sad testament to a potentially great acting career cut short and to Wilson’s imperishable legacy. Fortunately, there are plans to film the remaining works in the playwright’s 20th century cycle.