On Carrying On: D2D Films Alone Together & Earth Odyssey

As the pandemic hit in 2020 and we began to look out—hesitantly at first, from amidst the dust of the fallout for signs of how to carry on—dance was one of the few art forms that swiftly and deftly picked itself up from the rubble and rose to the challenge. In the face of closed theaters, cancelled company tours, and decimated revenue streams, zoom and dance films created remotely became seminal platforms for schools, companies, choreographers, and presenters longing to preserve some semblance of normalcy. Many dance films were made specifically on and with the zoom platform, structured for multiple dancers to appear in small vertical boxes on our screens, and of course like anything some were insanely clever and some not so much. But beyond that they were all important for reaching across borders and boundaries of time, space, and distance to create connection.

D2D rose to the challenge of the virus by allowing submissions of dance films made inside—not only made in the public realm – and in creating the theme of “Pandemania!”. And because of or perhaps in spite of everything, we received many incredible submissions in this vein. Two films, equally beautiful in completely different ways, were Cubique’s stunning Alone Together, which won an award for Best Remote Collaboration, and the brilliant Adi Halfin’s film Earth Odyssey, which received an Honorable Mention. We asked them both about what led them to create their films.

Cubique had the following to say: 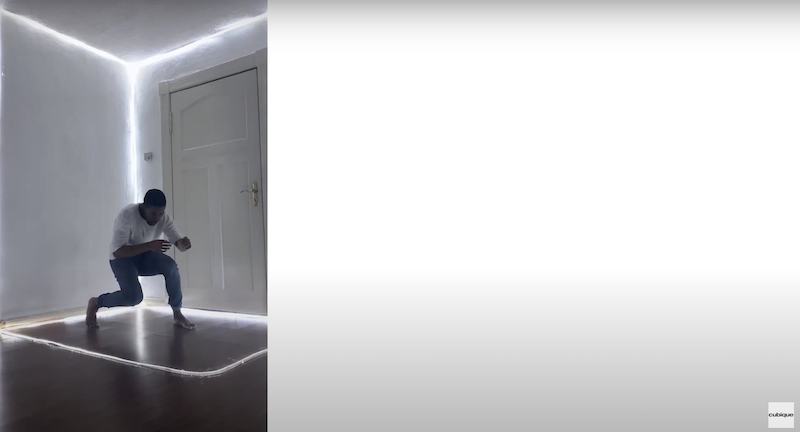 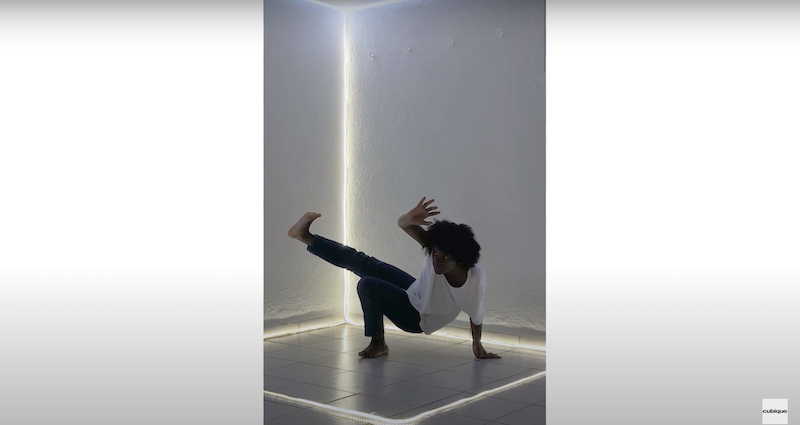 “In the spring of a year ago, we had planned several shoots at different locations, with dancers from Switzerland. Then came the lockdown. Our disappointment was great… all the preparation was in vain. We also missed the contact with each other—the exchange and creative work with others. However, we didn’t want to let the situation break us and so we thought about what we could do in this special situation.

We contacted two dancers who had caught our eye on Instagram. One lives in Paris, the other in Bremerhaven, as well as another dancer from Switzerland. The pandemic had brought us all—across borders—into a similar situation. We all lived in and with the lockdown.  We wanted to remove the boundaries, at least virtually, and start a creative process together. As a theme, we chose the isolation in which we all found ourselves.”

With Alone Together, Cubique fiercely worked within the confines of the imposed limitations to create something that really claimed the moment we all found ourselves in, and changed it into something remarkable. For me it speaks volumes about all the unrest, frustration, and the solitude that defined 2020. The use of the negative space that the Zoom platform inherently uses, brilliantly connects form and concept. And the work of the three dancers, Koki Lionel Tanaka, Venance Gwladys, and Gee aka Lil Sniper is powerfully visceral.

Like Alone Together, Adi Halfin’s joyous film Earth Odyssey was made with dancers from different continents filming themselves in confinement as the pandemic hit and made our homes feel alternately like sanctuaries and prisons. Earth Odyssey is a celebration of humanity, of dance as a life force, and of dancers coming together remotely through movement in the face of the pandemic. The sense of elation they seem to find in truly dancing through the everyday is a reminder of the power of celebrating each fleeting moment of life. And props to all the unbelievably beautiful dancers in Earth Odyssey: Morgan Bobrow-Williams, Vinson Fraley, Mariko Kakizaki, Doug Letheren, Yiannis Logothetis, Rachael Osborne, Ian Robinson, Or Schraiber, Bobbi Jene Smith, Imre Van Opstal, Tom Weinberger, and Leal Zielinska.

Asaf Avidan, the musician behind the film, had to say this:

“I found so much beauty in the need of people to keep on playing music from their balconies or dance together through virtual meeting applications. To simultaneously succumb to and transcend earthly limitations by artistic endeavour. These are stressful times, and maybe it helps to remember that we are all a part of a mutual story. An experience of searching for meaning and control in this storm of a life. We all go through this one way or another. And in that… We are not alone. This is our Odyssey.

“Asaf approached me before the pandemic to direct a music video for his first single in his upcoming album. We were ready to start preproduction when the pandemic hit and borders began to close. This was the first lockdown and we found ourselves, together with the rest of the world, confined and isolated in our homes.

So, Asaf came up with this idea of releasing a smaller video of dancers filming themselves in confinement dancing to “Earth Odyssey”. It was a quick and impulsive reaction to all the beautiful videos from Italy of people singing from their balconies together. We wanted to create a feeling of togetherness – something optimistic that will make people feel happy in these dark, confusing times.

Bobbi Jene Smith and Or Schraiber were responsible for casting, and they came up with an outstanding ensemble of dancers. Everybody was happy to collaborate, since they were all at home doing nothing, and I feel that we all had some steam to let out. It was the fastest process I’ve ever done in creating a music video. It was very intuitive and reactive. There was no choreography and each dancer interpreted the song in their own way. Eventually, the choreography was structured in the edit.

I got the chance to work with an amazing collection of some of the best dancers in the world. I don’t think I could ever have managed to bring them together to a project, since they’re all scattered around the world.

The reactions to the video were really moving. People wrote me personal messages telling me that this video cheered them up or made them dance during such a tough period, and that’s the biggest reward I could’ve asked for.

You will often find a dance element to my work. It’s an art that conveys emotions without having to rely on words. It’s a universal language and that’s the beauty of it. I wanted Earth Odyssey to be part of an event (D2D) that understands this and curates content dedicated to the relationship between dance and film.”

As two films created remotely, both Earth Odyssey and Alone Together are brilliant in capturing elements of our collective experience under the pandemic. It’s through the meeting of the mediums of dance—which can speak volumes without words—and film—that can so elegantly capture nuanced moments of gesture, expression, and magic in the quotidian—that we begin to understand our humanity, our sameness… and how this sameness connecting us is far greater than our differences.