When I think of the phrase “2020 vision”, the first thing that comes to mind is how much its literal meaning did not apply to the same numerical year we just experienced. Last year, with the descent of a global pandemic, its politicization in the US and subsequent 400,000 thousand & counting lives lost, and the recklessness of our then seated “President” reaching a peak, I could only pray that 2021 would provide more foresight. One thing that gave me hope was the unrest and uprisings in the streets of cities throughout the US and beyond in response to systemic racism. And I was thrilled to see how much dance was present both within and as a result of them.

Two films that exemplify this moment, each in their own ways, are Sam McReynold’s beautiful film Proclamation, which garnered this year’s D2D award for Best Emerging Filmmaker and Marta Renzi’s 4thof Deny, which was one of five films awarded an Honorable Mention. Both intersect with dance in different ways and both are powerful and relevant. 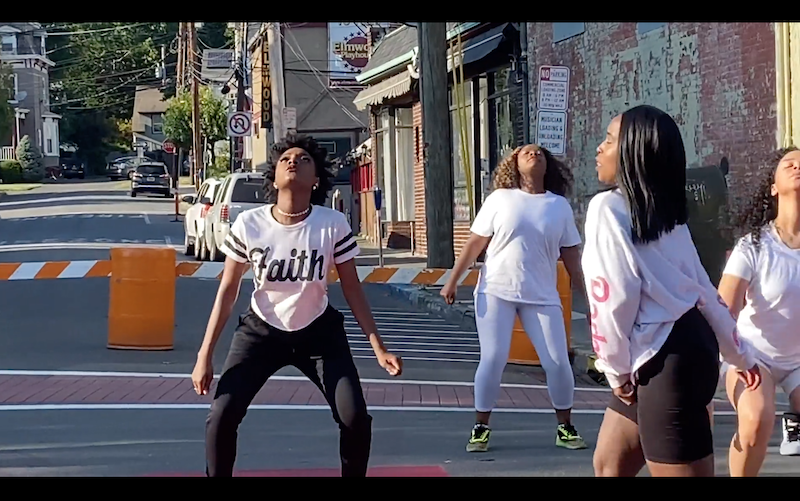 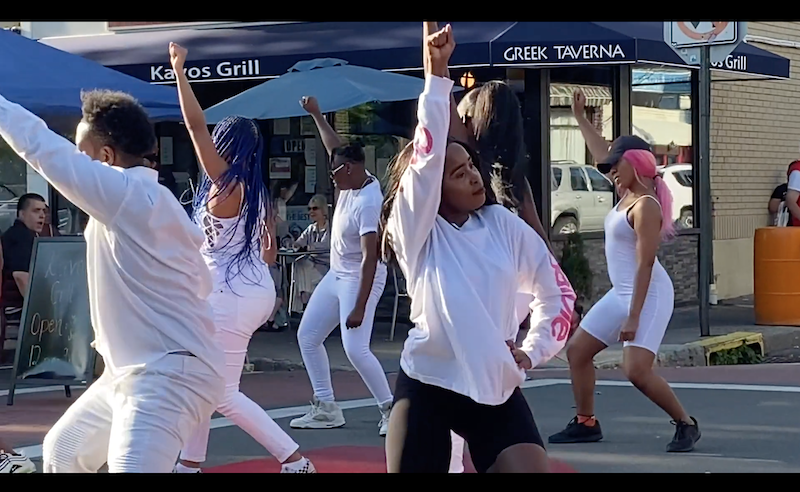 Marta Renzi’s film beautifully captures dance infused uprisings in her hometown and preserves a commemorative and incredibly important moment in our collective history. This docu-style dance short is permeated with a sense of celebration, seriousness, and community that demonstrates the beauty of what is possible at the intersections of dance, cause, and camera.

Renzi had this to say about her film:

“Beginning the day after George Floyd’s murder, folks began demonstrating daily in downtown Nyack, NY where I live.  Smarter people would have documented the full range of citizen actions leading up to a party in the streets that day that Trump was voted out of office. But I only thought to grab an occasional clip: the street we painted with BLACK LIVES MATTER, a Juneteenth celebration, a pop-up dance video shoot, and a march.

I hoped it might be a place to share a spontaneous, no-budget expression of resistance and joy. Recently, Derek Chauvin was found guilty on all three counts, which makes me dare to believe that the justice system was actually jarred by similar demonstrations, large and small, all over the US.”

You can watch 4th of Deny in it’s entirety below:

Sam McReynolds D2D Award Winning film Proclamation takes us back and forth from documentary footage of Black Lives Matter marches through the streets of Los Angeles to a sunny west coast beach where Shauna Davis dances with a stunning and serenely powerful sense of self-awareness. Save for a shot of an upside down American flag with its red, white, and blue just coming through, the protest footage is seen in black and white, while the dance footage is in color.  The dance movement, created by McReynolds in collaboration with Davis, is strong, beautiful, self-assured and innately a proclamation of sorts. Davis is a gorgeous dancer, and in Proclamation she owns and embodies the movement like her own voice, a confirmation that dance at its best speaks volumes without saying a single word. The film conceptually and editorially works perfectly with Roberta Flack’s wonderful and singularly appropriate song “Tryin’ Times”. 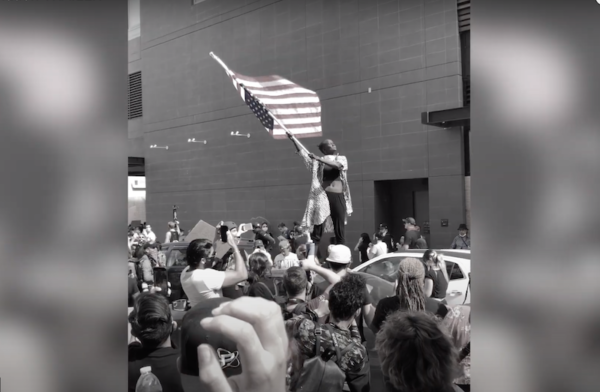 We asked McReynolds what sparked him to make this work:

“Since the Pandemic I was actually feeling very uninspired and unsure how to continue existing as an artist in the middle of all this uncertainty and despair. After the murder of George Floyd and people immediately started speaking out on the matter, at first I felt actually unsure of how to engage. I selfishly wanted to go hide under a rock, while at the same time, I was infuriated at what I had just seen happen to this man. Something snapped in me, perhaps after learning about what happened to Breonna Taylor amongst many others, and I just felt I absolutely had to take to the streets. There was no other choice. And so I started actively protesting in the BLM protests all around LA, and I was capturing a lot of footage on my phone throughout the experience. At some point, during one of the biggest protests I had been in to date, I had this overwhelming feeling of hope that was almost euphoric in a way… I was seeing all these beautiful people from all different backgrounds marching and chanting around me, demanding change and doing so with heads held high. The energy felt so electric and so pure. It was truly like nothing I had ever experienced in my entire life. Suddenly, I just started envisioning Shauna Davis, dancing freely by the ocean. It was almost all at once that I saw the whole film manifesting in my head. It was at that moment I just knew that I had to make this a reality. So I asked Shauna if she would be interested in working with me on this idea. She was all in, and so was Alex Laya (Director of Photography). Honestly, the entire process that followed flowed so naturally. It’s as if all the pieces were just there from the initial thought, and I just had to put them together. I couldn’t have asked for a better experience creating this film. It was also one of those very… very rare scenarios, where the end result was almost exactly how I envisioned it from the beginning. 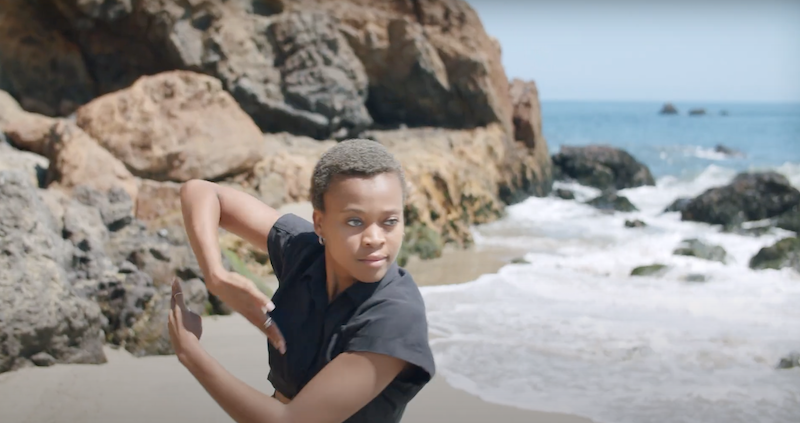 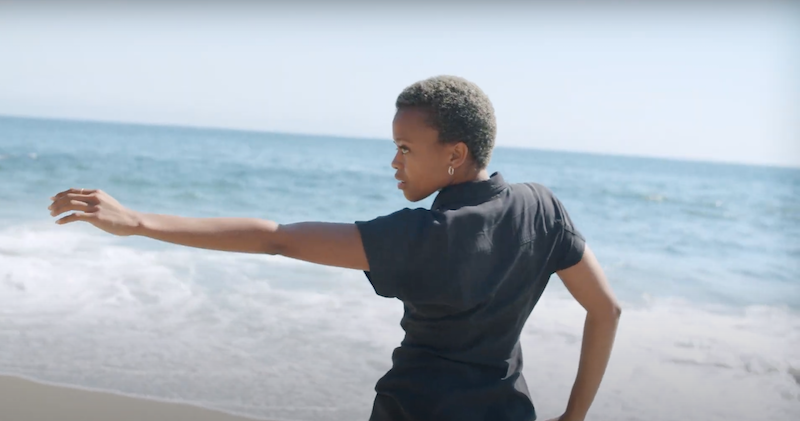 It came to my attention from D2D Director Sarah Elgart that submissions for this year’s festival were being accepted, so I went ahead and submitted Proclamation. I had actually already put the film out there on my YouTube channel, and I also made QR codes that I posted around different busy parts of LA in hopes that more people would be able to see it and feel a similar spark of hope that I felt when I was marching in the protests. I am beyond grateful that it has gotten the recognition it has through D2D, and much because of this whole experience, I am inspired to continue creating and moving forward in this ever changing world we live in.”

Enjoy a teaser trailer for Proclamation below: