“¡Pura Vida!” is a phrase used daily in Costa Rica, which means “pure life” or “simple life.” It is not a slogan; it is a lifestyle, a way of being. Although I had initially planned to make a visual memoir as my 100th documentary, I ultimately decided to dedicate this occasion to our family experience in Costa Rica six years ago. Why? To raise awareness for the urgency of the need for a change in lifestyle as needed today.

Covid-19 has globally brought us to a turning point. As it impacts the minds of billions of people since post-WW-II, the American Dream has reached a dead-end. It is simply non-sustainable. For the planet to survive and thrive, we must collectively change our mindset. Costa Rica offers a model worth studying carefully.

The 25-minute documentary presented here tells much more than I may describe in writing, so consider this blog complementary to the film. Our trip was a 1,000+ km long drive nine-day vacation on a moderate budget, which we planned to combine between nature, permaculture, and architecture. Gabby created the initial itinerary after consulting with Gabriel Saragovia, who lives in Costa Rica. Gabriel is the son of my old friend Efraim Saragovia, with whom I studied architecture at Israel’s Technion, and now lives in Florida. The Father and son duo become sustainability-conscious developers of resorts in Costa Rica. They built Rio Perdido, an award-winning project, which was one of the highlights of our trip.

Our first stop was at La Ecovilla, a community of forty families from different countries, thirty of which having school-aged children. They focus on permaculture, not just as a source of food, but also as a tool for education. 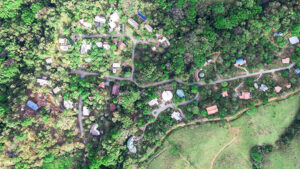 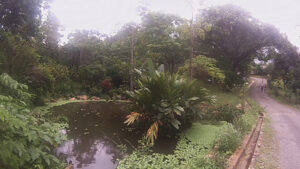 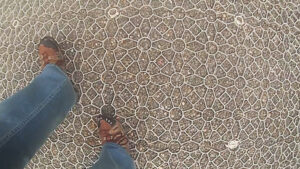 Finding La Ecovilla was not easy since the streets do not have names, and no signs were pointing us in the right direction. After climbing a rugged road carved from stone, surrounded by jungle-like vegetation, we found a nicely designed gate in the middle of nowhere. When it opened, it felt like entering another planet: Organic Architecture-inspired homes, home grown food, and community areas geared towards creating a harmonious life with nature. In other words, a meaningful message for a future based on alternative values to a consumption-based society.

After spending a few hours exploring La Ecovilla, Gabby navigated the one-lane Route 34 road through a tropical storm to our next stop, adjacent to the Manuel Antonio National Park’s entrance. The next morning, we were the first visitors of the day to enter the Park. Following a hike through the jungle, with toucans and sloths, we reached a beach that made me feel like a Spanish conquistador stepping on the soil of the Americas for the first time. Our company was birds chirping, iguanas sunbathing, and monkeys swinging between the branches.

Our next destination was Malpaís, on the northern side of the Nicoya Gulf. We drove to Puntarenas to board the ferry which would take us to Paquera, a 1½ -hour ride surrounded by a view of islands and the sinuous coast of the Nicoya Peninsula. 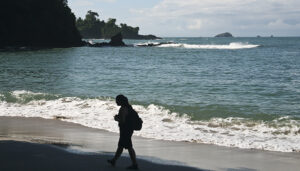 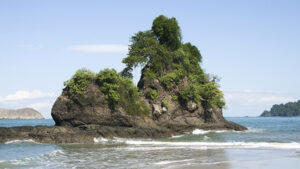 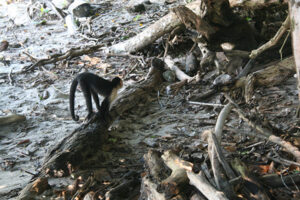 The path to our destination was an unpaved, bumpy road through the countryside of small farms and ranches. Occasionally we would see a herd of cows grazing on the rolling hills.

The hotel we stayed at provided a sense of idyllic peacefulness. Without ostentatious luxury, its sparse buildings were immersed in a tropical garden surrounded by dense jungle.

We first explored Malpaís, a laid-back small village with a rocky shore of bizarre volcanic formations and a jungle forest reaching the shore. The main road that links Malpaís with Santa Teresa was the area’s main street, with shops, markets, and stores.

After a few hours of walking on the beach and talking to people in the village, I got a sense of the vibe. It attracts young, educated people, escaping the traps of urban life. The crowd was quite international, with a strong American, Argentinean, and Israeli presence, which made us feel like a good fit for the place. On our third day, we explored Montezuma, a small village known for its multi-ethnic bohemian atmosphere of young people looking for an alternative lifestyle. It is also known for its beaches, rivers, and waterfalls.

It took us most of the next day to reach, Rio Perdido, first having to drive back through the Nicoya Gulf. When we finally got there, our first impression was a sense of overwhelm. “In the middle of nowhere,” five design firms – C2 Arquitectura, Vida Design Studio, Project CR+d, Garnier Arquitectos, and OUSIA Design – led by Gabriel and Efraim Saragovia, had created a masterful architectural complex with virtually no land movement.

In respect to the existing natural land it sits on, the facility includes a unique thermo-mineral gorge with eight hot springs. The hotel’s main area was conceived to minimize the number of columns and ease the view of the surroundings. The prefabricated bungalows elevated above the original topography, give a sense of peacefulness, with a 180-degree view of vegetation. The place also has multiple swimming pools at different water temperatures.

Passive cooling techniques were applied throughout the facility that requires little to no maintenance. An “aerodynamic architectural structure” proved to be very effective in properly channeling the currents during the 4 months of heavy winds that this area experiences. Water use was taken into consideration as part of the reforestation effort for the native plant species. The treated water is directed towards the irrigation of thousands of plants. 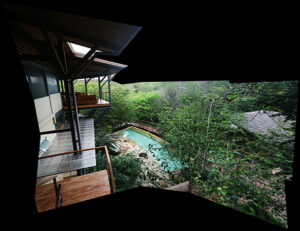 Besides the architecture, the Rio Caliente hot water river is in itself, an important reason to visit the place. It is not only relaxing, but also has medicinal properties used by the natives for generations. For those in search of adventurous excitement, this ecotourism includes a state-of-the-art Zipline course which loops across the main canyon, tubing through the winding currents of Rio Perdido and trails for walking, hiking and mountain biking. Our final stop was at the La Paz Waterfall Garden and Zoo, near the Poás Volcano. This is a lush tropical forest with a huge waterfall, and many species of local wildlife, including birds, insects, monkeys and leopards. 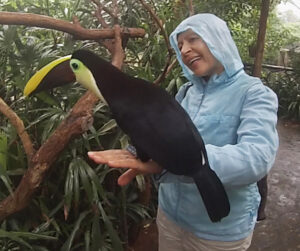 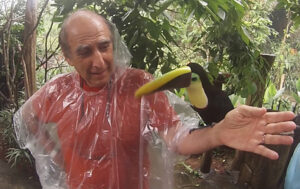 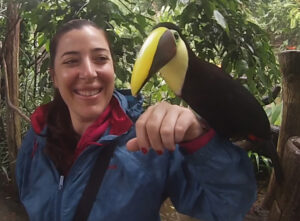 We are currently living during the worst global pandemic of the past century, the worst recession since the 1930s, and now we are on the cusp of one of the most critical elections in recent American history. The future is now, and it is daunting. Costa Rica, besides its natural beauty, is a stable democratic republic with a long list of attributes: it is the greenest country in the world, home to the highest density of animal species; It produces 99% of its electricity from renewable sources, has had no army since 1949, and spends 7% of its budget on education (U.S.: 3.5%.) There is much to learn from this small country. favorite
Tags:
Previous Article
The Joy Ride
Next Article
The Evolution Of Bingo In The Modern Age And Its Potential For The Future