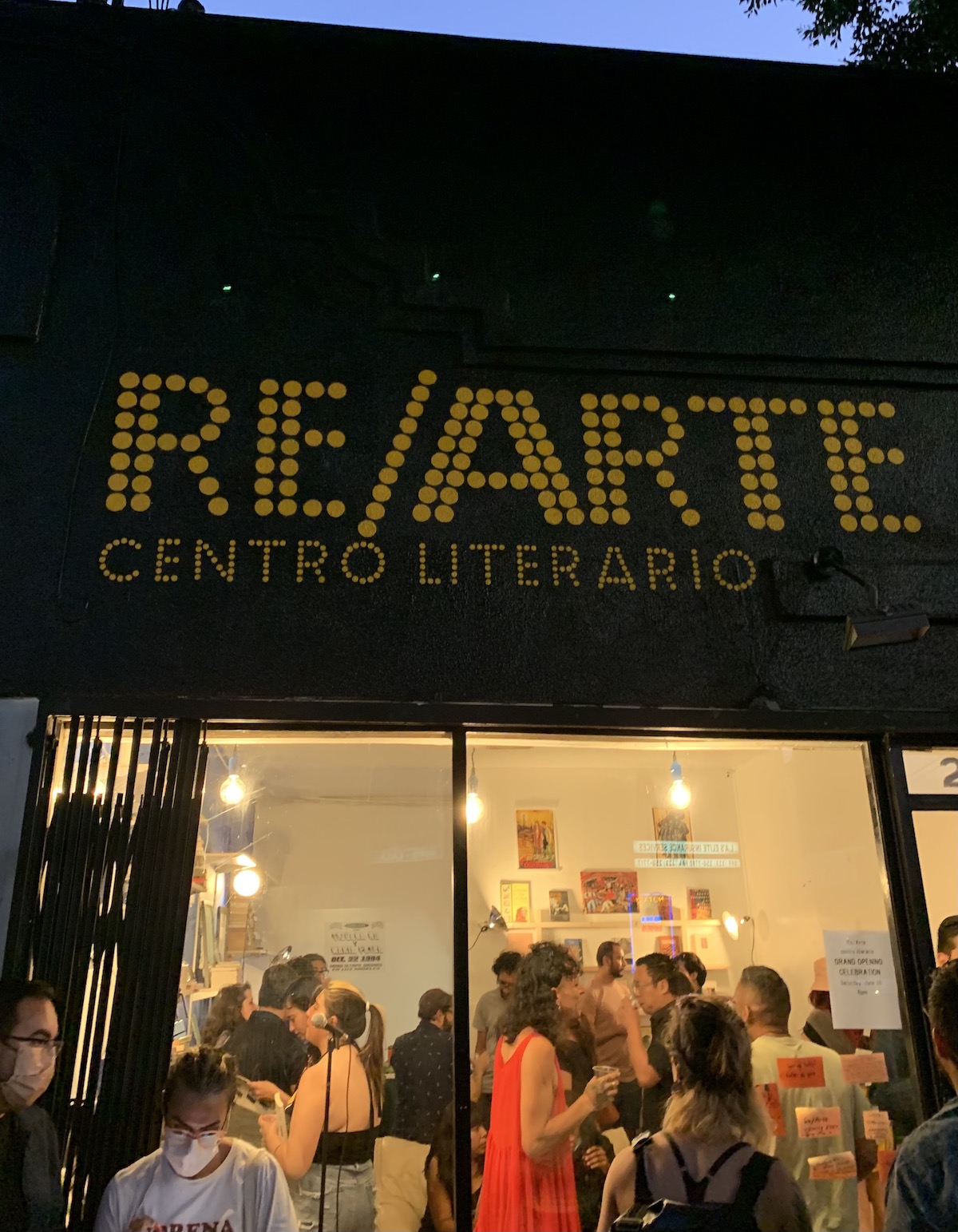 Bright, colorful, and bustling with creative energy, Re/Arte has been in constant movimiento since its inception, featuring book launches, literary talks, Film Night, photography exhibits, Children’s Storytime, and a Wednesday night open mic, Grito de Boyle Heights, with political poet Matt Sedillo offering free writing workshops before the weekly event. Padilla describes these open mics as “the heart of Re/Arte. I take pride in having a place where people can come and express themselves and letting it be as raw as possible. I find that to be key to this place—having a place where you can just come and express yourself.”

Although Re/Arte is new to the Los Angeles’ literary scene, its creator Viva Padilla is not. As founding editor of Hombre Lobo, Ponte las Pilas Press, and Dryland, an independent literary print journal born in 2015 in South Central Los Angeles, Padilla has published hundreds of BIPOC writers from Los Angeles and beyond, many of them being published for the first time. 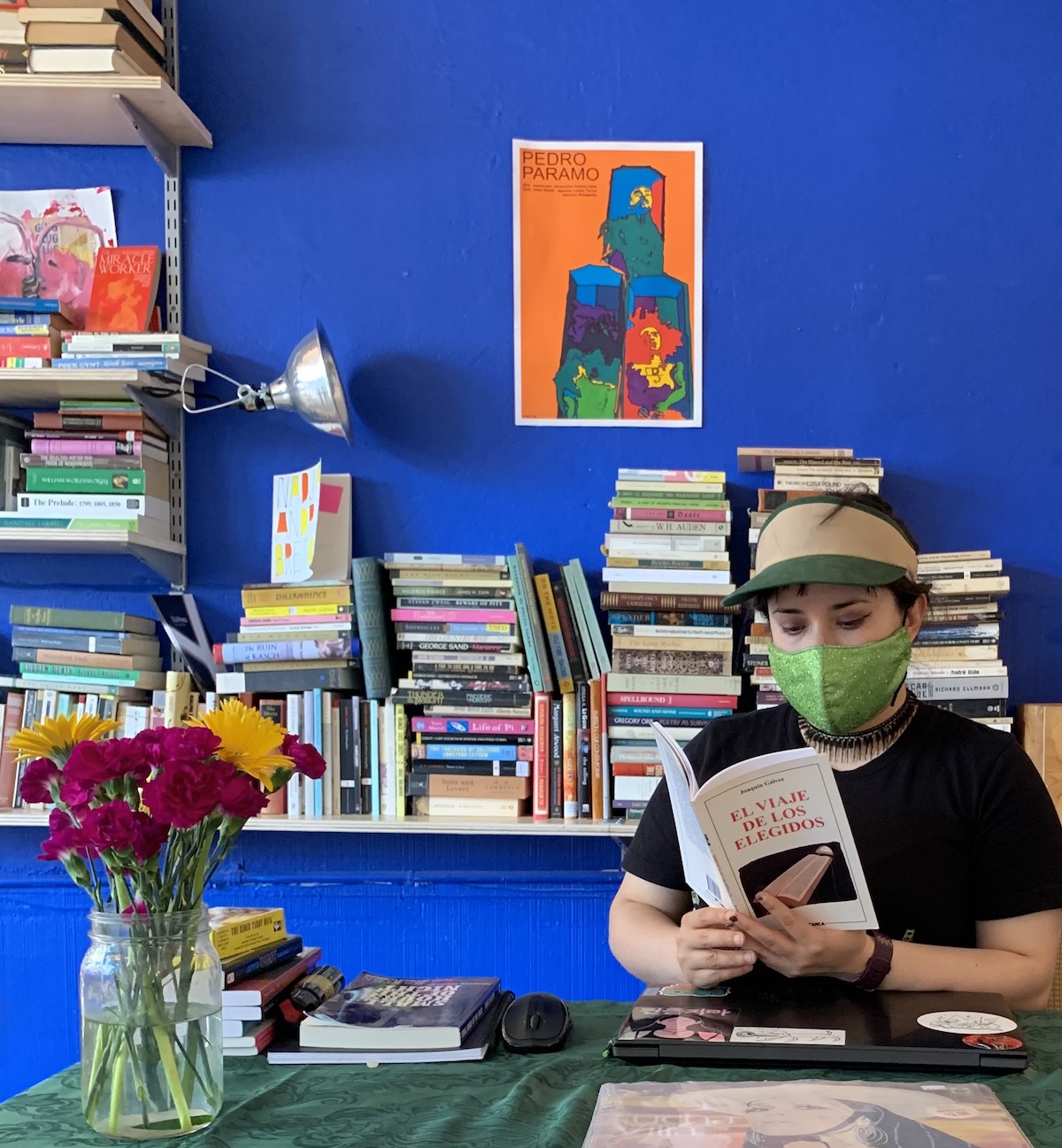 Manifesting a physical space to house her already existing literary projects and to launch new ones seemed ideal to Padilla. Aside from being tired of being at home during the pandemic, she shares, “I’ve always wanted to open up a space and I had the opportunity. It was perfect timing. I’ve been existing online, working from home, and it’s not the same as having your own spot where people can meet you and come see what you’ve actually built. When the opportunity came up to build something in the physical world, I decided to take it.”

Essential to Padilla in relation to Re/Arte is having a space that is not commercialized. “I want Re/Arte to really be a place where people can just hang out and don’t feel they have to leave because they didn’t buy something. I tell people who come in, you can come and read here. You can talk to me about the book. Maybe I haven’t read the book, maybe I have. But we can talk about the book. Go home, go read the book, bring it back, and we can talk about it. Put it back on the wall, get something else.” 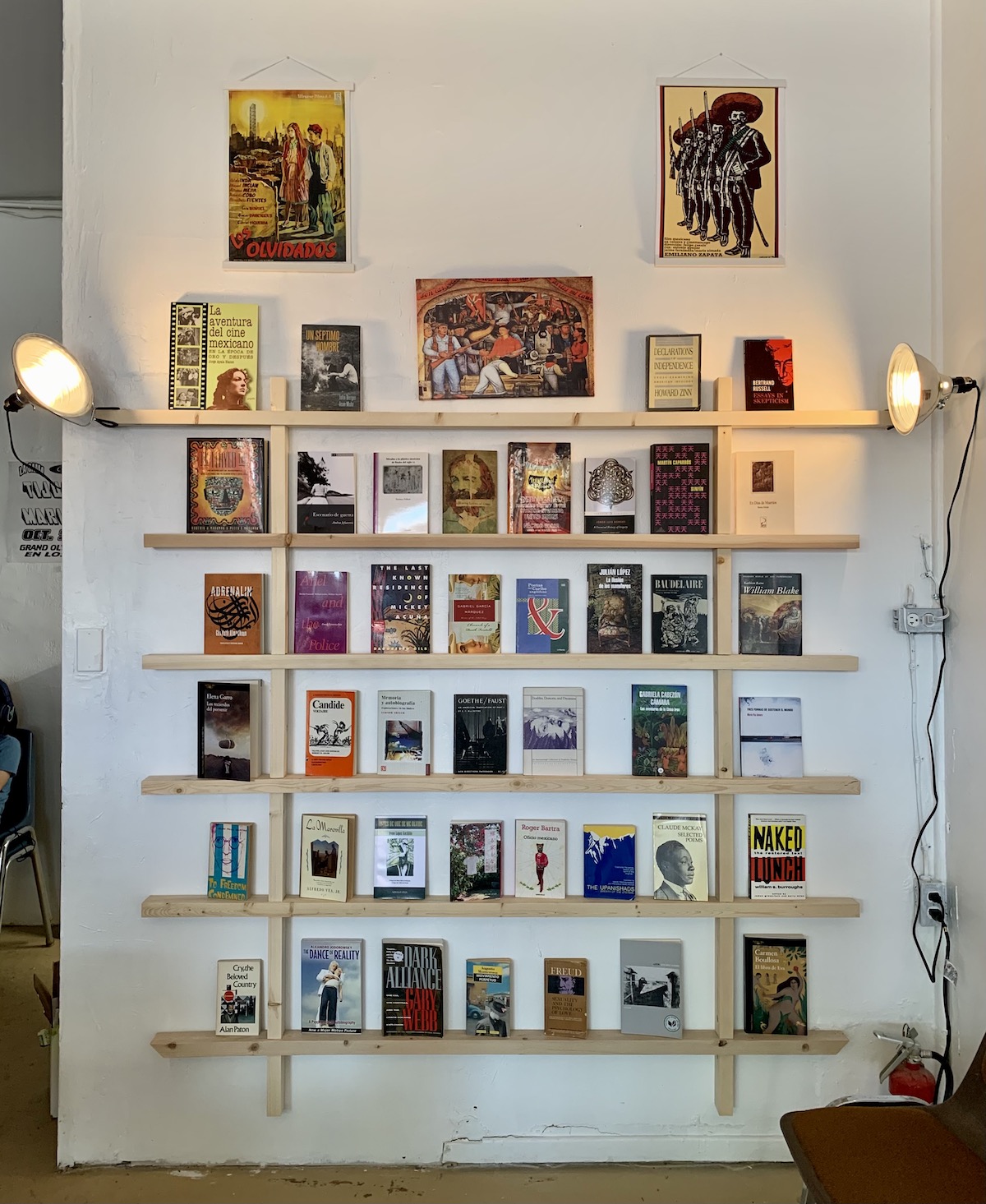 Also exciting is that Re/Arte is evolving in the here and now. “I feel like I’m still imagining as I’m manifesting,” shares Padilla. “I’ve just been seeing, envisioning, asking, what else can I do? What else do I want to do? What would be cool? It’s so funny because I’m already here and when I ask myself what else would I want, I think—you’re already here, just do it.”

In regards to the unfolding future, Padilla foresees many exciting things. “More connections with new people, more collaborations, more art coming into the space that is not just literary. I purposely set up the space so it’s not just a bookstore. It is very literary, but it’s also more than that. Literary people, us writers, we love all art. We are always learning how to express ourselves by seeing the other mediums, so I think it’s important to have a multi-functional space where we can have not only literary stuff, but where we can have art, music, comedy, and lectures on lo que sea.” 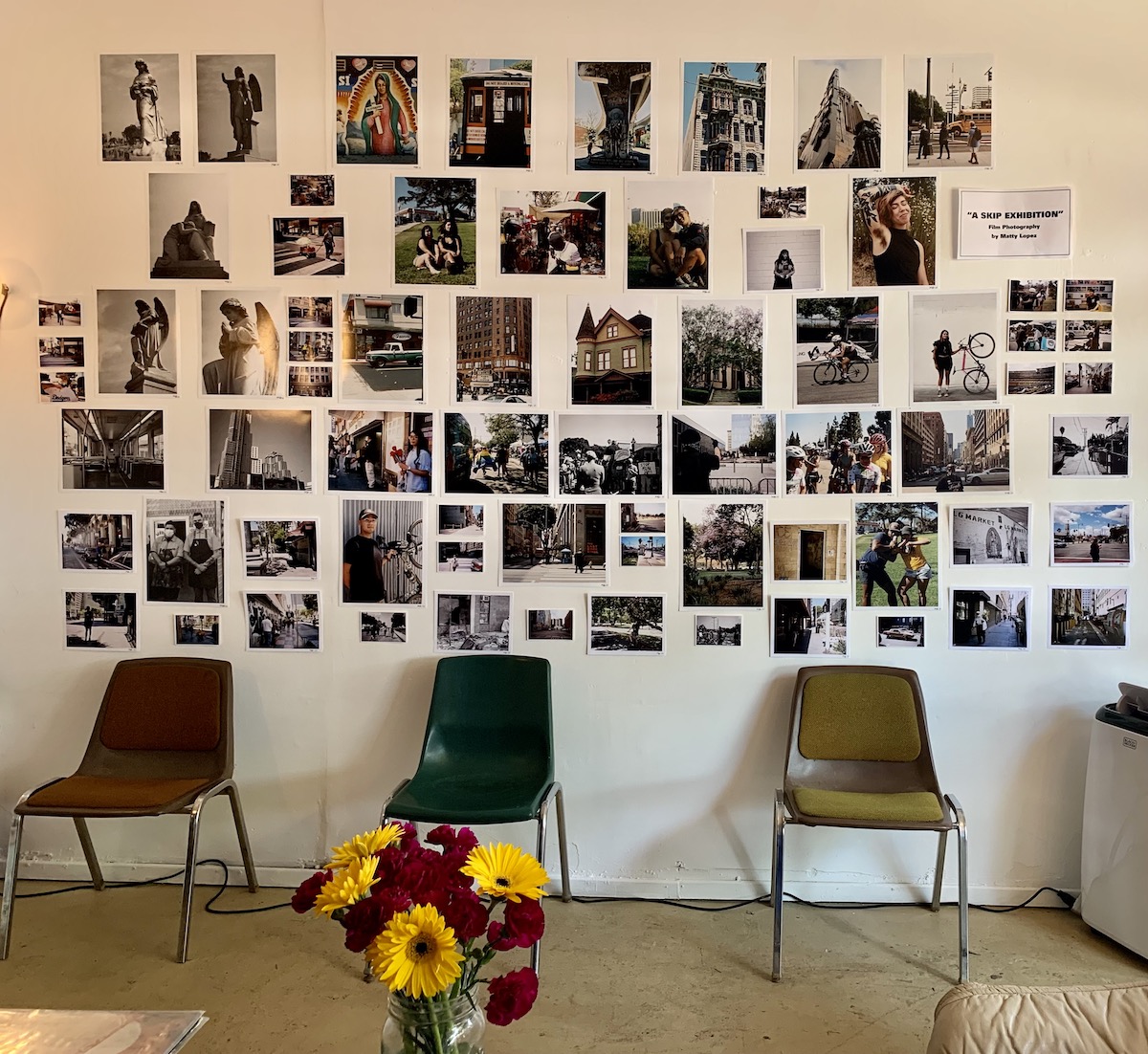 Making culturally relevant literature accessible to people in the community, especially young people of color, is both personal and political for Padilla. As a poet and publisher, she is well aware that books can be lifelines. When she was growing up, Padilla recalls wanting certain books so much she would steal them from libraries. “Many books have been stolen by me, or I should say ‘borrowed’ by me because I always give back,” says Padilla. Padilla’s story about stolen books sounds both subversive and familiar. I have heard similar stories from other poor / working-class writers of color, and frankly as someone who stole her own share of vinyl records from the East LA Public Library back in the 1980’s, I can relate.

Padilla continues, “I grew up going to libraries…That was important for me in high school. I was always reading, either at my house or like I said at the library. I want to have that space for them [young people of color] too, but also a space that is unlike the library because you can’t always talk to the librarian about being a Chicana because even in the libraries by my home when I was growing up, the librarians were white mostly, so it wasn’t like I could talk to them about my life experience. Cultural exchange / meeting of minds, I feel I can offer that in my own capacity.”

The programming at Re/Arte is, as Padilla points out, centered on Black and Brown people and this is, of course, intentional. “I’m in a mainly Chicano neighborhood, so that’s what I want to pull out of the earth, nurturing what we already have, putting it on display, celebrating and showcasing it.”

In addition, Padilla really wants to give back to the younger generations. “That’s kind of where my mind is. I’m not really thinking so much about how I can keep catering to the literati. I’m thinking, how can I help the kids that are the age I was when I needed help. When I was in my 20’s, when I was in high school. How can I help them? And they have come in, a lot of young mujeres asking me for books. For me that’s where it’s at. Those are the people I want to reach. Those are the people I want to give back to. And the thing I can offer is poetry and publishing. Those are my gifts. Those are my offerings.”

When asked what it’s been like since she opened up Re/Arte, Padilla says, “I’ve been getting a lot of support from professors and teachers, famous artists and poets/writers from the area. It’s been good. It makes me think that well, I might eventually outgrow this space and I might have to move to a different location ‘cause there’s something bigger and there may be more possibilities in a bigger space. I’m hoping that’s how the space grows.” On a more personal note, she shares that the opening of Re/Arte makes her feel, “Euphoria and fulfillment with a tinge of reality, like we’re in a lease now, but it’s not ruined by the fact that I feel so at peace with this new feat / chapter.”

For more info on Re/Arte Centro Literario and to view their calendar of upcoming events:

To donate to Dryland and Re/Arte: 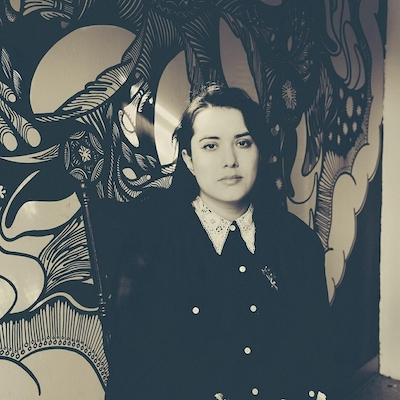 Viva Padilla is a poet and the founding editor of Dryland, an independent print literary journal founded in South Central Los Angeles and of Hombre Lobo. She is a first-generation Chicana, a daughter of immigrants who crossed the border from Colima, Mexico. She is currently working on a bilingual poetry collection. To learn more about Viva Padilla and her work visit: https://vivapadilla.com/home

1
Tags:
Previous Article
My Choice #1
Next Article
Never a Failure, Always a Lesson