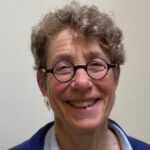 Writing that’s lyrical and emotionally evocative grabs my attention. I also like writing that’s accessible and yet inspires me to learn something new. This poem does it all, while painting a brilliant picture of the SkyStar Observation Wheel, a new-to-me visual marvel which set me to Googling, in part to verify the number of lights. From the poem, those million lights blinking at night, and the tiara sparkling with sunlit dew each morning—these images stay with me. I see “Mourning Jewelry” as a lovely elegy; in fact, one could say it’s a gem (no pun intended). And I also admire how the poem shifts at about mid-point from one tribute to another, telescoping from the masses to spotlighting one person—quite a singular individual, in fact—and then imagines what that person might have said about this mourning.

brought in to celebrate a century and a half
of Golden Gate Park and paused
in place for seven months, skeletal and still,

the party postponed for the global pandemic,
then opened to riders, its climate-controlled
compartments disinfected between rides,

feeding people starved for joy a new view
of the city and their lives, then closed again
when cases rose again, the virus like a Ferris wheel,
case counts rising, falling, rising, giving us

a new view of our lives, of our city, of how much
we want, how much we need, how we might care,
how lonely we can get for touch, how wrong the world

can be, and of the light in eyes above our masks.
Even closed to passengers, the wheel’s
one million lights stay on till ten,

nightly changing colors blinking
along its circumference and spokes,
and in the morning, just the light

of the world shining on each car’s roof,
the cold night’s condensation reflecting
the sunlight, dressing the park in a tiara.

At noon the Stars and Stripes hang flat
against their backdrop of cypress trees, too low
at half-staff to touch the sky as blue
as the eyes of the poet Ferlinghetti,

poet of that saturated sky, brilliant with the wild dance
of the scattering short blue waves of light, poet
of that park with its redwoods and palm trees,
its bison and visiting SkyStar Observation Wheel,

poet who has died the night before, a month away
from turning 102, of interstitial lung disease, no more poems
resounding from the winding alleyways of his life.
It isn’t Ferlinghetti the flag is lowered to half-staff for

after being hoisted to its peak for an instant as the Flag Code
prescribes, but in memory of and mourning for
500,000 Americans killed by the virus,

the population of Atlanta or of most of the state
of Wyoming or more than all of Iceland, 500 candles
lit at the White House, one for each thousand,

perhaps within the hour of Ferlinghetti’s dying
followed by the proclamation that the flag
will hang all week at half-staff.

for the front-line cooks, the farmworkers
and meatpackers, delivery drivers and nurses,
along with the unpublished poets and those
with poems yet to be written.

He might have said at least until this dying ends,
let the flags all pause on their brisk ascent
and spend some time at half-staff

on their ceremonious way down
like bowed heads in a moment of silence.
Let the city keep on mourning for a while

and with that SkyStar Observation Wheel
let the city wear its jewels to the funeral.

Rebekah Wolman is a recently retired educator living in San Francisco and returning to poetry from a long detour. Her poems have appeared in Essential Love, an anthology of poems about parents and children, and in The New Verse News and Limp Wrist.