The speaker in Scott Laudati’s new-to-many collection Hawaiian Shirts in the Electric Chair REDUX is a young man facing the normal problems of his age group—disappointments in love, career issues, and worries about America, its people, and the environment. The book is a republishing of Laudati’s first poetry collection Hawaiian Shirts in the Electric Chair (2014), which has gone out of print (hence, the word redux, signifying “revived” or “brought back”). For this REDUX version of the collection, he edited a number of the original poems and added ten new ones; so, to an extent, this is a brand-new book. The result is a no-holds-barred collection of engaging, “real,” and sometimes humorous poems in which a young poet goes out into the world, confronting what it means to be an adult. 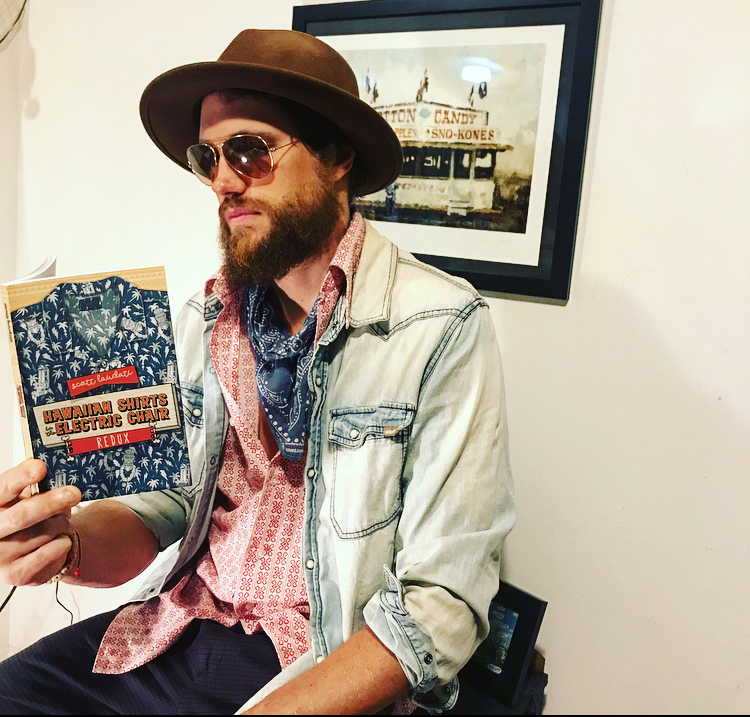 Scott Laudati and his new book, Hawaiian Shirt in the Electric Chair REDUX

One of the first things the young poet finds out about the world is that “[it] didn’t want a new poet / but there’s always room for another plumber” (“what are you good at” 146).

He also witnesses a tragic death: a family member perishes from an overdose, which leads the speaker to seek out and confront the drug dealer, who “didn’t fight back, / he just cried” (“give a lozenge to the voice of the archangel” 131).

And in “turnpike blues,” Laudati cleverly links neckties, air pollution, and the state of New Jersey all in one poem. He writes:

the [New Jersey] air stunk like a chemically enhanced napalm fart.
then i looked down at my necktie,
i was a manufactured monkey like everyone else.

Overall, his take on life as an adult is grim:

be a good boy
lie cheat steal
but above all
die
like an american.

Some of the most interesting poems in Hawaiian Shirts in the Electric Chair REDUX center around the protagonist’s poignant and sometimes hilariously noir attempts to develop adult relationships with various women:

i left
and
i didn’t think much
of what
her life
would be like
without me
because
i never thought
much
of myself.

The young poet’s love life is complicated. Convinced that he isn’t very attractive, he expects rejection, sabotaging himself. He writes in a poem addressed “to the girl i went out with last night”:

i’ll
love you
like only a man
who never gets the girl
can.

In another poem about a woman, the speaker starts by offending her on the first date because he erroneously assumes that a person as cool as she is would naturally want a gift of cocaine. Turns out, no, she doesn’t. To make up for his faux pas, he tries to dream up another present to give her to make her fall for him. He briefly considers snatching a puppy from the local dog park and giving it to her. In the end, he pleases her by bringing her a book by Sylvia Plath (“take the path for cocaine and plath” 47).

In some ways, these poems tell a story that has a happy ending. Several poems in the collection are written as if the young man has finally found a mate he can be happy with, someone who helps him “escape the firing squad of [his] mind” (“a girl from greenwich village” 46). Being with her, [he is] “for the first time / happy [he is] here instead of anywhere else” (“2 a.m. or dawn” 139). In another poem, the he tells his lover:

[i] wonder
if this life
actually
existed before
you got here

And in view of the speaker’s bad luck with women in the past, his finally finding the right person seems to fill him with an optimism and a joi de vivre that make their way into the poems.

Stylistically, Scott Laudati is a skilled observer, good at composing “raw,” quirky observations, such as “i forgot for a while that people are inherently bad” (“2 a.m. or dawn” 140) and these lines:

This language—in a poem about a date who greeted him by regurgitating her stomach contents onto her desk—also struck me:

sometimes
all it takes is a public vomiting
to prove
that you are still free.

Overall, this is a poetry collection well worth delving into. New-York based Laudati is now an established poet with three more books under his belt. His achievements include three Pushcart nominations. He also was a runner up for Cultural Weekly’s Jack Grapes Prize in 2018. He has a much larger audience than he did when Hawaiian Shirts in the Electric Chair first came out. These poems, as revived and revised, deserve a wider readership.

Readers are likely to find that Hawaiian Shirts in the Electric Chair REDUX by Scott Laudati amuses them, makes them think, and touches their hearts. Above all, these poems enable us to feel what it means to be a young poet who’s grappling with the world for the first time. And that’s a better magic youth serum than anything Ponce de León ever dreamed of.

Buy Hawaiian Shirt in the Electric Chair by Scott Laudati.

A cool video of Scott Laudati.