Review: Rich Ferguson’s Everything Is Radiant Between the Hates

When I first read Rich Ferguson’s Everything Is Radiant Between the Hates, I thought he was only cataloguing what makes life chaotic and difficult. However, it became clear fairly quickly that while he is often discussing the toxic, the painful, and the frightening, where he is best is when he is providing ways through the problematic and that his collection is one of power and courage, one that affirms that what is good in us and in our perspective is a force for pushing through what might well otherwise overwhelm us. There is a lot of pain and chaos to work through from the fall out of the Trump years, to racism, to the pandemic, and Ferguson discusses all of that and more, but I truly love this book for the hope that as the title suggests it radiates. The work here is powerful and realistic and part of this realism is the way that he batters against the idea of hopelessness.

Of course, part of this realism is that the world seems to be more full of pain and confusion than any time many of us can remember, and Ferguson does a good job of highlighting all that is painful in this new world. In “One with the World, One with Yourself,” Ferguson describes much of what we face. He writes that we should be one with “these terrorist times,” “the inherent and self-annihilating dirge / of burn, baby, burn,” “climate changing,” (40)  and many other problems in a poem that runs for five pages.  In “Another Day in L.A.,” he writes about the difficulty of life in Los Angeles:

It’s not just that many of these things are so painful, but that there is so much of this in the world, and his litany of travails pile up like a negative Whitman list. The problem is that it is all true. This is part of what it means to live in Southern California and the world. He reserves an entire section, “The Autopsy of Democracy,” for what Trump brought to us. In “Please Listen Carefully to the Full Menu as Our World Options Have Changed,” he lists as in a phone tree for the White House under Trump:

It would be easy enough to be overwhelmed by what Ferguson is writing here, and I know that I have been at times; what he is providing for us is a way to not be overwhelmed by this. So much of his courage is summed up in one quick stanza of “Soundtrack to a Modern-Day L.A. Palm Noir,” where he quotes a voice in our head,

This is where this collection comes to life. It is strength in the face of grinding endless, everyday evil. In “Pulse,” he writes,

Quick, turn to the person next to you.
Place two fingers upon their wrist.
Feel the pulse of blood.
Remind yourself you’re still alive. (73)

Probably, the place he finds the greatest source of courage and hope is with his daughter, whom he writes about extensively toward the end of the collection. She offers him and us a way through the dark thoughts and realities that threaten to end us. “In Praise of Beastless Beds,” he writes, “I search beneath your bed / to ensure there are no monsters / bearing the odor of heartbreak” (145). If nothing else, giving him something to fight for and protect gives him strength and courage, but of course his love for his daughter is larger than this. He is expressing a kind of Viktor Frankl approach to life, finding something that is bigger than himself, something he can focus his love on to create hope.

Rich Ferguson’s Everything Is Radiant Between the Hates is a collection that is perhaps a literary successor to Fante and Bukowski in a lot of ways, but it is something more than that as well. It is powerful and rich with the kind of images and ideas that keep me going. 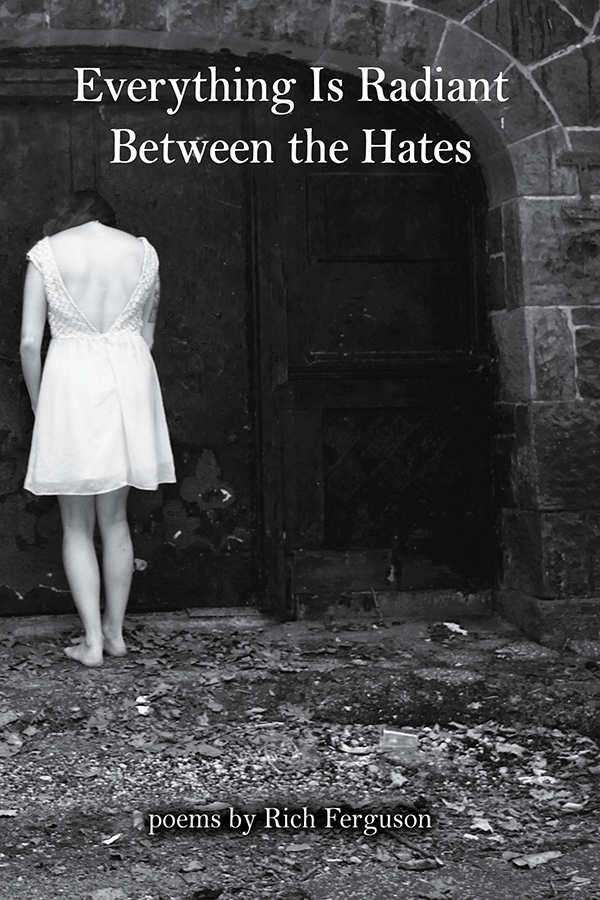 Book cover – Everything Is Radiant Between the Hates by Rich Ferguson

To buy the book from the publisher

To buy the book from Amazon