Sean Thomas Dougherty: “In the Room Next Door How Many People Have Died” 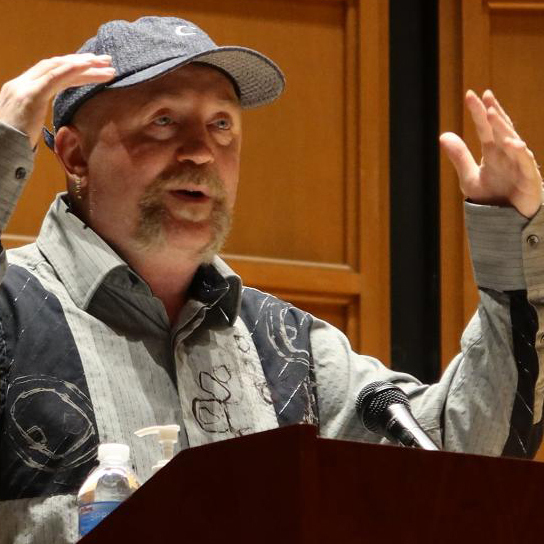 Sean Thomas Dougherty, “In the Room Next Door How Many People Have Died,” 2021 Jack Grapes Poetry Prize Winner selected by Judge Mariano Zaro

This poem travels from specific anecdotes (“the old teacher with dementia”, “a white woman/named Eliza who snored/so loud I could hear her down the hall”) to the brutal territory of racism and social injustice. With a language direct and unadorned, the reader is confronted by the weight of the past.

In the Room Next Door How Many People Have Died

I think often of that white man
who ate it seems nonstop
when you were NPO, the one who called
out for his mother.
Or the old teacher with dementia
who chastised her imaginary students.
Or the pool player Hank I knew
who played a miniature game
on his bed tray with wadded up paper
& straws, I said see you tomorrow
& next day he died in surgery.
I took care of a white woman
named Eliza who snored
so loud I could hear her down the hall.
Sometimes someone can snore
& have their oxygen level drop
toward dead, as if drowning
in their sleep. I witnessed
my Haitian friend Garry drown
when I was seventeen.
We thought he was waving not drowning,
then down he went, twenty feet in a quarry.
After he was pulled up & CPR’d
his heart would not start.
The police & paramedics stood around
telling raunchy jokes,
casual as if it were a picnic.
He lay dead on the dock
with his mouth open,
like a carp caught on a hook
or this picture I saw in a book
of a Black man lynched,
his mouth open & slack.
The white women
standing for the photo in a line
smiling in their big, flowered hats.
The grinning white men,
the white children laughing at the camera
as a nameless corpse
dangled above their heads.
So many decades ago, those children
in the photo are all dead.
I wonder if they died old
& happy, if they married,
if I live beside their grandchildren?
I wonder if they have that photo
in their scrap books.

Sean Thomas Dougherty is the author of the forthcoming The Dead are Everywhere Telling Us Things, winner of the 2021 Jacar Press Poetry Prize. His book The Second O of Sorrow (BOA Editions 2018) received both the Paterson Poetry Prize, and the Housatonic Book Award from Western Connecticut State University. He works as a Med Tech and caregiver for people recovering from traumatic brain injuries in Erie, Pennsylvania. More info on Sean can be found at seanthomasdoughertypoet.com.

Tags:
Previous Article
The Best Movies for Halloween (That You’ve Probably Never Seen)
Next Article
Lessons to be Learned #3 – The Challenges and Wonder of Childhood