I went into watching the Hulu movie Shirley with an open mind. I love Shirley Jackson, her short stories, her novels, her essays on raising her four kids in small town Vermont with a 1950s style husband. I enjoyed the biography of her. I knew this film was based on a novel that was a fantastical take on some scant details from her life, but I was ready for the journey.

I have long been a fan of art across mediums, meaning, the movie will be different from the book, but it will be its own animal, so I’m happy to settle down and watch an adaptation of an adored book, or to learn a different artists’ angle on a famous writer’s life. Capote was telling its own story, and it was mesmerizing to me despite the fact that it didn’t entirely line up with the biographies I’ve read of Truman Capote. Art is art. 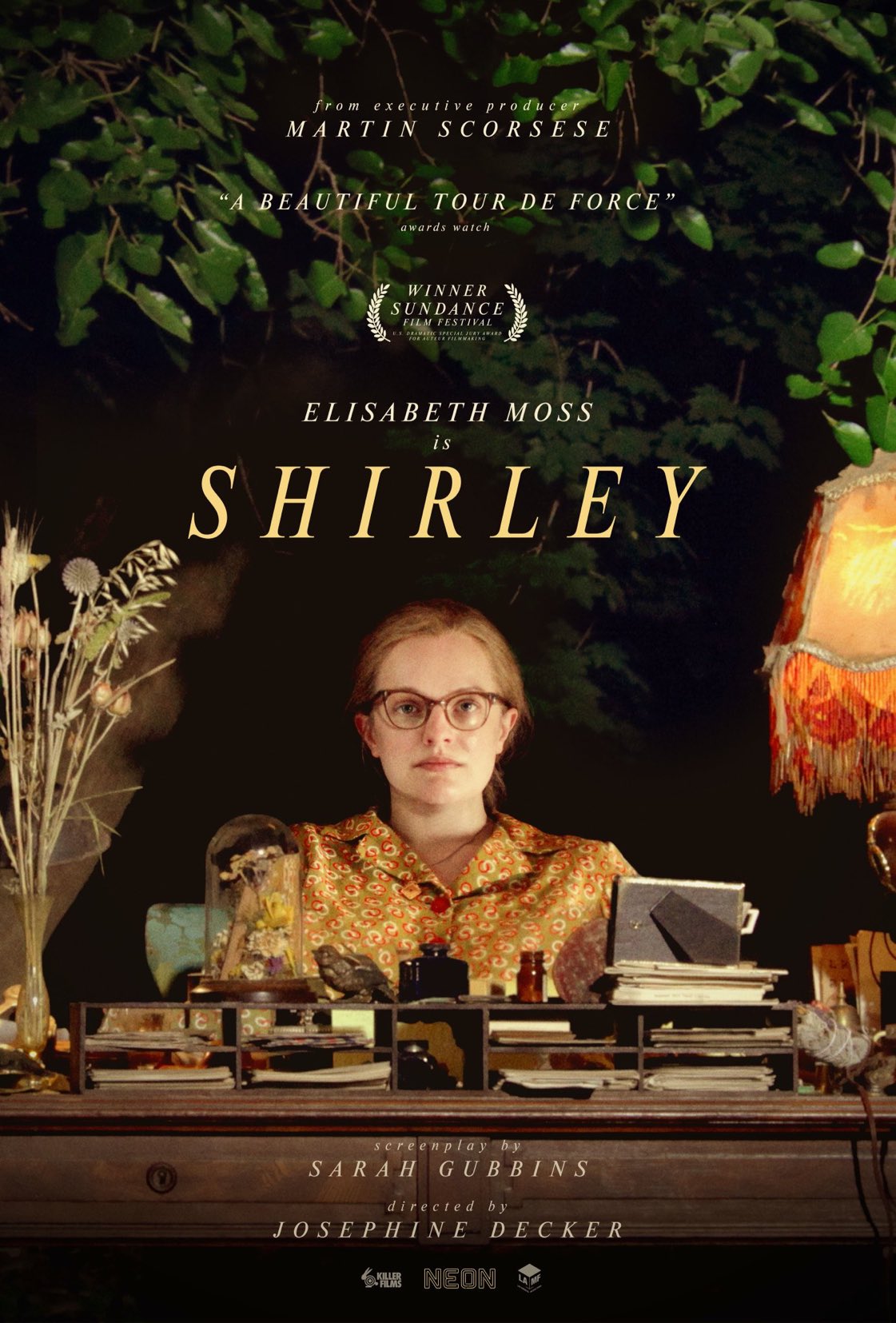 I adore Elizabeth Moss, but the moment I saw her portrayal of Jackson in early scenes I knew we were in for trouble. Within a few frames, I saw that we were stepping into the tired, “only crazy women write dark fiction” trope. To put it more plainly, the idea that, “only a sick person could write a story that disturbed me so.”

Shirley Jackson comes to public memory for The Haunting of Hill House, which is another artistic departure from a book, but its own really intriguing series that I’ve watched twice. She’s also immediately known for her disturbing short story “The Lottery” which many of you reading this were made to read in school: small town, a lottery where one townsperson is chosen to be sacrificed each year. There are stones involved. Sound familiar?

Shirley opens with a young Rose Nemser visiting Bennington with her assistant professor husband; she is reading Jackson’s “The Lottery” in the New Yorker. She is blown away (as she should be) by the story’s clean writing and absolutely subversive creepiness. We then meet Jackson who drinks too much, won’t get out of bed and is prone to jealous rages or skewering rampages on unsuspecting faculty wives who are hitting on(or actually sleeping with) her philandering, but charming long suffering husband Hyman. Shirley is high strung and terrible at housework and needs an assistant. Apparently, she can’t write without hand holding support. She is living evidence of the rare, high strung, crazy flower that must be the only type of woman who could compose spooky literature. Rose tries to fit in as Shirley chases a local story of a murdered woman into a book.

As a writer of dark fiction, I found the character of Shirley’s methodology for writing hilarious, as she drinks and smokes heavily, lolls around the house in her slip and scribbles madly in a notebook. Rose finds Shirley lying on the floor of the living room in a daze. This dark fiction apparently makes women completely crazed and distant and wander in the woods, feral and rambling to the beleaguered Rose about deathcap mushrooms. By this trope, my first horror novel HARROWGATE about a family haunting should have had me rolling around New York apartments, riding up and down in spooky elevators, and picking furtively at curtains and muttering into the dark. And of course, smoking and drinking. Hate to break it to you, I sat at the dining room table when the kids were at school for two or three hours most weekday mornings. In the afternoon I worked my other jobs. I ate regular meals. And when my kids were home, I spoke like a regular person and continued on with my regular day. Writing comes from the imagination and hard work, not from madness. Read any article on literary lions (that term only seems applied to men writing) and you will come across writing routines, long walks, and often day jobs. Images of male writers on film involve comfy sweaters, book lined rooms, that cigar and champagne ritual (Misery). In real life, when male writers are asked interview questions, they are about the craft of the book, and the idea behind the story. They are rarely asked about their families. You never hear people questioning Peter Straub or Stephen King’s parenting skills (both great dads from all reports, but the dad part rarely comes up in an article).

My mom, Kit Reed, was a writer of dark fiction whose work has often been compared to Jackson’s. She wrote weekdays from 9-12, worked in the afternoons, and during the parts of the day she was with her three kids and husband, it wasn’t about her. It was about us all together. I didn’t even know the kind of stuff she wrote until I took an interest in my teenage years. But my entire life, I’d get cornered at a party, or an event, or at school, and people would say, “What’s she really like?” or, “Your mom writes such weird stuff, what’s it like to have her as a mom?” There was this expectation, that a woman who wrote dark, fucked up fiction had to be dark and somehow fucked up. There’s this pearl clutching, but what about the children? Mentality that was so bad in the mid sixties my mom had an article written about her second book headlined, “Housewife Expects Second Book” and devotes time answering questions about the whereabouts of her husband and children and how she manages to get that writing in while still serving them. The book itself is hardly touched on. 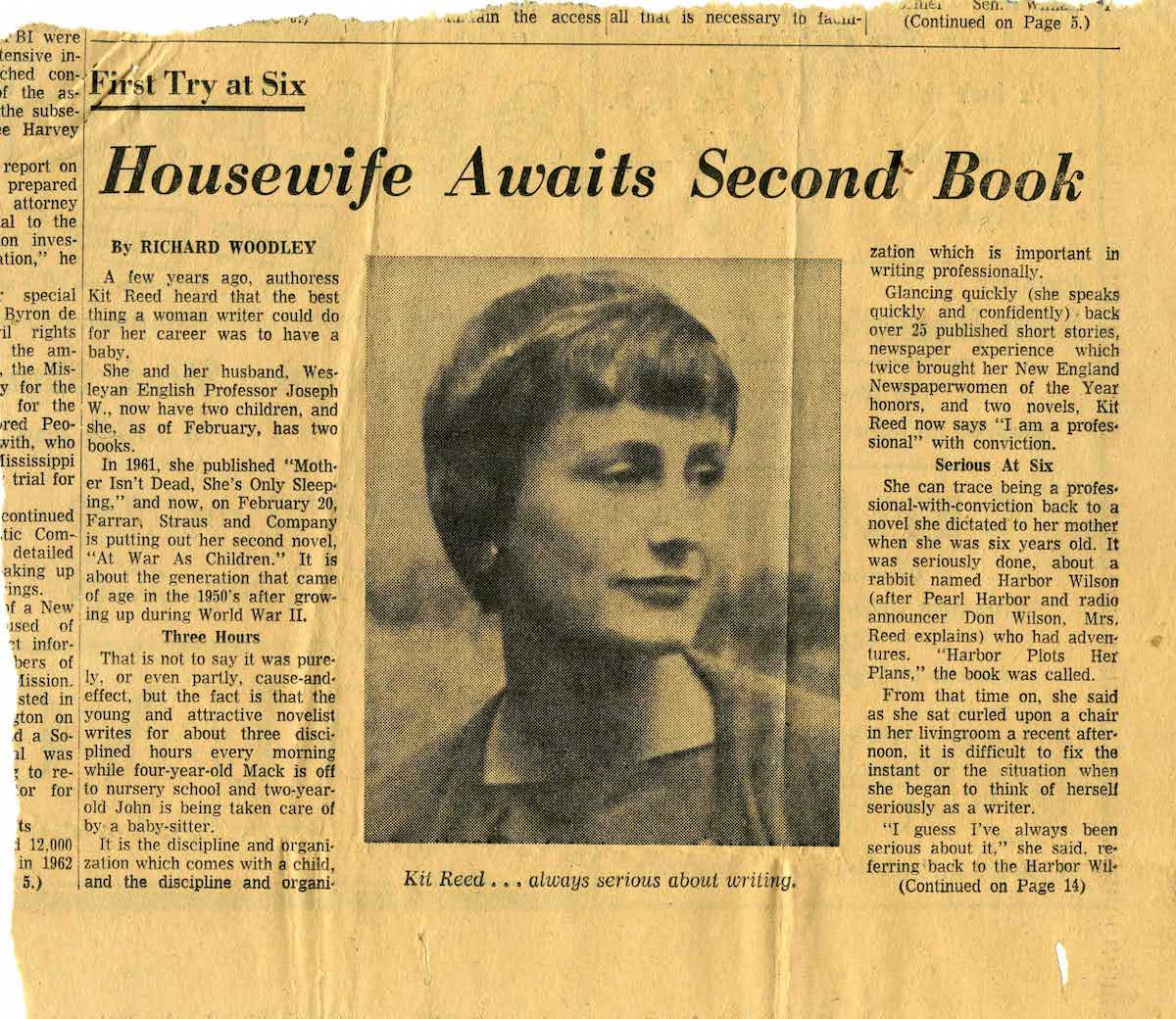 I have not read the book by Susan Scarf Merrell that the movie Shirley is based on, but I can see that its structure is solid, the writer is setting up a relationship between Rose and Shirley at the heart of the thriller. Their odd relationship gets creepy and changes Rose’s perceptions of life, making her rethink her role as faculty wife. I understand Merrell had to make her own book creepy, but so much is lost in the process of the telling, that it was frustrating and saddening to watch.

When we talk about representation mattering, taking a beloved literary figure with a solid and normal life and making her into a batshit mushroom picking wraith, it is not only reductive of this phenomenal and important American writer, it lends credence to ideas that make it harder for women writers to move in the world. Jackson should be as lauded and revered as Capote, as Hemingway, as any “great American Writer of the 20th century.

The movie ignores the four children Hyman and Shirley shared together and their wholesome upbringing, it ignores the fact that Shirley took care of all the housework (yes sometimes with help) and kept the kids’ out of her husband’s hair. From her telling of the kids’ lives collected from her articles for Housekeeping and Mademoiselle in Life Among The Savages, she spent more time really involved in their concerns and their imaginative play than most mothers of the fifties(or dare I say than mothers of the seventies). She seems to have a handle on the very different characters and voices of each of her children. Yes, she drank, yes, she smoked and that is evidenced even in these delightful articles, but there is no sense that her family was neglected. Despite all of this work, she managed to write, and write beautifully. I’m guessing she did this at a desk or table, not writhing in the woods or on the floor. Her short stories and these very pieces about her family often kept her family afloat monetarily. Most notably, she never mentions her writing in these articles. Because, unlike the picture of her wandering the house and lying on the floor, forsaking life itself to write, she kept her writing life separate from her kids and managed to raise them just fine while creating an enormous body of work. Her kids are passionate about protecting her estate, I can only imagine how heartbreaking this image of their very real and involved mom must have had on them.

Women who write often have boring lives, just as men who write. And there are likely fucked up writers of both sexes with wild lives. But until people stop focusing on how WEIRD women must be to write, or criticizing them for writing sexuality because outside of their writing life they happen to be raising children, until interviews become about the work, as they are for male writers, we are always going to be stuck in the woods.