Signs and the City

What do signs do in the city?

Signs in the city are graphic elements, verbal and non-verbal, usually applied to buildings, whose function is to designate places open to the public, be they for commercial, professional, recreational or institutional activities.

Their format is usually left to the creativity of designers for visual distinction, ease of recognition and readability, and for the evocation of socio-cultural association.

When these associations reach a high degree of familiarity over time these signs can be assigned patrimonial value and will be preserved as identity markers of a city scape and its skyline.

The feature drawing is a case in point of such associations.

Although it designates a seafood commerce, located in the well-known public market of Montreal’s Little Italy, its chosen name evokes the original “Shamrock Lacrosse Grounds” the market occupies.

The following images illustrate a variety of associational themes. Since these signs have been recognized by the city of Montreal as having patrimonial value, their presentation in thematic pairs will be comparatively commented in terms of their physical and visual characteristics, and socio-cultural associations. 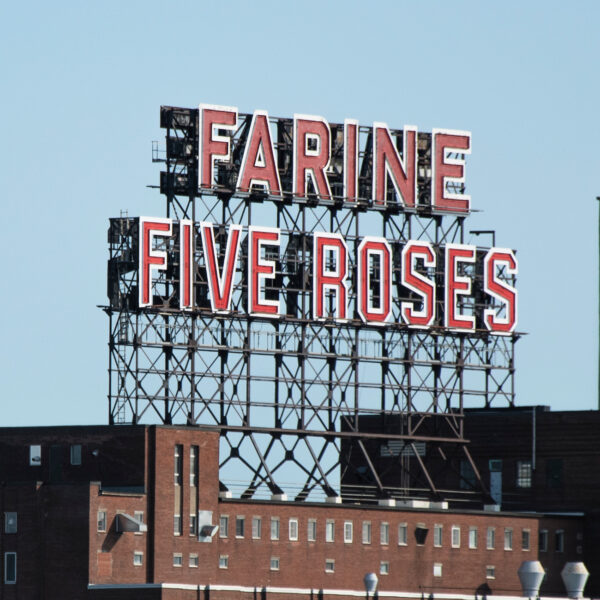 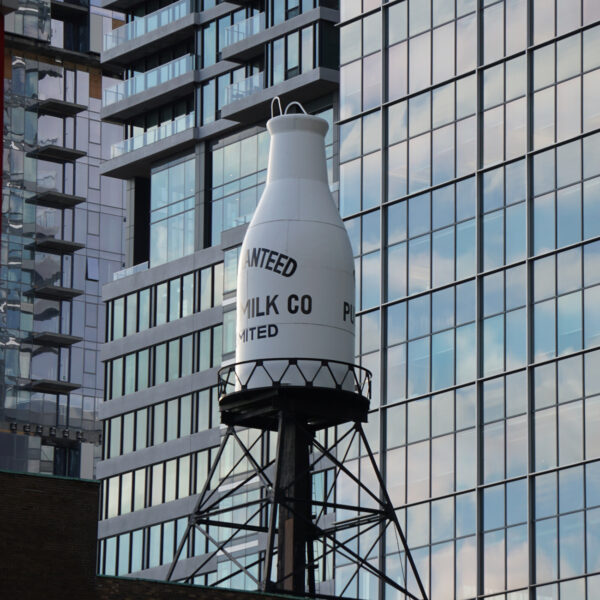 Whereas the flour mill sign, benefits from a low built environment around it that insures its strategic visibility from far inland and from the river, the milk product one was located further inland, in an area that sprouted high rise buildings next to it, reducing its visibility.

Whereas the mild bottle sign uses English language only, the flour mill sign uses both English and French in a politically-correct gesture.

Since both original outfits are no longer operating under the signs, these have become something of iconic remains of the city’s industrial skyline to be maintained for their sentimental value and their contribution to Montreal’s cityscape and skyline identity. 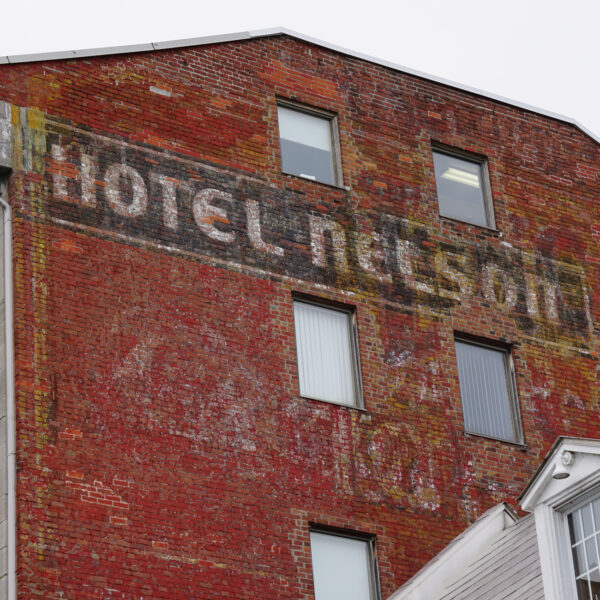 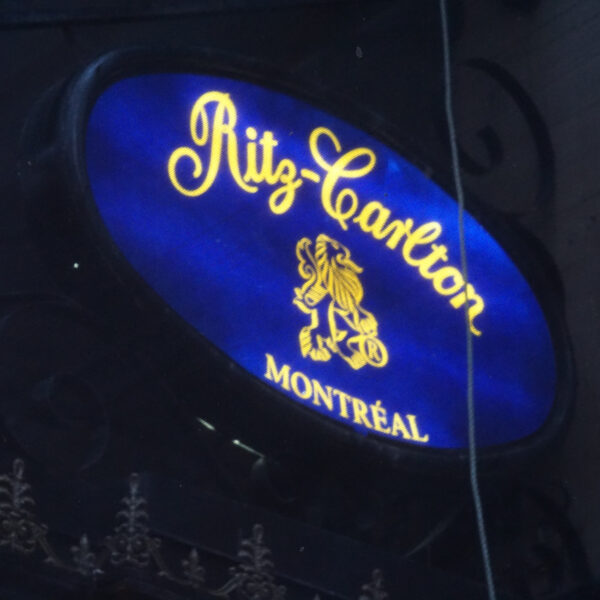 Hotel Nelson is located on Place Jacques Cartier with its monument to Admiral Nelson from which it draws its name, whereas the Ritz Carlton, with its interior courtyard and five o’clock high tea, is the heart of Montreal’s new business and cultural downtown.

While both hotels are over a century old and are part of Montreal’s architectural patrimony, their signs are as different as a stenciled name on a weathered brick wall can be to an engraved name and hotel crest on illuminated colored glass jewel-like sign protected by a generous canopy. 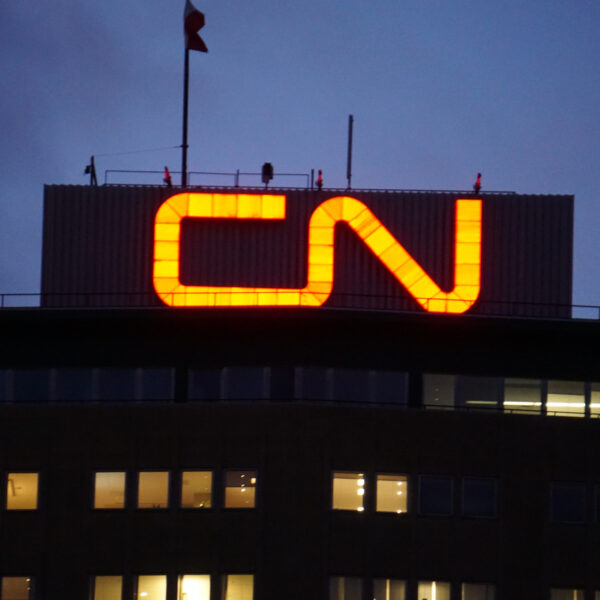 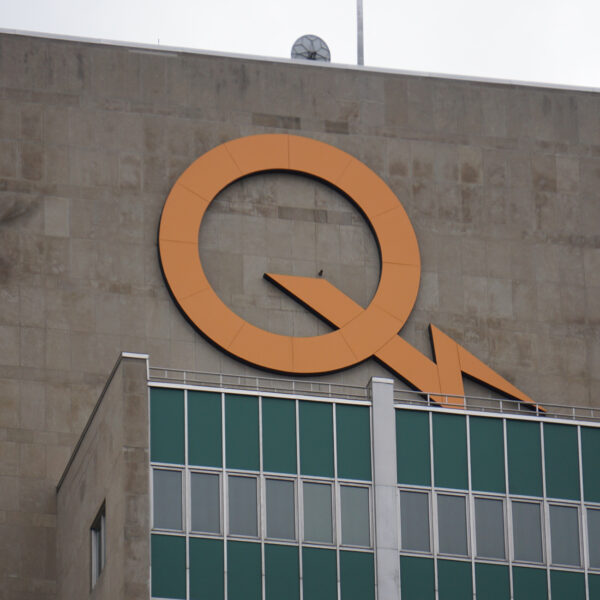 The two solitudes are of course the two Canadian linguistic-territories of French-speaking Quebec and English-speaking Rest of Canada.

While the CN logo continuous linearity evokes the role of Canadian National railroad in uniting Canada, the Q’s lightning tail evokes, in no uncertain way, the economic giant of Hydro Quebec.

Curiously both huge towering signs are lit up at night thanks to Hydro Quebec provided power … probably symbolic of their interdependence! 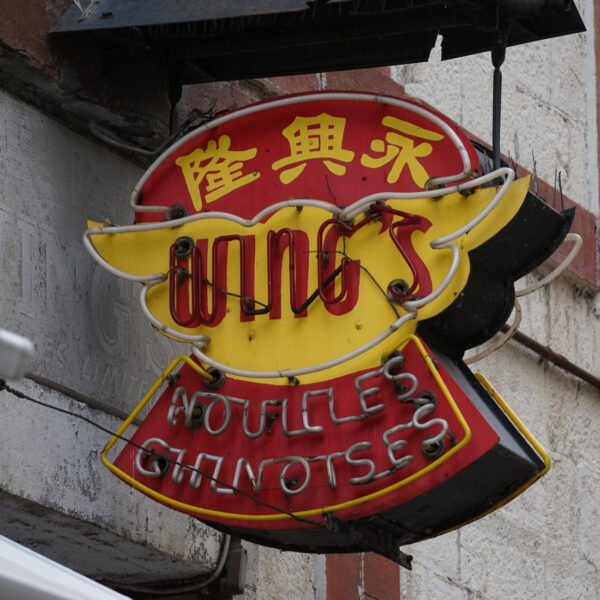 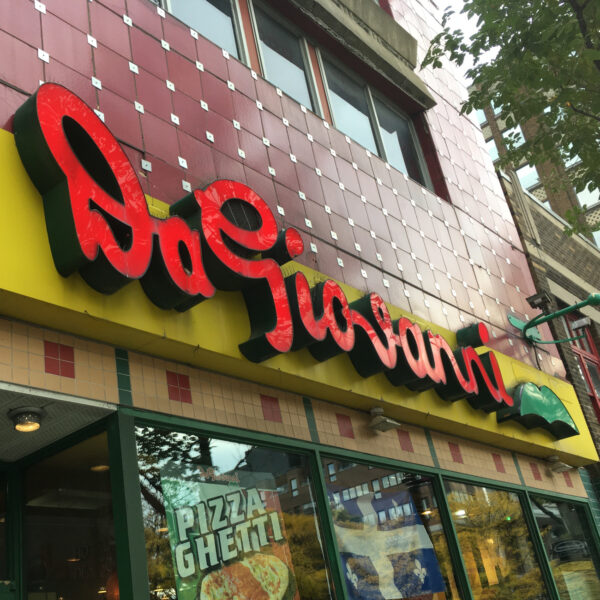 Da Giovanni, Italian restaurant at the cesure between French and English districts of Montreal

Associated with the immigration waves of early to mid 20th century the Wing’s Chinese restaurant various locations gravitated in and around Montreal’s Chinatown while Da Giovanni elected to locate downtown at the crossing of the main north-south and east-west commercial drags.

The similarity of red-yellow color scheme issued from their national flags is their only resemblance while size and the use of three languages French-Chinese-English in one vs. Italian only in the other speak of their culturally conditioned public discretion for one vs. near operatic bombast for the other. 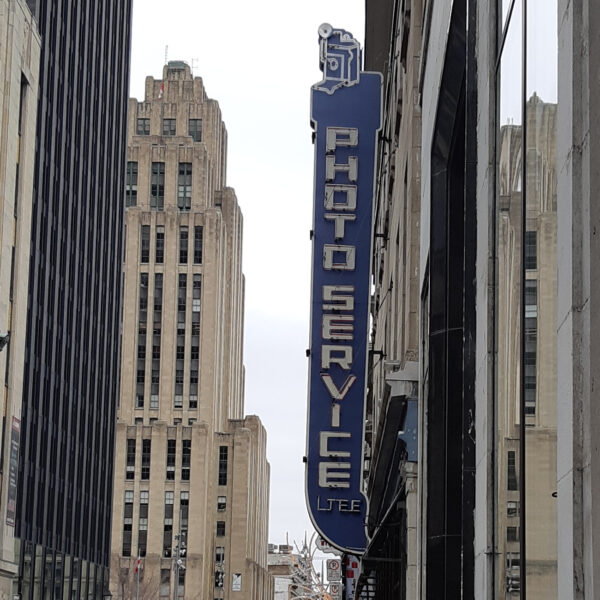 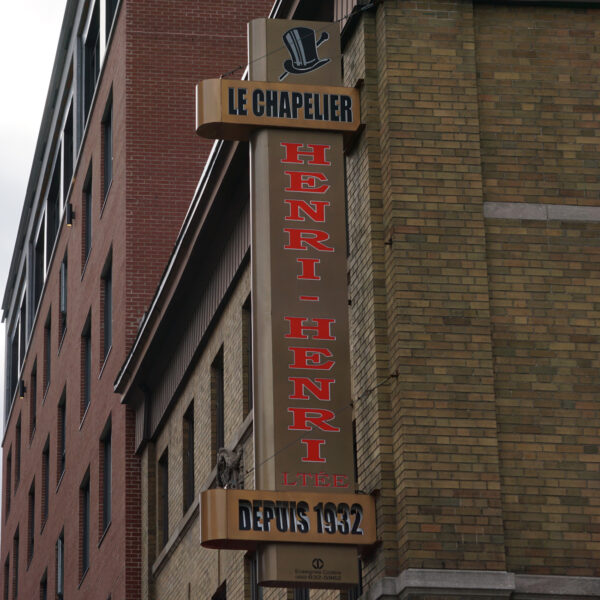 Graflex camera and top hat situate these two signs familiar to any Montrealer in search of a camera and photographic advice, or of a season and circumstance appropriate head dress.

Their historical perennity is due to their unique vertically hung format, neon-lit visibility and localisation: in the city’s original newspaper district for one, and on the city’s commercial and cultural main street for the other… and to the fact that both businesses are still active.

A wise person mentioned once to me that the best way to deal with the solitude of aging alone is to dress up daily, to go out for a walk of at least half an hour, to meet and talk to at least three persons and, if possible, to make them laugh!

I have no problem with the first two items but home sheltering and social distancing, courtesy of Covid19, have so far not made it easy to fulfil the last two items.

This is where signs, as the ones discussed here, come in handy since they do provide pause for examination and, sometimes, cause for a smirk.

Do they replace interaction with people?

I doubt it, that is why I have elected to examine signs that have gained patrimonial status and discuss them, rather than the local, more likely home-made ones.

This patrimonial value, essentially based on the visual establishing of the historical presence of ethnic groups, social classes, professions, etc. reminds one, if ever necessary, that “the city is the people”.

The feature drawing to Maurice Amiel

The photos of the signs were taken from the following web site:

The reference to the “The two solitudes” was inspired by Hugh MacLennan 1945 book of the same title.

Tags:
Previous Article
Is This the Darkest Before the Dawn Part?
Next Article
Poets on Craft: Stephen Kampa and Chelsea Woodward