The Astonishing Heidi Seaborn: A Review of An Insomniac’s Slumber Party with Marilyn Monroe, Winner of the 2021 [PANK] Poetry Contest

Heidi Seaborn has an amazing, not to mention enviable, writer’s story. Her coming-of-age as a poet was a destination she landed only a few years ago without an apparent wobble. After decades of working as an entrepreneur and marketing executive, she obtained an MFA at New York University and is now is the executive editor of a high-visibility poetry journal and on the board of another. Her poems find homes in desirable journals. She has published five collections of her poetry, accumulating three book awards along the way. 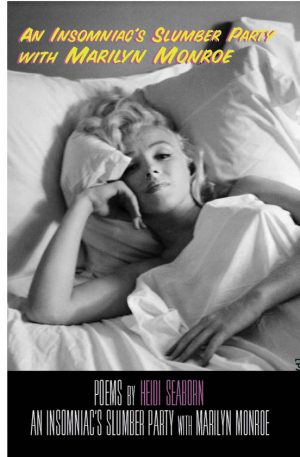 Quite an incredible feat to have accomplished so much in five years. I know Heidi. I envy Heidi. But what looks like easy success is probably more a combination of obsessions, the drive to match them, and long-percolating talent. And the truth is up-close Heidi is delightful and unpretentious. We both live in the Pacific Northwest and see each other at poetry events. But I didn’t feel like I knew her until I read her work.

I’d planned to review her recently published, award-winning book, An Insomniac’s Slumber Party with Marilyn Monroe but I decided to first peruse her other publications: Once a Diva (2021), Give a Girl Chaos (2019) and Bite Marks, which won the 2020 Comstock Review Chapbook Prize. Although I’ve heard Heidi talk about how and why she wrote about Marilyn Monroe (it was her MFA thesis project; she set out to write persona poetry as a challenge; she chose an icon that she, at the time, knew little about; she researched the book zealously), but as a reader, it was difficult for me to entirely parse the connection between Monroe and Seaborn without some additional ballast.

Now, I have to admit the book is pretty fabulous without this sort of exploration, but it seemed to me that the act of parallel digging would appeal to a poet, possible even to the book’s author. Where Seaborn had to research her subject painstakingly in order to write Monroe; I had to learn what I could about Seaborn, in order to find my way into this book. In other words, in order to listen to the ghost of Marilyn Monroe, I needed to read the poetry of Heidi Seaborn.

The chapbook, Once a Diva, which I saw only as a draft a few years ago, was totally unlike, but certainly foreshadowed, An Insomniac’s Slumber Party with Marilyn Monroe. In the poem, “The Poet Diva,” the narrator explores her writing self and displays the sort of confidence that many of us lack. Or maybe we are naïvely confident until we don’t succeed, and then lose that stance in the throes of rejections. In any event, in this poem, we see the emergence of the butterfly from the cocoon:

The Diva does nothing half way:

soon she’s published a poem,
a dozen, then surprise, a book.

The Diva’s not surprised.
She expected as much.

That is one possible view of the diva’s story. She expected as much. But “Me Too Diva” presages Seaborn’s stubborn urge to show the underbelly of the diva, here anonymous, but in a waft of Marilyn to come:

Aspiration percolating from her décolletage.
Grit thrusting against her tongue,

that he pressed against his. Snaking
his hand up her spine, neck.

Although I don’t pretend to know Heidi’s story, in Give a Girl Chaos, we are introduced to the visages of a bad marriage, a marriage in which a woman feels subsumed by a man’s “Weather,”

Suppose you wake up to his weather
and find yourself bruised by his weather.

Even in the kitchen, slicing a peach,
weighted air exudes his weather.

I’ve rarely heard a metaphor that rang more true than this. Later in this book, we find hard evidence of secreted trauma, loss, rape and suicide. Perhaps the poet is not revealing her own story as much as her exquisite sensitivity to women’s struggles, hidden between appearances of success. Lines such as “only scars/ like traffic arrows/ across my thin wrists,” or “the doctor said it would/ hurt to pee,” move us closer and closer to Marilyn.

In Bite Marks, we are privy to the scars of maturity, mid-life, hysterectomy, menopause. Here Seaborn refers to a surgeon as “the butcher,” described from the point of view of the female-as-patent:

He skinned me, knife
serrating bite marks along
my spine. From there, it was easy
to peel the last of my beauty.

Again, we find this exacting empathy with a woman’s lifelong experience of being treated as an object. And this portrait is splayed open with the lines, “All the while, everyone/ gushing, you look so good for your age.”

In An Insomniac’s Slumber Party with Marilyn Monroe, Seaborn offers a panoramic view of Marilyn Monroe’s life interspersed with what may be tidbits of herself. Or, perhaps it is better described as a conversation, woman-to-woman, that grew from the depths of the poet’s soulful high energy and lack of sleep in which Ambien plays a supporting role.

The book is a breathtaking tour de force. It is a fairy tale and a murder mystery, a parable and a mirror in which many women will see ourselves. It is a canny story of how success hides violence and pain, how a public icon cannot escape an adoring audience in order to have a medical emergency or a mental breakdown.

What did I learn about Monroe from reading this book? Most prominently, I learned to view her as a woman not so unlike myself—a woman who experienced miscarriages, abortions, infertility, domestic violence, depression—not simply the on-screen success and the successful suicide. I’d assumed Monroe was intelligent, but I was not aware of her vulnerability in relationships or that she wrote poems. I was riveted in a way I did not expect to be in the double negative of Monroe’s story superimposed on the double exposure of the Monroe-Seaborn connection, exemplified in the poem, “1:26 am,”

I crave Ambien & a limey vodka tonic.
It’s the middle of the night & Marilyn’s here

without a lick of makeup in my kitchen,
wrapped in a cream silk robe. Like mine.
So many men & marriages between
the two of us it’s hard to keep track—

I offer her tea. She opts for that vodka, says
Skip the Ambien darling, we have things to discuss.

I must pay homage to the poet’s craft. Throughout all these books, in every poem, we find an exactitude of imagery, electrifying verbs, closely held metaphors, and a narrative that is at times shy, at other times in your face.

It seems to me that reviewing a highly regarded book about a celebrated icon, written by a poet I have some acquaintance with, made me want to know the poet’s story even more than the story of Monroe’s clearly complex life. At some moments this seems unfair, possibly even unkind, to delve for the origins of the writing within the poet’s very real life. And yet, don’t you find yourself wanting to know everything you can find out about artists that you envy? I know I do.

Risa Denenberg lives on the Olympic peninsula in Washington state where she works as a nurse practitioner. She a poet, book reviewer, and essayist; a co-founder of Headmistress Press, publisher of lesbian/bi/trans poets; and curator at The Poetry Café Online, a site where poetry chapbooks are celebrated and reviewed. She has published seven collections of poetry, most recently the full length collection, slight faith (MoonPath Press, 2018) and the chapbook, Posthuman, finalist in the Floating Bridge 2020 chapbook competition.
https:\\thepoetrycafe.online