My first love was discovered through an ordinary, balding man in corduroy who taught math at the worst school in Omaha.

We had a metal detector at one solitary entrance that looked like a plastic prop. Never heard it go off once. I’m imagining now, a hundred years later: Dave Chappelle’s famous white dude impression of our quivering principal, with his sad, sideways tie, installing this fake-ass trap for baddie teens saying, “let’s see those little wise-guys get through me now! Just you try me, buckaroo.” The staff was a teacher’s lounge of slumped over, disaffected, unbuttoned yet unbreakable old women and one young man. I’d passed their teacher’s saloon once or twice when the door was cracked. Instead of cigarette smoke, coffee-scented steam rolled out of their mouths. In place of a defective jukebox was the community TV & VCR combo set. It was said to play only “instructional and educational videos” but I know Kevin Costner’s pale, pancake-butt when I see it, mooning me in the hallway. It was the 90s. And no movie was more dear to my heart than Dances with Wolves.

Teachers either hated me for being sketched-out and visibly poor, or ignored me for the quiet ghosty I was. Sneaking through those lonely corridors that reeked of rubber, teenage boys’ underwear/armpits, finished with lysol— my one wish to Great Spirit was that no one would talk to me, touch me or notice when I hid in the bathroom at lunchtime. I when I got a Dallas Cowboys bomber jacket (!!!) from my Dad’s Christmas Bonus, I prayed to Great Spirit that it would protect me stuffed inside its sparkle-puff of good luck, its awkward embrace.

Mr. Lewis was the math-teacher-of-fate. He actually paid attention to me AND called me by my name. My eyes glistened under fluorescent light, summoned, whenever he spoke a word. There was a feisty look in his unremarkable face, like he had a secret in his pocket protector. He wanted to reveal the utility of math and also its austere beauty (“Look! Math REALLY IS everywhere!”), a passion he might have rolled out for college students, but was dashed to smithereens; effaced at the frontlines of a fourth grade classroom that didn’t give a rat’s ass. I saw the way he rewarded any student, even stevens, for even making the shittiest attempt at turning stuff in or for raising their hand. Even if it was to make a joke at his expense, he’d say something nerdy but sweet like, “OW! You got me!” and pretend to have been shot in the chest.

I started trying to communicate with him through math homework; little drawings and poems on the back of multiplication worksheets. But my silent heart slipped him a folded note on ripped paper that might have said:

A day of skipping school for me and my little brothers would often include smearing mud on our faces for war paint and digging holes outside for each other to fall in. But I found a reason to forego our sworn rebellion against the outside world. I had a cupped love in my hand, more precious than the tadpoles and fireflies we used to keep as pets. The only person I could think of who also seemed to love art was my mother. I was dazzled and so proud to find her sketchbook and her patterned fabrics she would drape over the most mundane to give it a bit of magic. I stole her books, Gone With the Wind, The Catcher In the Rye and tried her Guess jeans and lipstick that were left behind. She always seemed to be quietly climbing out of windows, into the night. But who knows if that really even happened? I have also learned a word for the phenomenon. Confabulation. A memory that might be a mason jar of mixed elements: real flashes of images seen, pain, wishes, dreams. Grass and water. 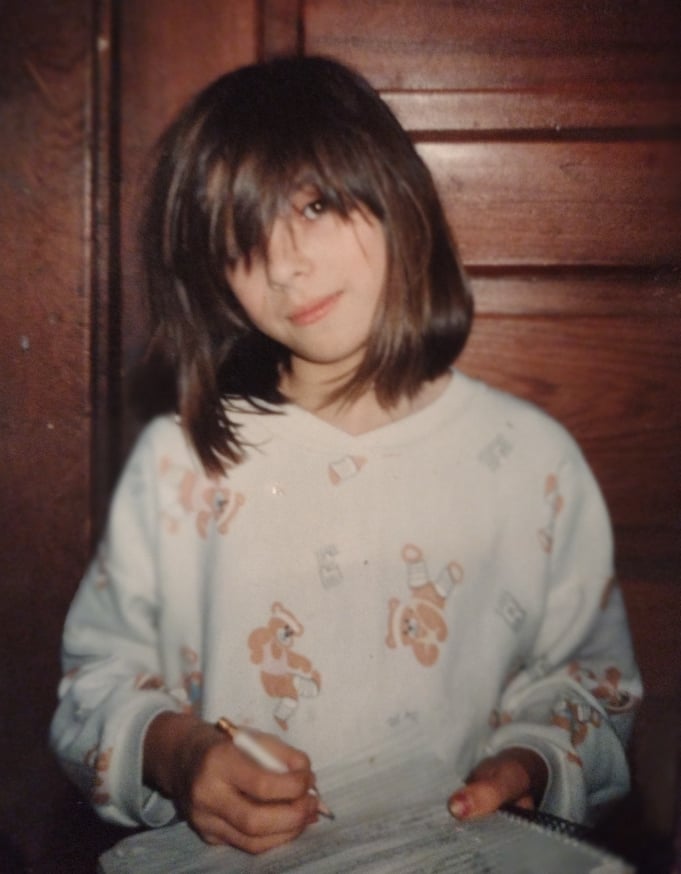 Portrait of the Writer As a Child.

My brothers were dumbfounded when I caught the bus on purpose one morning. I had worked for hours on my poem, sharpening my pencil a dozen times, erasing and blowing on the paper like kindling. On the bus, I had to subdue its brilliant light by smothering it in my pocket with a scarf. When I got to class, I double-stapled the poem to my homework and left it in his box. I sat up a little straighter all day and the next day, but by the third day I started to forget. We all know- the memory of a child is a handful of mist. It became an ordinary week.

The meanest and coolest girl in my grade named herself “Chronic”. All of her friends had sweet names, too. One just had her house address as a name. 246 or something. The youngest and scariest of them all was called, “Lil Breezy”. I really wished I had a name or a number, but you had to be given a name— you couldn’t just give yourself one. Mr. Lewis entered the classroom on Friday with some kind of trolloping pride- a horse at the Kentucky Derby. “I have an announcement!” was all he said and the class filled with shrieks and primitive howls that eventually coalesced into the words: PIZ-ZA PAR-TY, PIZ-ZA PAR-TY, repeated in a rhythmed cult-like monotone. Tiny fists were slammed against tiny wooden desks until the math teacher raised his skinny white finger in the air to silence. “Now listen up! This pertains to all of you! I’d like to announce that I have entered Heather’s poem into a poetry contest for children, and she was selected to represent Walnut Hill! The Writer’s Guild of North Omaha will publish a book of poems, stories and drawings from kids all over town and you could be next!!!!” A corpulent fog of silence rolled over the classroom and my face turned so red my ears hurt. I could not believe that my secret friend, my only friend, the math teacher sold me out. Freaking narc.

Chronic turned around and straddled her chair, “see you after school, mark-ass lil narc” (see even she said it). I sat in my chair for the rest of class, unable to really hear or feel. Some weird voodoo was happening to me. Now I know the word for this feeling. Dissociation. You feel like an abandoned building, but they forgot the cut the power. Sure enough, Chronic and the gals were waiting for me after school. I didn’t even try to run and that confused the hell out of them. I couldn’t hear any of their cool insults. Because I didn’t run and wasn’t at all scared, they were like rez dogs with no car to chase.

They shrunk back into little kids and waddled home.

I took the long way, through my favorite forest/golf course where me and my brothers would steal stray golfballs and sell them back to wandering flocks of luxurious old men.

My Dad was on the couch, illuminated by a glowing screen.

What’s up, Thom? (My middle name is Thomas, so is his. So is his father’s. I am third generation Thomas.)

Nothin’, I said and kicked the ugly carpet.

He was watching MASH. I didn’t bother telling him about my poem or the book or anything else. It was too hoaky sounding. Wimpy. My Dad’s favorite t-shirt says “Don’t Be a Girlyman” with Arnold Schwarzeneggere’s face looking fierce. Who cares about stupid, wimpy poems from a stupid, wimpy girl who talks to trees and pretends to fish in creek with a fucking stick at twelve years old? I felt I had a telekinetic rage + love combo reversing my bloodstream.

We watched a whole episode of the most extraordinarily boring piece of grown-up propaganda I’d ever laid eyes on. Somehow, it was supposed to be funny. Miserable old bastards living in tents, trapped there for eternity, wrapped in wretched colors. Muddy grey-green, black, eggshell.

I’m gonna be a writer, I said, upright and serious as a marble tombstone.

OH? He replied with a distant curiosity that would take at least fifteen more years to arrive.

I swallowed the saliva that had pooled in my mouth. For the first time in my life I felt the torture of ambition, desire. The kind that can only be placed like an obelisk in the Future, that word someday is the most agonizing thing a kid can hear and hold onto.

A couple of years later, I dropped out of school and never went back. I simply walked out of the double-doors and kept walking. I was fifteen.

And when I first left home, I pulled the window shut, lovingly, behind me.

Tags:
Previous Article
Andar Bahar – What Makes It One Of The Popular Games In India?
Next Article
Best Delta-8 THC Products You Must Try