The Top 5 Casino Movies of All Time Worth Re-watching

When it comes to finding a great film to watch, you can guarantee that some of the top movies will be set in a casino. After all, this is a luxurious, high-end backdrop with lots of glitz and glamour. Therefore, it should be no surprise that movie directors often enjoy shooting scenes within the casino setting. Of course, some are just passing through, whereas other films devote their whole storyline to the casino industry. If you’re looking for something new to watch this weekend, here are the five top casino movies of all times, and even if you’ve seen them once before, we thoroughly recommend watching them again.

There is something fascinating about heist movies. Ocean’s 11 was remade in 2001 and starred some serious A-listers, including Brad Pitt, George Clooney, Andy Garcia, Julia Roberts, Matt Roberts and Bernie Mac. It triggered a whole series of oceans movies all centred around casino heists, of course, but this is the first tale of excitement introducing our leading man Danny Ocean (Clooney). This recently paroled prisoner heads straight to Las Vegas (of course, where else would you go) and meets up with some old acquaintances. Between them, they have devised a stunning plan to pull off the most extensive casino heist ever seen by robbing The Mirage, The Bellagio, and The MGM Grand casinos all at the same time. Of course, this is because they are all owned by his arch-nemesis Terry Benedict. The film was nominated for several awards and is a cinema-goer all-time favourite hit. Thankfully, although the movies aren’t showing on the big screen at the moment, they are just as good from home with some snacks and a blanket on the sofa.

No list of casino movies would be worth anything if it didn’t feature the 1995 box office smash casino. This is a Martin Scorsese masterpiece and stars Robert De Nero, who plays the casino owner in Las Vegas. Vegas will be the setting for the most brilliant casino films, thanks to its legendary status in the gambling industry. Blonde bombshell Sharon Stone plays his gorgeous wife, and it also features Joe Pesci as a gangster, so it should come as no surprise that the mob are involved in organised crime. Unlike some movies, this glamorises the potentially seedy world of casinos. Dinero plays Sam ‘Ace’ Rothstein, and his old friend Nicky Santoro comes to visit asking for a bit of assistance. Of course, Santoro, played by Pesci, is an undercover mafia boss and should set the alarm bells ringing. There is a lot of cheating in the casino system, but eventually, the bad guys are brought down with the FBI, corrupt government chiefs and angry mafia bosses at the heart of their eventual capture. 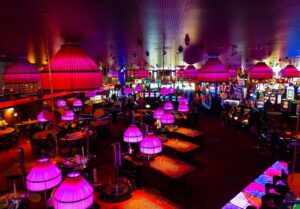 Photo by Michal Dolnik on Unsplash

Casino Royale was first made in 1973 and then remade as another James Bond incarnation in 2006, starring Daniel Craig as our secret agent beefcake. The film centres around a mission where 007 is tasked with bringing down La Chiffre, a worldwide criminal organisation banker. To defeat him, Bond must win a very high stakes game of Texas Hold ’em poker, which is taking place at Le Casino Royale in Montenegro. If they can prevent him from winning, then there is no blood-money for many of the organisations to operate, and the ring of terror would collapse. This second outing of the film shows the money laundering wild of gambling in a very realistic manner. Being a newer cinematic release features better special effects to bring about the high-octane action and violence we all love from our favourite British secret agent.

All that serious casino action can get a little bit exhausting, so how about something much more light-hearted in the form of the 2009 comedy the hangover. They say, ‘What happens in Vegas stays in Vegas’, and this story perfectly sums up why that is such a vital pact to make with your mates if you’re going to have a boozy weekend gambling. Doug is getting married, and he and his three friends Phil, Stu, and Alan, are all off to Las Vegas for what they figure will be the stag party to end all stag parties and be legendary. However, when the stag’s wake up the following day, the groom is inexplicably missing, but they have acquired a tiger, yes, a real live big cat. Cue utter carnage and chaos as they try and piece together their missing memories and explain why one is now wearing a wedding ring. It is hilarious and a perfect palate cleanser between the more serious offerings.

We can’t end the list without including something of a more biopic nature. Some liberties were taken, but 21 is based on a true story of an MIT professor who formed an after-school club with some of his brightest students learning to count cards. Initially, it seemed to be just a bit of fun, but the students soon realised that their professor had something a bit more dubious in mind. So they headed to Las Vegas, assumed false identities and scam the casinos out of some of the most extensive amounts of money ever seen using a card counting method they devised. They were impressive, but they soon got sucked in, and the money went to their heads. Next comes a large amount of infighting and bickering, and things soon started to go wrong when the casino bosses realised something was awry.

Photo by Javon Swaby from Pexels

Tags:
Previous Article
30 Simple and Healthy Snacks
Next Article
How Competitive eSports Changed the Outlook on the Gaming Industry