Thoughts and Chicken: Revelation and Sitcom

While Broadway theaters were shuttered and demonstrations erupted across the country protesting the killing of George Floyd, an African-American, by a white police officer, the industry underwent a reckoning to be more inclusive and diverse. As stages are slowly reopening, the number of productions written by African-Americans like Keenan Scott II’s Thoughts of a Colored Man and Douglas Lyons’ Chicken and Biscuits has increased above the usual token two or three per season. 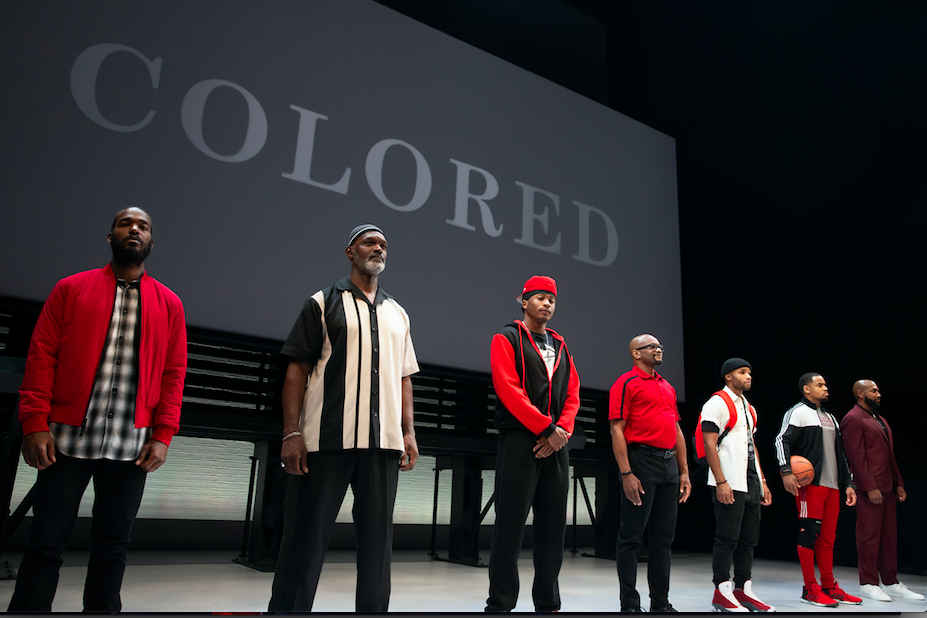 While sitting in the masked audience of Thoughts of a Colored Man, I couldn’t help reflecting that not too long ago, non-musical Broadway was dominated by white British authors such as Tom Stoppard and David Hare. A straight play by an American, white or black, male or female, was a rare thing. August Wilson was the exception, not the rule. Scott’s Thoughts is not only unconventional for the Main Stem because it addresses issues of concern for black audiences, but its form is also a rarity. This dynamic, intense piece is sort of a male version of Ntozake Shange’s for colored girls who have considered suicide/when the rainbow is enuf, one of the few non-musicals by a black author to achieve a long Broadway commercial run and announced for a revival next season. Shange’s choreopoem followed seven female characters, named only by the color of their costumes as they expressed the joys and challenges of being women and black in America in dance and poetic terms. 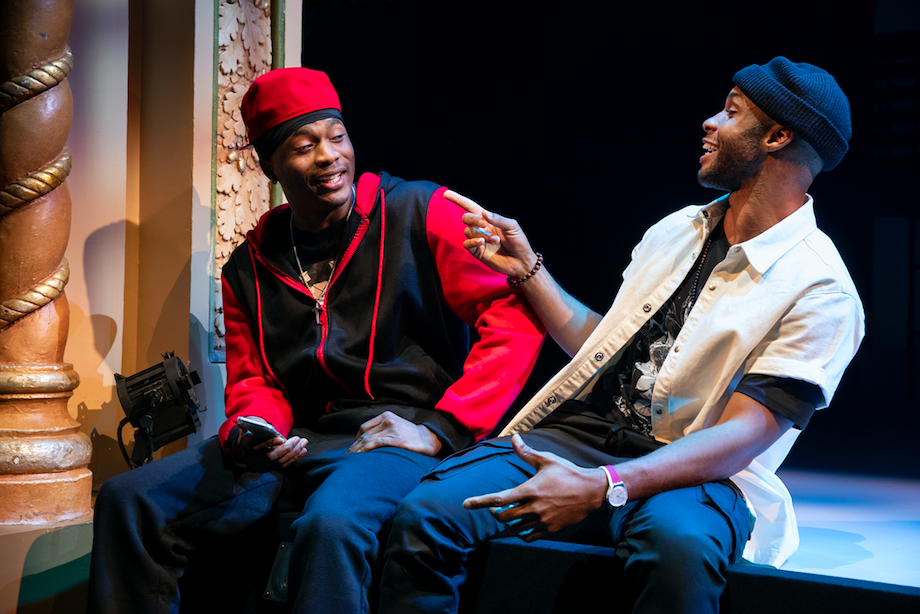 Da’Vinchi and Dyllón Burnside in Thoughts of a Colored Man.
Credit: Julieta Cervantes.

Here we focus on seven African-American men identified only by the emotions they primarily express throughout a single day in a changing Brooklyn neighborhood. There is more plot and structure than in Shange’s free-form style, but Scott is equally poetic,  imaginative and searing. From a wide-ranging barbershop confab to a high-school basketball court to waiting in line for the latest sneakers, Scott delivers a passionate panorama of the brutal and precarious state of the black male condition. Steve H. Broadax III’s fluid direction balances humor, pathos and rage.

The ensemble makes each man an individual with multiple dimensions. Particularly impressive are Forrest McClendon’s Depression, Bryan Terrell Clark’s Happiness, and Esau Pritchett’s Wisdom. McClendon skillfully suppresses Depression’s disappointment at having to work at a Whole Foods while holding a master’s degree in Engineering. His quips drip with sarcasm and his yearning for a better life is palpable. Clark finds comic gold in the elaborate charades Happiness, a gay businessman, must go through to find acceptance from straight black men. His expressions and asides to the audience when confronted with homophobia bring the house down. Pritchett exudes dignity and experience as a Nigerian emigre, seeking to pass on his sage knowledge to a younger generation.

While Thoughts of a Colored Man is an innovative and refreshing journey, Chicken and Biscuits is a familiar sitcom with touches of soap opera. It’s a mostly funny show, but too broad and melodramatic to leave a lasting impression. Both plays run two hours with no intermission. Thoughts flies, while Chicken feels overbaked. Lyons, an actor with Broadway credits, pens a feel-good family comedy-drama which has obvious comic tropes. 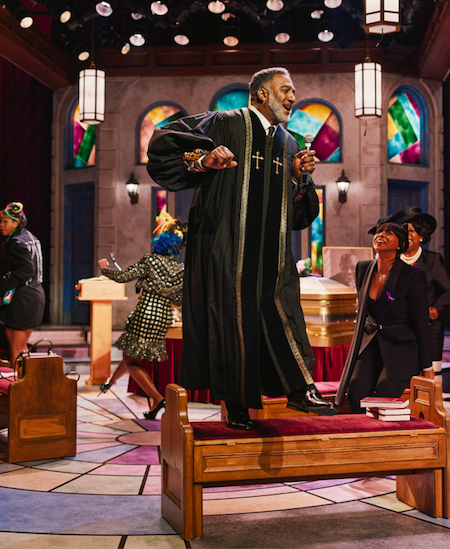 Norm Lewis (center) and the cast of Chicken and Biscuits.
Credit: Emilio Madrid

The Jenkins family of New Haven, Conn., are burying their beloved patriarch, a righteous and well-regarded minister. Of course, there are clashes between disparate siblings and couples, and deep, dark secrets ready to be exposed. Dignified Baneatta (Cleo King, skillfully suppressing conflicted emotions) spats with her flashy sister Beverly (a riotous and charismatic Ebony Marshall-Oliver). Baneatta’s daughter Simone (sharp Alana Raquel Bowers) is smarting over a break-up and takes it out on her gay brother Kenny (sturdy Devere Rogers), who has brought along his white Jewish boyfriend Logan (Michael Urie, way overplaying the character’s nervousness). Baneatta’s husband Reginald, the new pastor (the marvelous Norm Lewis, not given enough to do), just wants to maintain peace and hold the family together. Completing the company is Beverly’s self-centered teenage daughter La’Trice (Aigner Mizzelle, in a captivating comic turn) and an unexpected visitor Brianna (Natasha Yvette Williams, quietly real). 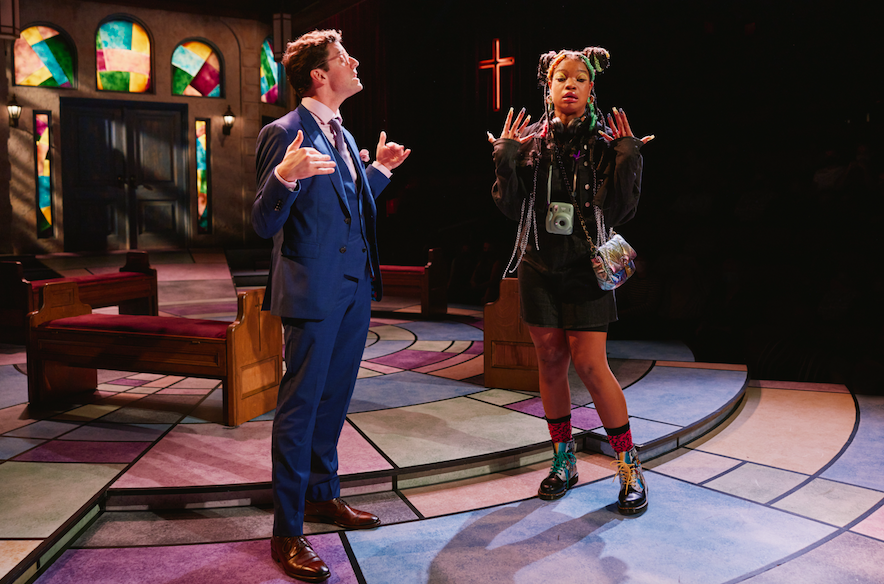 The play premiered at the Queens Theater in Feb. 2020 and its run was cut short by COVID.  Director Zhailon Levingston has given Chicken a wildly broad staging, complete with musical stings and slow-motion action to emphasize the jokes. The gags can be fairly obvious and even wince-inducing (a clueless Logan says “Mazel Tov” instead of “Amen” during Reginald’s sermon). But there are also genuine laughs and honest limning of family connections. Mizzelle is particularly moving as the scrappy La’Trice. This character could have easily been played as a cartoonish brat, but Mizzelle shows her brashness is a shield for a deep neediness. Williams has the most difficult part, that of the unknown intruder (but you can probably guess the reason for her visit if you’ve watched any TV or movies in the last 20 years). But she gives Brianna a solid center and self-knowledge. When she entered late in the play, it was refreshing to see a character without any comic schtick. Lewis, one of the bright lights of musical theater, is reduced to supporting the flashier performances of King and Marshall-Oliver, but he does have a star-turn moment while delivering an emotional eulogy. Kudos also to Dede Ayite’s character-defining, joyously fashionable costumes.

There are some tasty dishes in Chicken and Biscuits, but the chefs have laid on the comic sauce a bit too thickly. But if that’s your taste, enjoy.

All theatergoers must provide proof of vaccination and photo ID for admission and wear a mask while in the venue.