Thread A Wolf Through The Moon: Review of Where the Wolf by Sally Rosen Kindred

I say a wolf, but not all wolves are exactly the same.

Sally Rosen Kindred quotes Charles Perrault’s “Le Petit Chaperon Rouge” the famous French version of “Little Red Riding Hood,” as the epigraph of the poem “If a Wolf” in her third full-length book, the entrancing Where the Wolf.

Where the Wolf, winner of the Diode Editions Book Prize, provides vivid testimony of the ways in which Kindred rejects “the easier and overused,” as Andrew Mulvania wrote of her first book, No Eden (Mayapple). Kindred’s wolf is and is more than a figure from a fairy tale—although even in conventional retellings of that well-known story the wolf is a shapeshifter, bringing transformation in the guise of death. Kindred’s avatar wolf can manifest anywhere: in the braided gray moss on a tree, in an old well-worn coat, in a mother’s dementia, in neighborhood dogs roaming the fractured streets of 1970s suburbia, in another mother’s fears for her brown-skinned son, in the hungry and lonely self of a child of divorce. Her wolf snarls and paces and occasionally, rests at the threshold of change—a ghost, a skin, a witness, a dream. The wolf also is one of the devices that Kindred uses to loop the past to the present—sometimes in the course of a single poem—to create Where the Wolf’s non-linear but compelling storyline. 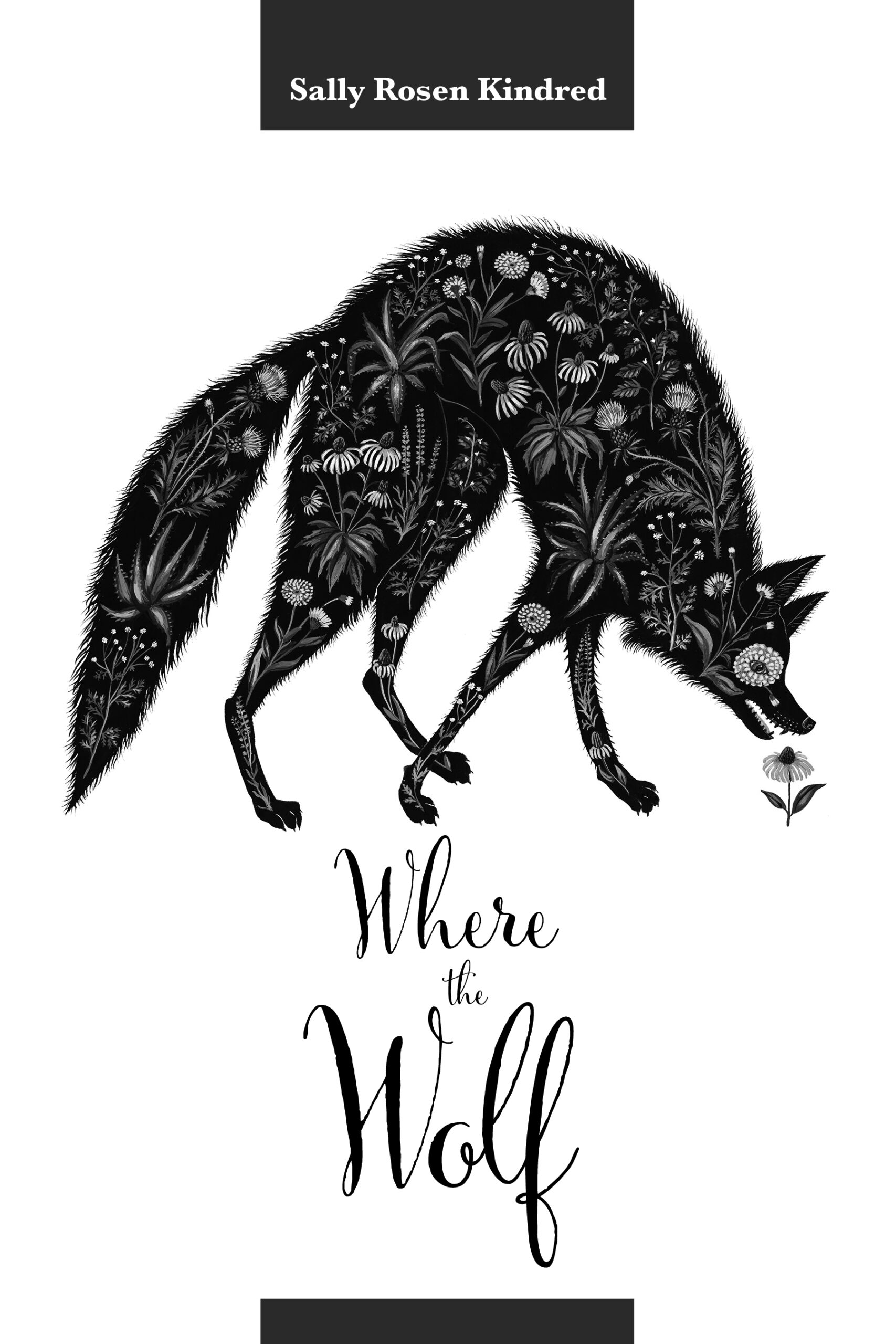 Book cover for Where the Wolf by Sally Rosen Kindred

Whether written in the persona of girl or woman, daughter or mother, seeker or caregiver, Kindred’s poems are magic mirrors, reflecting fears and desires that shimmer beyond the everyday. They invest ordinary objects with meanings that are alternately terrifying and consoling. The animistic idea that everything, from a rock to a child’s drawing to a hand-me-down dress to a burnt pan of eggs, possesses a living spirit is strong in Kindred’s work. The repetition of words throughout this book are like incantations: wolf, wing, coat, stone, fur, garnet, braid, skin.

There are many stunning poems in Where the Wolf, including self-portrait poems (“Self-Portrait at Eighteen as Weather Receding,” “Self-Portrait at Nineteen as Bottle of Yellow Pills,” “Self-Portrait at Twenty-One as Wish without a Meadow,” “Self-Portrait with Mach’s Principle, 1981”) and “Letter to My Nineteen Seventies,” which begins “Dear Nixon, dear apron, dear child’s candied tongue…” But for the remainder of this review, I will concentrate on the three poems chosen by Cultural Daily to accompany it: “First Night,” “Morning,” and “Coda: the Night Glass.”

“First Night,” the poem that opens Where the Wolf, introduces a recurring theme—the divorce that ruptured the speaker’s family—and “Wolf,” here a protective female presence, a ghostly and godlike “She” called into being by desertion and darkness (created both by the father’s physical absence and the mother’s emotional withdrawal, signified by her turning off all the lights in the house). To the ignored child, “touch[ing] the rug’s braid” for comfort and cut off from the chain-smoking mother who is “losing stars” (and whose long decline the daughter does/does not anticipate), Wolf is a refuge from pain, a wild but more satisfying mother, and the genesis of the imaginative self, the beginning of the speaker’s life as an artist. There is both profound feeling and profound irony in the poem’s final words: “…I dreamed, I hid, I held, I /would not tell.” What does the artist do but come out into the night clearing—like Wolf—and tell?

“Morning,” the imagistic poem that introduces the second of Where the Wolf’s three sections, immediately conjures its title’s homonym, mourning. “The girl,” the adolescent speaker who refuses her breakfast, “the angel of the black bowl,” is at the brink of refusing life: “the bowl won’t be her cradle.” At the same time, the black bowl dominates the poem and its physical and emotional landscape, reflecting the speaker’s desolation like a dark crystal. Is the poem’s ending bleak or hopeful? After “the girl bows her head for a blessing,” “[i]nside the black bowl, it begins to snow.” Snow is a natural phenomenon with a touch of magic, a harbinger of seasonal change, even a comforting blanket, like the fur of “Wolf” in the poem “First Night.” Also—perhaps—a sign of survival.

“Coda: The Night Glass” is the fifth of fourteen poems in Where the Wolf’s third and final section. It pulls the reader back to the speaker’s mother—as in “First Night,” the mother’s negative powers of consumption, withdrawal, and silence are pitted against her daughter’s powers of description and connection. And as in “Morning,” an object—here, a glass of red wine, the mother’s evening companion—dominates the frame. So many words for the color held by the glass: “currant, rookwood, garnet” and later, “crimson.” Like blood. But behind the mother’s force—“[s]he could thread a wolf through the moon”—is “fear.” And the center will not hold: in the speaker’s childhood, the night glass “would crack,” as in the present, the artist/daughter “howl[s] when it spills over.” Escaping the thrall of the past is hard, if not impossible: as the night glass breaks, the speaker “break[s] back into my skin.”

It is not only in the middle of life that we find ourselves in a dark wood. Sally Rosen Kindred’s work is a testament to a journey that stretches from childhood to old age, and to the struggles that spur the imagination and create the enduring beauty of Where the Wolf.

Link to buy book Where the Wolf by Sally Rosen Kindred