Can it be done?

Still wondering and not sure it can. We’re all a bit reluctant to dip a toe in life before Covid-19 because nothing’s the same now and may not be the same after. Perhaps we need more time to emerge more fully from Covid’s shadow to find out.

Theatres are no exception. Not that many are re-opening yet. Some are announcing what sound like plans for mid- to late summer re-openings. And some continue to resort to Zoom, whose theatrical future remains uncertain. Most plays do not translate well emotionally on Zoom. The human contact is AWOL. The budget for it is too.

I watched a few theatre pieces on Zoom last year. A couple worked, others didn’t. In January 2021 I wrote about the Pasadena Playhouse’s fine virtual production of the Jerry Herman cabaret medley called You I Like, and explained why that one worked so well. It had  the benefit of a decent budget. The talent was excellent, the music too, as were the visuals. It is also easier to film cabaret solos or any small group, than to capture a fully developed production that has to fill a stage. 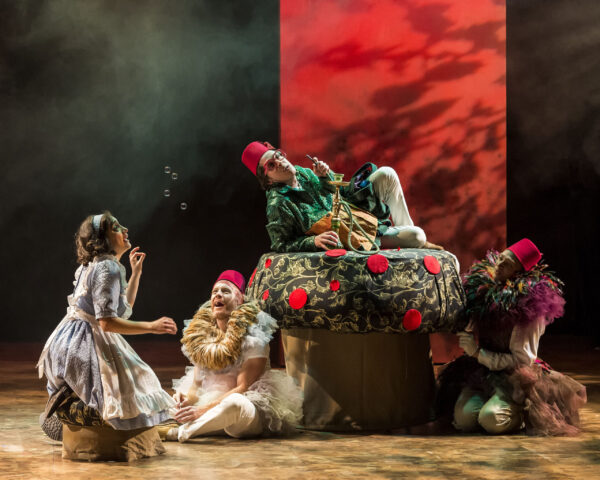 Filmed theatre done well is largely an issue of financial feasibility when you consider the added unions involved and added personnel required to film a show from several angles. As Pasadena Playhouse’s Producing Artistic Director Danny Feldman put it in discussing You I like, “cast sizes, the rights of artists and the demanding participation of the various unions” all combine to make it an expensive new equation.

So it’s fair to assume that some of the more established theatres may want  to continue the zooming practice in some instances, while most smaller theatres could be shut out of even trying. A lot also will be determined by the content and format of shows. Aside from You I like, a production such as Alice In Wonderland, now streaming at Pasadena’s A Noise Within (ANW), is well positioned to succeed in this medium.

The reason makes sense. This Eva LeGallienne/Florida Friebus stage adaptation of Lewis Carroll’s classic is inherently zany and nonsensical enough to show off  Zoom at its best. “A world turned upside down and inside out… filled with brilliant language, unforgettable characters, and a lasting wisdom, seems especially timely,” says ANW’s Artistic Co-director Julia Rodriguez-Elliott. Truer still is the supremely logical illogic of the script that liberates all aspects of the new medium. It can cover up any flubs that might occur in performance and not alter an iota of our enjoyment. 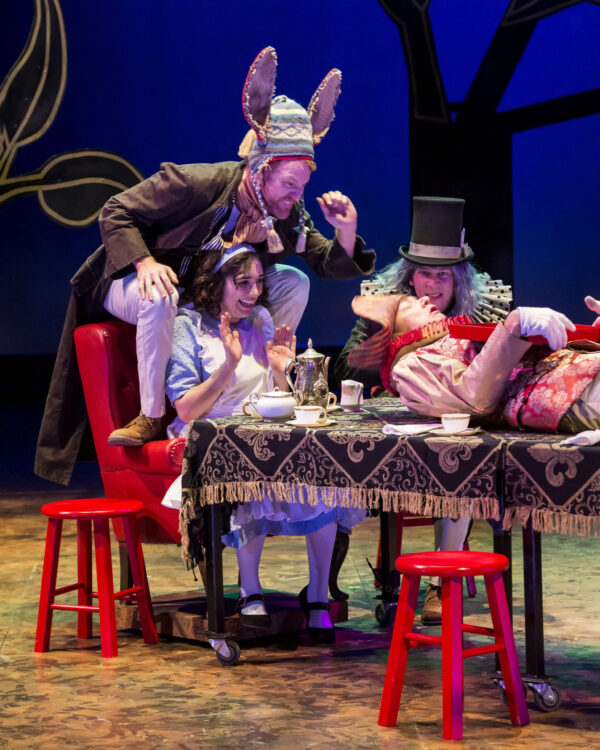 Originally directed for the stage by Stephanie Shroyer, the production had been intended for a Spring 2020 run — until it was truncated by Covid’s arrival. In the anno horribilis that followed, it was retooled and readied for this 2021 Zoom re-emergence, with Rodriguez-Elliott at the helm this time, adapting the Shroyer staging for the Zoom cameras, while inviting the experienced Andressa Cordeiro to join the company as Director of Photography.

And it works, largely thanks to Carroll’s pixilated imagination. Many company stalwarts are on board in this switch of medium, including lighting designer Ken Booth, costume designer Angela Balogh Calin and her  quirky inventions, plus such dependable company regulars as Jeremy Rabb, Rafael Goldstein, Kasey Mahaffy, Susan Angelo and the versatile Erika Soto as the prim, proper and very British Alice. 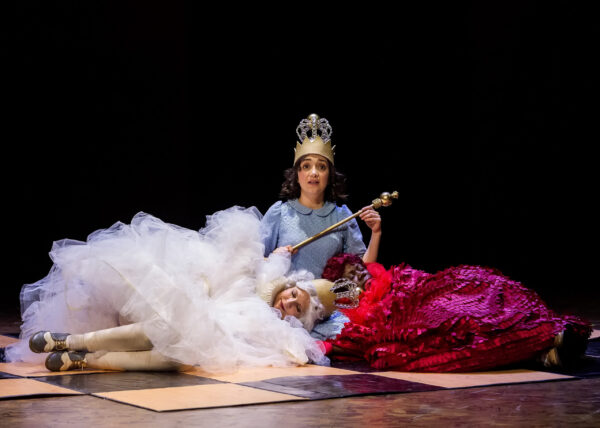 So Zoom works well for You I Like and for Alice, but what about other shows? As usual, it depends — not just on the refinements of the Zoom presentation, but also on the playwriting and production values.

Two shows I streamed earlier this year came from North Hollywood’s Road Theatre. Harrison David Rivers’ This Bitter Earth (now closed) was well directed by Gregg T. Daniel. Despite its title, it focused on an interracial gay relationship and the problems the partnered men were having with their differences. There was nothing particularly new there. Their disagreements were mundane for the most part and could easily be attributable to any romantic relationship, gay, heterosexual or anything else. And, ho-hum, how many plays of that kind have you seen…? I thought so. The acting by Matthew Hancock and Chase Cargill was sharp and engaging, but Rivers’ script was only mildly involving, not enough to overcome that nagging sense of déjà-vu. 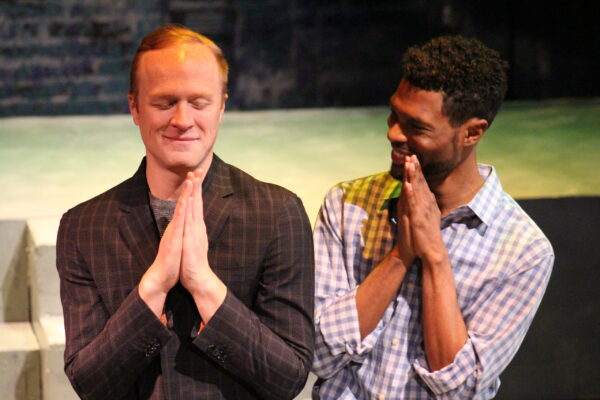 The cast of This Bitter Earth at The Road Theatre, earlier this Spring. Photo by Lizzy Kimball.

The opposite might be said of Steve Yockey’s Reykjavík. His play is a bare-bones fever-dream about gay male dalliance under the Icelandic Northern Lights. Directed by Ann Hearn Tobolowsky, it is a collection of intimate short scenes that extend their reach into other worlds that include talking ravens and  other vaguely hallucinatory manifestations. Weird? Yes. Forcibly and intentionally so.

The acting and directing is professional and I would like to think that it has found its audience, since The Road has just extended the streaming run to June 13. The piece struck me as an offbeat attempt merely to shock, and hopefully amuse, though to no perceivable end. But given the extension, and barring wishful thinking, there may well be a market for it. 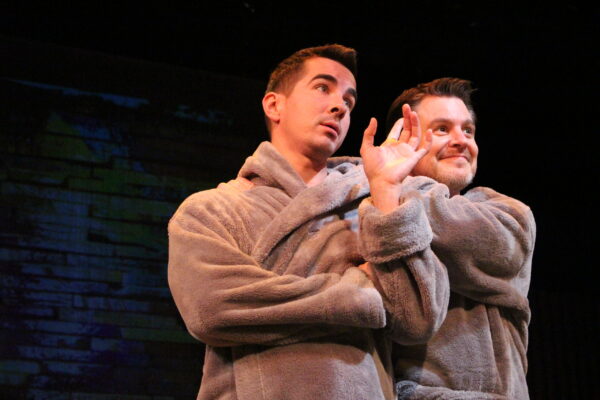 The claustrophobic year of Covid we’ve all experienced has more than likely taught each of us something new about ourselves. What I’ve learned about me is that I can become lazy under such constraints and now need to retrench, reassess and re-evaluate my horizons. I will continue to write about the art of theatre as long it remains an art and as long as I’m lucky enough to be aroused by the force of its magic when it is magical. (No more retreads, please; nobody needs them.) We live in a complex world that changed profoundly in 2020 and is making inroads and urgent demands on our sanity and attention. I hope to remain open and alert to that call, wherever it may lead. Say tuned. And stay safe, vaccinated or not.

WHAT: Alice in Wonderland

WHERE: Streaming at A Noise Within

TICKETS: $25 for individuals, $40 for a family, available at anoisewithin.org.

WHERE: 48-hour Rental at The Road Theatre.

WHEN: Anytime on-demand streaming of Reykjavík through June 13.

Top image: The cast of Alice in Wonderland at A Noise Within.