Trevor‘s Heart Makes Up for Its Flaws

The new musical Trevor could easily have been an extended Afterschool Special, an overly preachy message tuner with more PSA vibes than entertainment value. Set in 1981, the show follows the travails of a show-biz-loving adolescent discovering his gay sexuality and attempting suicide after a humiliating incident in middle school. He meets a sympathetic volunteer in the hospital with a shared interest in pop music divas and learns to accept and value himself. There are elements of syrupy sweetness and caricatures in this musicalization by Dan Collins (book and lyrics) and Julianne Wick Davis (music), but fortunately, they are balanced out by moments of genuine empathy, pathos and honesty. 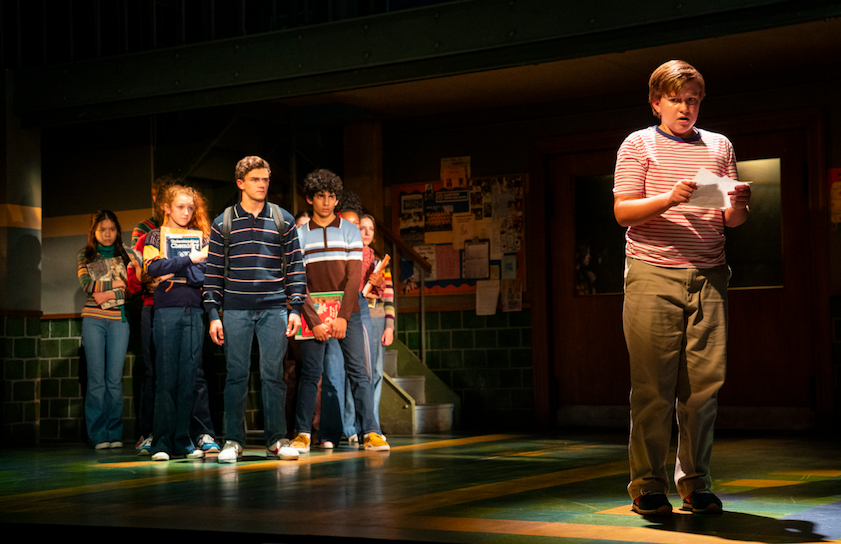 Trevor began life as a ten-minute monologue in actor-writer James Lecesne’s solo show Word of Mouth and then morphed into an Oscar-winning short film. The film led to creation of the Trevor Project, a suicide prevention helpline for LGBTQ youth. Since the original material was so brief, yet powerful, Collins’ book can feel a bit stretched out and repetitive at times. It even verges on sitcom with Trevor’s parents, friends and teachers coming across as two-dimensional gag lines. In order to extend the show to a full evening and provide musical opportunities, the school talent show is now the driving force of the first act. Rejected as onstage talent, our Diana Ross-obsessed protagonist talks his way into choreographing a dance specialty for the football team featuring his crush, the star quarterback Pinky (a purposely ironic name for a super-straight character). Meanwhile, Trevor is increasingly pressured to “act normal” as his friends Walter and Cathy awaken to their hetero desires.

Trevor’s secret passion is revealed through a contrived bit of business (he leaves his journal out in the open), bringing the Brady-Bunch-like first act to a close. Collins’ second act is much stronger and believable as the hero deals with the fallout from his unintentional coming out. Throughout, Marc Bruni’s staging is fast and flexible and the songs are serviceable and bouncy (though they are shown up by actual Diana Ross numbers interpolated for the fantasy sequences).

Luckily, Trevor is played by the capable young Holden William Hagelberger who carries almost the entire show on his teenaged shoulders with aplomb and grace. It’s refreshing to see a character like this—a flamboyant, funny kid who is usually relegated to comedy relief—as the star of a musical and Hagelberger endows him with wit, energy and dimension. He sings beautifully and ably conveys Trevor’s love of dance through Josh Prince’s sprightly choreography. He’s quite an actor, too, giving full vent to Trevor’s ecstatic highs and heartbreaking lows. 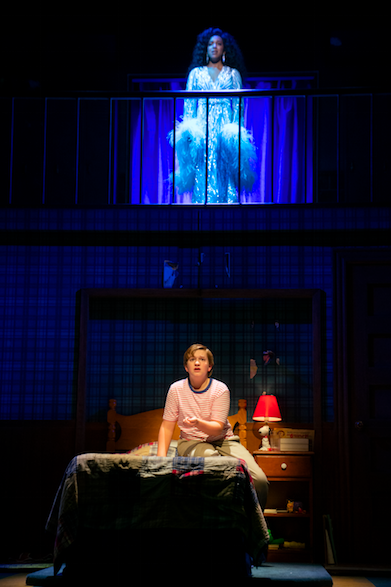 Sammy Dell gives Pinky a beating heart beyond the jock stereotype. Alyssa Emily Marvin finds humor in the nerdy Cathy’s surprising aggressiveness as she eagerly removes her rubber-band braces for some ardent necking and makes no bones about her romantic interest in Trevor. Aryan Simhadri provides laughs and support as the science-loving Walter. Sally Wilfert and Jarrod Zimmerman are tasked with playing all the adult roles and descend in to cartoonishness at times, but truthfully reveal the conflicts of Trevor’s parents. Yasmeen Sulieman displays diva depth as Trevor’s fantasy version of Diana Ross. Aaron Alcaraz has a touching cameo as the sympathetic candy striper who encourages the protagonist to continue loving life and Miss Ross.

Trevor is not a perfect show, but it has more than enough heart and compassion to make up for its flaws and gives us a funny, positive, triumphant gay teen for a hero, a rarity in any medium.

1
Tags:
Previous Article
Lessons to be Learned #5 – The Challenges and Wonder of Childhood
Next Article
Indigenous People in the US