Last Friday, I asked the gardener to cut back all the ivy in my front yard. It was getting too thick. When that happens, rats love setting up housekeeping in its folds. The gardener did a very good job, and told me he only saw one rat jump out and take off in the direction of my neighbor’s yard. No surprise there. We’re used to all kinds of critters in Laurel Canyon. Well, almost.

When I took my first look at the tomato plants growing in my back yard early the next morning, I noticed that the only two ripe tomatoes I had were gone. RATS, I thought! DARN. I threw something on and ran out to check.

Not only were the two red tomatoes gone, but all of the green ones had vanished as well, about a dozen all told. I thought to myself those critters got their revenge. Then I took a look at the strawberry beds that, like the tomatoes, were not doing all that well this year. The surprise there was that not only had the berries disappeared — green or red — but the plants had been gnawed, stems and leaves, all the way down to the nub. I wondered what legions of rats had we aroused in such battalions? Even the clay planters that harbored strawberry plants had been raided with devastating success

Forget disappointment. This rankled. And all for doing a good job on the ivy?

That night I covered the handful of more or less intact strawberry plants with garden mesh to try to salvage them. I did the same with the small fig tree, a treasure with a serious pedigree that dates back centuries to Pergamon, Turkey; it’s the magical product of a four-inch twig picked from a giant parent, large as an oak, that I’d brought home from a visit to that mountaintop city. This offspring had a number of unripe figs on it that I wanted to protect.

At the last minute, I decided to leave the back yard lights on all night hoping to add a layer of deterrence from the attackers. Then I put the blind down, watched some TV, did some reading and at 11:30 decided to turn in.

After switching off the bedroom light, I raised the blind. In the relative dimness of the outdoor lighting, I noticed a large mass or shadow at the extreme right end of the strawberry bed, less than a dozen feet from where I stood. A coyote? It wasn’t moving. A corpse? Looking more closely, I was stunned. The “mass” was a very large, magnificent doe comfortably reclined on what was left of the strawberry plants she had been feasting on and where she now was enjoying a moment of rest in the balmy evening.

I ran to my iPhone hoping to snap a picture of her, but the light was too dim. This bit of activity in my room got her attention, but not her concern. She raised her head slightly, not yet ready to get up or move on. She turned her head in my direction without alarm. She couldn’t see me, of course, rooted in place in my dark bedroom, eyes unswervingly fixed on her. We remained in this unlikely standoff, with her enjoying the coolness of the night and me, feet nailed to the floor of my room. 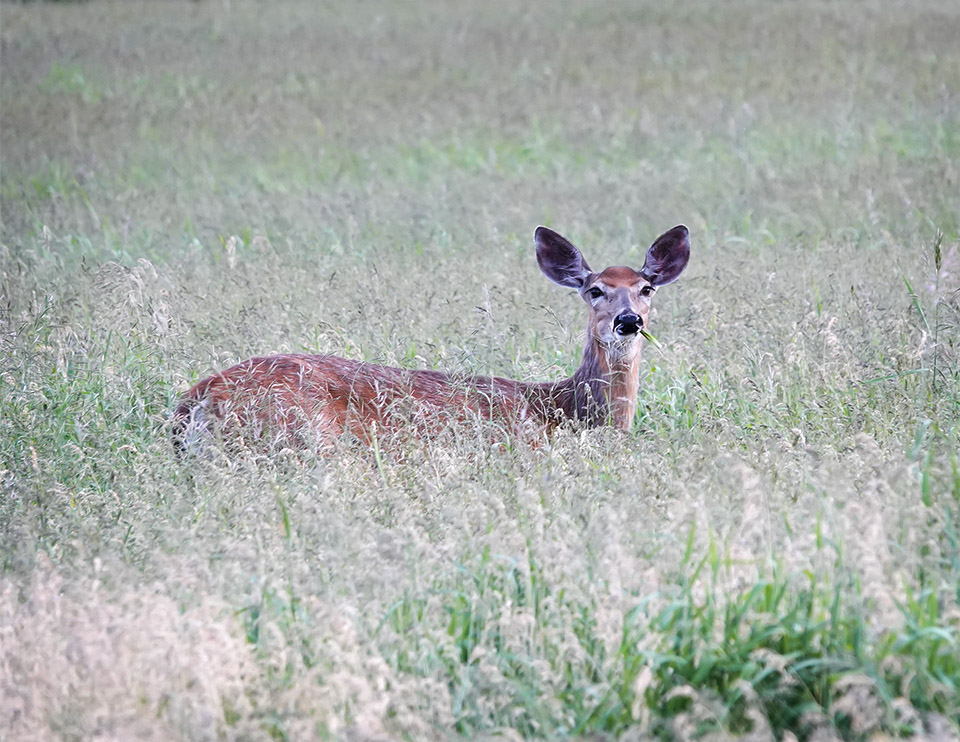 A white-tailed deer, similar to the one I saw but couldn’t photograph.

After about fifteen minutes she stood up lazily, revealing her full grandeur for the first time. Including the long neck and oversized quivering ears, her height easily matched my own 4’10.” She ambled gracefully toward the small Chinese Magnolia on the hill, sniffed its leaves taking no bites. She then wandered casually to the left and up the hillside and vanished into the dark at the top.

I’ve lived in this house for more years than I care to say, but I have never had such a seductive uninvited visitor. I knew we had deer in these hills, but I had never seen a live one, let alone one that size, in my own back yard. She returned two or three more times, polished off a few more nibbles, and was glimpsed roaming the streets by others.

It is not many cities the size of Los Angeles that can boast of such wild life intrusions at its very heart. Laurel Canyon has a storied past which touched on the lives of many celebrities, actors, directors, musicians, going back to the start of the 20th century and the birth of silent film. More recently it played a big role in the housing of rock musicians and the expansion of rock music. But Laurel Canyon was first and always home to a menagerie of many other native creatures.

It’s quite a zoo up here. We have raccoons, possums, the rare bobcat, rattle snakes, gopher snakes, mice, rats, skunks, squirrels, spiders, bees, wasps, yellow jackets, butterflies, monarchs, owls, hawks, crows, woodpeckers, plus an enviable variety of delightful songbirds, captivating mockingbirds, and, of course, deer. My neighbors and I are the lucky recipients of this extraordinary bounty.

Had I possessed entire groves of tomatoes and many fieldsworth of strawberries, I would gladly have deeded them all to this uninvited doe, this majestic creature who entered my life so late and surreptitiously, and left it so much richer than it was before.

Above is what she looked like, only even better.

Images:  The California Whitetail doe, similar to the one who came to visit.

1
Tags:
Previous Article
To the Tree: a Photographic Paean
Next Article
The MisAdventures of Chris Siders