Understanding the Himba Culture through Binti

We have all likely seen images of Namibian Himba women, but most of us do not recognize them. For many, the women in desert regions, with skin and hair coated with red clay, are quite simply “African.” There is little attempt to go beyond that label, ignoring the simple fact that Africa is a vast continent. Also, geography unites Africans, not cultures. The homogeneity expected of inhabitants of the African continent is bewildering.

This cultural generalization is just one of the many thoughts that struck me when reading Binti. Like many, I had seen images of Himba women but had no idea about their identity. Binti, the eponymous heroine, is a Himba woman in a world years into the future—a period when intergalactic travel is possible. However, the Himba people in the book are an inspiration rather than an exact representation of the indigenous community. The novella is a brilliant piece of science fiction classified by Nnedi Okorafor, the author, into the self-defined subgenre of Africanfuturism (distinct from Afrofuturism). It is the first in the trilogy, all of which follow Binti – and her journey of self-discovery and growth.

While the Namibian Himba are semi-nomadic, the community in the book is sedentary with deep roots in their native lands. This sedentariness makes Binti an outsider when she travels off her home planet to study at Oomza Uni. As she boards the spaceship – called Third Fish, she encounters taunts and discriminatory comments from the lighter-skinned Khoush people. The Khoush comment on Binti’s skin, clothes, jewelry, and otjize – the paste made of red clay and perfumed oils traditionally applied by the Himba on their skin and hair.

It is understandable that Binti – the first of her people traveling to space, creates curiosity for the others. But this attitude of looking down upon cultures is reminiscent of the racism that the world struggles with today. Also, the Himba are technologically advanced people who invent the astrolabe – a commonplace to everyone on this futuristic earth. It is also a piece of compulsory equipment for those who travel. Their reputation and vast repository of knowledge are completely forgotten by the predominant Khoush who use their technology, even as they look down upon them. 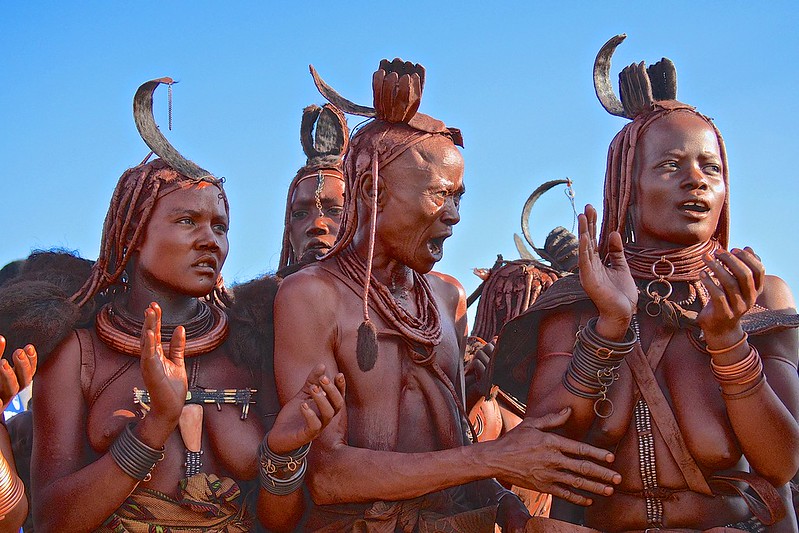 The Power of Otjize and its Importance in Himba culture

The most obvious connection between the Himba in the book and the real-life Himba is the use of otjize. It also has similar purposes: protecting the wearer’s skin and hair from the harsh climates they inhabit.

What is also similar to real life is the portrayal of the non-Himba perception of otjize. Ingrained notions equate mud and clay with dirt, and these ideas color their opinion of the Himba. A Khoush woman calls Binti’s people – dirt bathers and filthy – even claiming that the otjize on her body stinks while it is perfumed.

The prejudiced flaw in these beliefs is exposed as soon as one invests just a little time researching the uses of otjize. It not only protects from the sun and extreme heat but also helps keep away troublesome mosquitos. It acts as a sort of make-up, beautifying women’s skin. This last function has only lately begun to garner acknowledgment by the Western world, as research reveals the inherent benefits for skin health in clay and ochre. The Himba’s long-held use of the paste in this manner demonstrates a strong connection with the earth and a deep understanding of its properties that helps them survive in water-starved surroundings where others might have perished.

In Binti, otjize proves to have unexpected functions as it heals the burns on the Meduse’s tentacles. Besides signifying her heritage and tradition, the otjize becomes a symbol of Binti’s peacemaking ability that helps her resolve conflicts: between Oomza Uni and the Meduse in the first novella and later ones between Khoush and Himba, and between Khoush and Meduse.

Binti, an Africanfuturist novel, is a beautiful work that provides much-needed exposure to a culture not very well known. By pivoting around a Himba character, Okorafor sows interest in the reader by exploring the themes of race, culture, and discrimination. It is much needed in the divisive atmosphere today, and the process of reading it illustrates the value of overcoming prejudice to move towards understanding.

Sophia is an online ESL/EFL instructor and a passionate educator. She found her true calling — teaching — while she was juggling writing and a 9-5 desk job. When she is not busy earning a living, she volunteers as a social worker. Her active online presence demonstrates her strong belief in the power of networking.