Derivative figure from a photograph

How to interpret key composition elements from a generic photograph into a derivative graphic figure?
In the feature image of a bench in winter the muted color combination, with one strong contrasting element and with the simple repetitive horizontal composition inspired me to overlay, phantom fashion, the letter “F” (for “figure”) onto a derivative graphic figure, as shown below.

The pairs of images I will present and discuss, in terms of the derivation process from photograph to drawing, were selected for the variety of subject and composition of the generic photograph and for the visual discoursing challenge (*) required by the figure derivation process.
(*) By visual discoursing I mean the perceptual appreciation by the eye of the decisions involved in the formal development of a work of visual art. For more details refer to this piece.

Figure derivation from a storage shelving

The heart of the derivative figure lies in the two non-orthogonal elements of the generic photograph: the roll of paper and the leaning documents.
The letter F took the place of the chairback and the vaguely human profile took the place of the shelving. The color scheme was of course pure invention, discussed in the End Words. Figure derivation from a fruit bowl

The “parti” taken in the derivation process was the flattening of the composition into something of a poster, and the outlining with a white border of its compositional elements.
The black and yellow rendering of the letter F and its placement below the bowl edge, as if part of what it contains, constituted the eye-catching bit of the figure. Figure derivation from a light bulb and a garlic clove

This derivation is the most “figurative” of the selection since the photograph was itself a composed subject i.e. a photographic figure of sort.
The color scheme of the graphic figure, similar to all the others, combines the colors of the rainbow for best expressive effect. 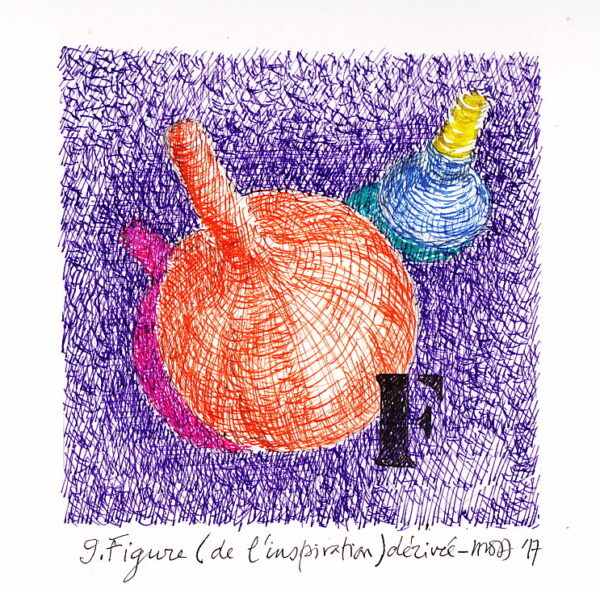 Figure derivation from a seated couple

The inverted V at the center of the photograph, combining a leaning tree trunk and the seated couple, provided the heart of the figure derivation, where it was treated in an abstract manner.
The choice and placement of colors of the derivative figure involved color masses outlined in white with the yellow and red high contrast of the inverted V producing an effect of three dimensionality; the F was treated in phantom fashion. End words about the “F” and the colors in the drawings

The choice of the basic rainbow colors and the inclusion of the letter F, for figure, were given (*) from the start of the visual discoursing process.
See this previous post dealing, in part, with the structural visual effects of these colors and the incorporation of letters and ciphers in a work of art.

End words about the subjects of the photographs

These subjects include street furniture, storage shelving, a fruit bowl, a garlic clove and a light bulb of similar shape and, finally, a couple sitting on a bench.
Given this variety of subjects, the derivation process had to search for “the” remarkable subject-form pattern in each photograph that would lend itself to becoming recognizable as key feature of the drawing … THAT was the work of the visual discoursing process.

Credit all photographs and drawings to Maurice Amiel