Voyeur: Street Theater in the Time of COVID

COVID vaccinations are ramping up and restrictions are beginning to loosen, but variant strains threaten another pandemic surge. Thus the reopening of Broadway and Off-Broadway theaters is still months away, probably the fall of 2021 at the earliest. However, a group of New York theater artists have cleverly circumvented the virus with an innovative event to feed your hunger for live performance while maintaining safety protocols. Voyeur: The Windows of Toulouse-Lautrec has been running since October and touts itself as the longest-running live pandemic performance piece in New York City. 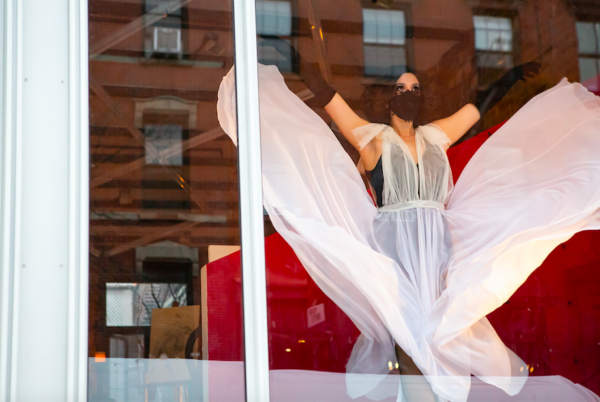 Conceived and directed by Mara Lieberman and presented by Bated Breath Theatre Company, Voyuer is a combination walking tour and live art collage depicting the tragic life and work of the titular diminutive painter. Lautrec left his middle-class family to depict the demi-monde of prostitutes and dance halls in garish, colorful posters. Socially distanced and masked audiences of eight follow a clownish tour guide cranking an antique music box through the streets of Greenwich Village, stopping at storefronts and doorways depicting scenes from Belle Epoque Paris. The tour is dazzling and involving, a trip into another era and a welcome respite from our own dark one.

The guide impishly labels his audience as voyeurs as they watch the acts. Puppetry, dance, opera, and mime are used to convey Lautrec’s torment. He longed to escape his physical limitations and join the chorus girls at the Moulin Rouge and sex workers in the gutters who freely celebrated their bodies and carnality.

Lautrec is portrayed by a series of beautiful, life-like miniature puppets designed by James Ortiz and manipulated sensitively by Clint Hromsco, Melissa Cabey, and Sarah Gagarin. We encounter Lautrec’s disapproving father (pompous, blustering Gregory Marlow) and then his mother (sensitive Chloe Bell) in the most imaginative vignette. She is attired in a gigantic hoop skirt and the drama of her son’s difficult birth is played out in shadows underneath her outlandish garments. Christopher Metzger designed the versatile costumes. From there, we meet younger versions of Lautrec’s parents (Josh McWhortor, Annika Rudolph) performing an intense pas de deux with a picture frame, symbolizing their sterile union, and various models and prostitutes who serve as inspiration for the artist’s works. At one point, patrons will find themselves accompanied by two sopranos exquisitely vocalizing the gorgeous Flower Duet from Lakme. (Three singers who alternate—JoAnna Geffert, Brooke Larimer, and Jacqueline Shoda-Iwasaki—are listed in the digital program.) 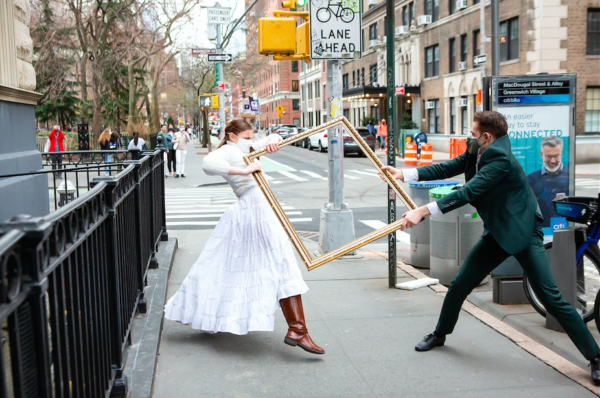 The performance concludes with the daring act of sharing an interior space, made into an dream-like evocation of Lautrec’s atelier by designer Sandra Terhani. Once we are inside, Katherine Winter delivers a passionate solo dance expressing both an exuberant can-can and then an agonized cry for help. Sarah Gagarin follows, enacting both Lautrec’s final moments and the pained reaction of Jane Avril, the Moulin Rouge singer whom he loved.

Voyeur is a fascinating mosaic of an artist’s life and a refreshing return to live theater, albeit a fragmentary one. After months of confinement, there was something liberating and joyous about just walking through the streets of the city with other people. Passers-by interacted with the cast to create a unique communal experience. 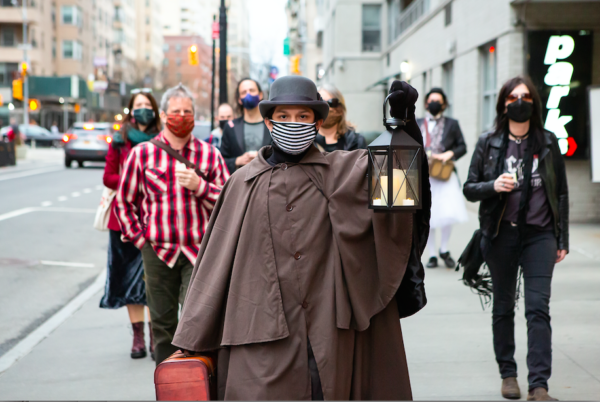