Of the dozens of movies directed by women in 2020, many are being released in January-February 2021, due to new eligibility rules for Golden Globes and Oscars. So I split my review into two articles, click here to read the first one, Women Directors 2020, and scroll below for more.

The Assistant, written and directed by Kitty Green. Julia Garner plays the newly hired assistant of a movie producer, and we witness in excruciating detail the countless humiliations that she has to endure in her lowly position. The director says: “A lot of my friends had worked for predatory bosses at places like The Weinstein Company and Miramax. The film, whilst it’s a personal and intimate story, is dealing with bigger structural issues and problems. Until there’s a shift around gendered labor, and what tasks women should be assigned, nothing’s going to change.”

Never Rarely Sometimes Always, written and directed by Eliza Hittman. A teenager (Sidney Flanigan) from a rural town in Pennsylvania travels to New York City with her cousin (Talia Ryder) to obtain an abortion. Hittman says: “Thinking about how it’s so difficult to access a legal abortion in our country, I picked up this project again in 2017 when Donald Trump was inaugurated. I interviewed counselors and abortion providers, we shot at real Planned Parenthood facilities. I was inspired by a handful of really incredible female filmmakers that I love, Chantal Akerman, Agnès Varda, Andrea Arnold, Lynn Ramsay, Jane Campion.”

Yes, God, Yes, written and directed by Karen Maine. A teenage girl (Natalia Dyer) attends a Catholic retreat in the year 2000 and discovers her sexuality. The director says: “The film is based on my own adolescence. I went to Catholic school in Iowa for thirteen years.  Until I got my period, I didn’t know where my vagina actually was, my mom made no mention of the clitoris or the G-spot. Catholicism teaches that self-pleasure is sinful, so I wanted to portray masturbation as normal and to show my protagonist coming of age sexually through the exploration of her own body.”

How to Build a Girl, directed by Coky Giedroyc from the 2014 semi-autobiographical novel by Caitlin Moran about the pitfalls of becoming a rock and roll journalist at 15 in 1990s Wolverhampton, England. The writer says: “If you’re talking to male directors you have to explain normal things that girls talk about, like menstruation, whereas a woman gets you straight away.”  The director says: “It was always my hope and intention that my film appeal to fifteen year old girls and their mothers.”
I had featured Beanie Feldstein for Booksmart by Olivia Wilde in my article about Young Faces in 2019 Movies.

How to Build a Girl © IFC

Music, directed by Australian pop singer-songwriter Sia, with whimsical dance numbers and songs by Sia. When a non verbal autistic girl (Maddie Ziegler) loses her grandmother, her half-sister (Kate Hudson) steps in to take care of her. Sia says: “The story is based on a young boy on the autism spectrum whom I met in an AA meeting and on his mother. I love movies that break your heart, then make you laugh and put it back together again. They are a chiaroscuro of lightness and darkness, but there is humor as well. The whole purpose of art is to create feelings.”

Babyteeth, directed by Shannon Murphy from the stage play by Rita Kalnejais. A teenage girl (Eliza Scanlen) living in Sydney, Australia, is dying of cancer, her mother and father are at a loss on how to deal with this tragedy. The director says: “Milla has to step up into the adult role in her own family dynamic, because her parents aren’t coping.  We met a lot of very sick people and they told me that they wished that the doctors would stop trying to medicate them, when they didn’t want that anymore, because everyone’s too afraid to let a child die the way they want. With the film coming out during this pandemic, it’s important to stop and pause, cocoon yourself with your loved ones and to really slow down and take the time to appreciate them.”

Kajillionaire, written and directed by Miranda July. A 26-year-old (Evan Rachel Wood) raised by her grifter parents (Richard Jenkins, Debra Winger) does not question their lifestyle until she meets a sympathetic friend (Gina Rodriguez). July says: “These parents have rejected all material comforts, they’re outsiders by choice and very self-righteous with an incredibly rigid worldview. Once you leave your family of origin, it is often the people you meet next who re-parent you, give you the experiences and tenderness that you might have missed as a child.”

Herself, directed by Phyllida Lloyd from a screenplay by Clare Dunne. An Irish woman (Clare Dunne) who left her abusive husband decides to build a small house for herself and her two young daughters. The director says: “Clare Dunne’s friend was running from an abusive relationship with three children and became homeless in Dublin. She was outraged that there was so little housing available to give her an emergency home. In this time of the pandemic, we know that there are so many people all over the world who are now trapped, even more dangerously, in situations of domestic abuse.”

Nomadland, written and directed by Chloé Zhao from the 2017 non-fiction book by Jessica Bruder, Nomadland: Surviving America in the Twenty-First Century. I saw this movie at a drive-in premiere at the Rose Bowl. When her husband dies and she can no longer live in her home, a woman in her sixties (Frances McDormand) goes on the road in an RV and becomes part of a community 0f van dwellers. Zhao says: “If you spend time with nomads, you’re going to be talking about rocks, about mountains, about where the sun comes up. We lost a little bit of that living in the concrete jungle of the city, and now, more than ever, we understand as a people that nature heals.”

The Short History of the Long Road written and directed by Ani Simon-Kennedy. A teenage girl (Sabrina Carpenter) grew up traveling around in an RV with her father, when he suddenly dies she continues with that lifestyle.
I had mentioned this film in my report on the Oaxaca Film festival.

Land, directed by Robin Wright. A grieving woman (Robin Wright) retreats to a remote mountain cabin. The actress/director says: “This woman felt that the only way to escape the normal life that she once knew, which was ripped out from under her, was to go to the wilderness and try to survive there. Then someone (Demián Bilchir) comes into her life and allows her to believe again in faith and hope. This film is about the resilience of humans and how we do need the kindness and the compassion of other human beings to help us get through difficult times.”

Wander Darkly, written and directed by Tara Miele. After a car accident a woman (Sienna Miller) believes she has died, her husband (Diego Luna) helps her remember the best times of their relationship. The director says: “My husband and I did survive a pretty bad car crash about seven years ago. I was quite concussed, and it seemed so obvious to me that I had died and that we wouldn’t raise our kid. Thankfully, that just lasted for a moment, but it was such a strange and real sensation. I hope that people take away from this film a sense of the resilience of the human spirit.”

On the Rocks, written and directed by Sofia Coppola. A wife and mother (Rashida Jones) suspects that her husband is having an affair, so she spies on him with the help of her father (Bill Murray). The director says: “As a creative person, I was curious to look at the crisis feeling of having small children, having to reinvent how to be a mother and an artist and also fully engage in a relationship. There’s a lot of pressure on women these days by society to be a great mother and a great cook, to go to work and be attractive. A lot of my friends and I feel that pressure to do it all, which I think is unique to this generation.”

On The Rocks © Apple TV

The Old Guard, directed by Gina Prince-Bythewood from the graphic novel by Greg Rucha about a team of immortal warriors led by Andromache (Charlize Theron), whose purpose is to protect mankind. The director says: “This is a story with mythological elements, themes of relationships, family and love that were very appealing to me, but it presented me with the opportunity to put female heroes into the world, show two badass women on screen, one of whom is a young black woman (Kiki Lane). Courage has no gender.” 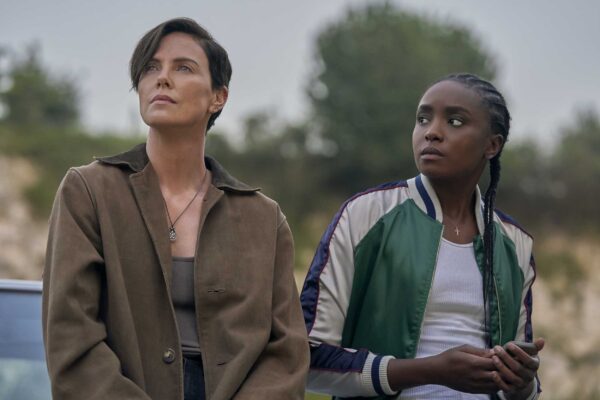 The 40-Year-Old Version, written and directed by Radha Blank. It’s the true story of the black rapper, playwright and filmmaker, who is playing herself. “I made the film as a love letter to New York’s hip hop culture, to the unsung black struggling artists in Harlem. My character is not trying to be a big star, but she is using the rhymes as a meditation to get through her grief and frustration. The truth is that you don’t age out of your passion, and anyone from any walk of life can apply that to their life and their dreams.”

One Night in Miami, directed by Regina King from the 2013 play by Kemp Powers. Malcom X (Kingsley Ben-Adir), Muhammad Ali (Eli Goree), Sam Cooke (Leslie Odom Jr,) and Jim Brown (Aldis Hodge) meet in a hotel room after Cassius Clay’s boxing victory in 1964 and talk about the responsibilities of black leaders. The director says: “I was listening to these legendary men speaking about the black man’s experience. For black Americans, unfortunately, those conversations that were happening 60 years ago are still happening now. After the pandemic hit, George Floyd, Breonna Taylor and Ahmaud Arbery were murdered, and this movie is coming out now at a time when an uprising is going on in our country.”

One Night in Miami © Amazon Studios

Here’s some other movies directed by women in 2020: