How can Wright’s ideas and principles help a young generation to create better livable cities and human settlements? This is the central question that motivated me to start the production of a feature documentary, The Wright Way, as a transformational film that may benefit people of all cultures around the world. I know that when young people begin to study Frank Lloyd Wright, a better future will be invented based on the laws of nature, which includes human nature.

Wright’s iconic works should not be turned into objects of worship, nor should his writings become a dogma. After studying Wright in depth, his ideas should be challenged to generate new ideas. By learning from history and from Wright, a new generation of designers willing to transform the world can get inspired to create original organic architecture from the city to the private dwelling.

Having visited many of his works, including less famous Usonian houses, and having met with some of his best followers, The Wright Way Hint “hints” at the production of a feature documentary that may contribute to a needed global transformation. 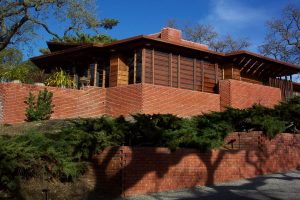 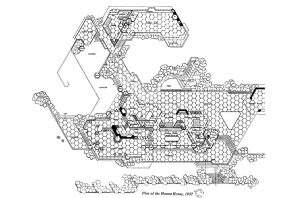 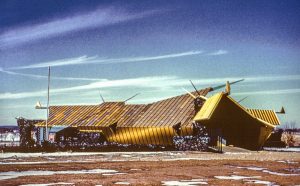 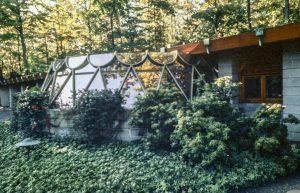 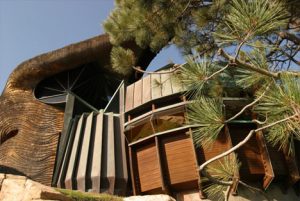 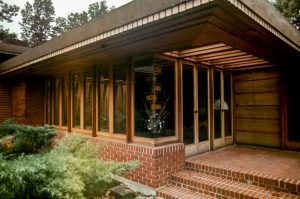 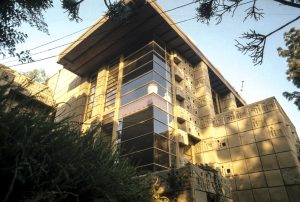 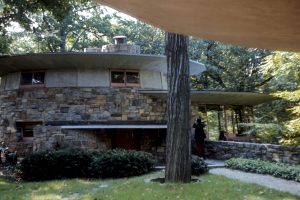 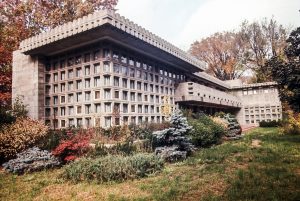 In 2016 the General Assembly of the United Nations adopted a resolution of 17 Sustainable Development Goals for 2030. They included:

It is an ambitious wish-list out of which architecture can play a vital role (Goal #11.) If adopting Wright’s organic architecture principles, the result could extend a sustainable life on Earth well beyond 2030. 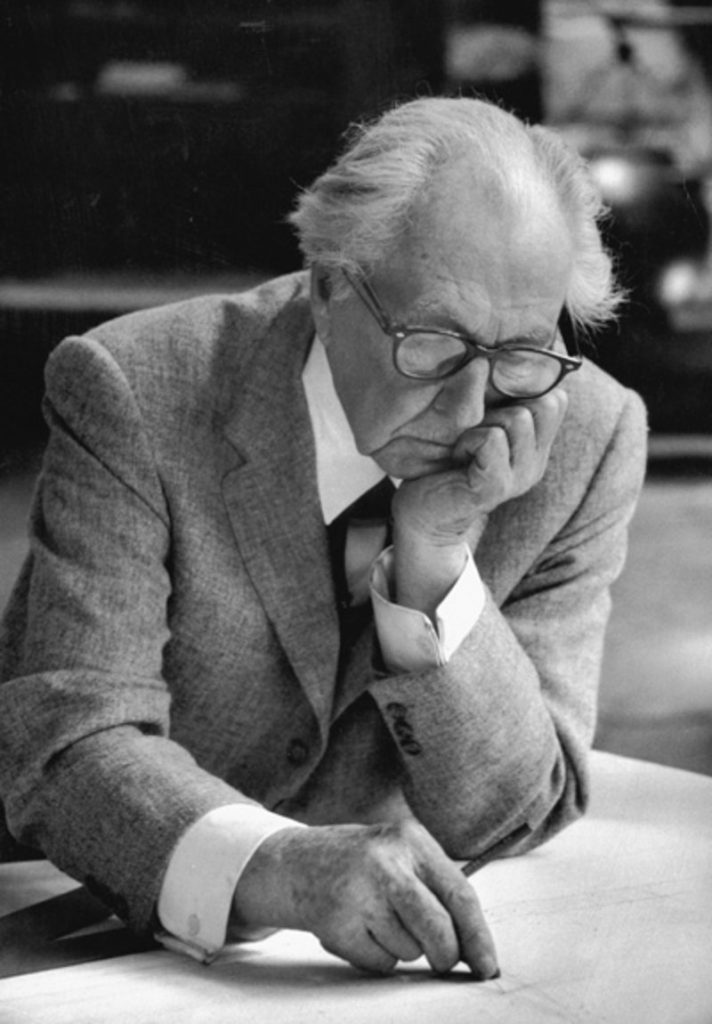 WRIGHT IDEAS IN A NUTSHELL

Like Galileo, Newton, Darwin and Einstein, who discovered laws of nature, Frank Lloyd Wright formulated principles which have affected design throughout the ages, from the Nuraghe of Sardinia (1900-730 BCE,) to the Katsura Imperial Villa (1624,) to Fallingwater (1939.) Although he was as prolific a writer as he was an architect, the reading and studying his ideas has remained confined to few scholars. His language is not easily accessible, his books are rarely put in the schools of architecture’s “must read” list. How can one overcome these obstacles while young people’s span of attention is getting shorter and shorter?

What are Wright’s essential ideas?

Nature is the architect’s principal school. The creative possibilities of form, color, pattern, texture, proportion, rhythm and growth are all well expressed in nature.

The building grows out of the landscape as naturally as any plant. Its relationship to the site is so unique that it would be out of place elsewhere.

Materials are to be used based on their intrinsic nature: strength, color, texture. One material is not to be disguised as another.

A building should convey a sense of shelter, refuge, or protection against the elements. Its inhabitants should never lack privacy or feel exposed and unprotected.

Space: “The reality of the building does not consist of the roof and the walls but the space within to be lived in”, said Wright, quoting Lao Tzu. The interior space determines the exterior form. Interior space is not packed in boxes called rooms; rather, space should flow freely from interior area to interior area. An area is never fully comprehended when viewed from a single point, but it must be slowly experienced as one moves through space.

The human body should be the only scale of a building and its furnishings.

Each building has its own grammar, its distinct vocabulary of pattern and form. All parts of the building, from the smallest detail to the overall form, speak the same language. The grammar may be completely different for two buildings of similar functions.

Ornament, when used, it is to be developed as an integral part of the material, not applied.

Simplicity in art is a synthetic positive quality in which we may see evidence of mind, breadth of scheme, wealth of detail and with the sense of completeness found in a tree or a flower.”

Furniture should be built-in as much as possible.

Sculpture and painting are to become elements of the total design.

What became labeled as “Modern Architecture” or “Modernism,” originated in Europe of the 1920s. Walter Gropius’ Bauhaus,  Le Corbusier and Mies van der Rohe’s ideas, based on constructive social programs, provided with a machine –like  with no decoration and easy to learn slogans, such as “less is more,” ribbon glass windows, all-white rectangle walls, and building on piloti. They influenced the design of thousands of architects around the world, some with positive results, many with catastrophic effects of massive housing and urban sprawl lacking identity.

Wright’s work, although classified by historians under the umbrella name of “Modernism,” refused to be categorized in any one architectural movement. His master-teacher, Louis Sullivan, who pioneered the use of steel for office building, had coined the concept of “form follows function”, later on modified be Wright as “form and function are one.” Simplicity for Wright was an end-result of chiseling out the unnecessary, not a point of departure.

For most young architects eager to start building their own projects, it was impossible to learn Wright’s principles and ethic code without studying in depth his writings, analyzing his drawings and visiting his buildings. Most chose the shortcut.

In the 1960s the term “modern” was substituted by the more inclusive term “contemporary.” It included hundreds of art and architecture languages and grammars. Some were authentic, some were progressive, like “High-Tech,“ some were regressive, like “Post-Modernism,” many were trendy, and some “stararchitects” indulged in building acrobatics having little to do with people’s needs. “Contemporary” implied a freedom of expression that many interpreted as “anything goes.”

The Italian Website ADAO (Friends of Organic Archirecture) (http://www.architetturaorganica.org/architetturaorganica/HOME.htm ) shows links to many organic architects, such as John Lautner, Carlo Scarpa, Bruce Goff, Bart Prince, Kendrick Bangs Kellog, Robert Harvey Oshatz, to name a few, their numbers remain a small fraction in comparison to all what is being built.

At a philosophical level, the quests of Dario Salas Sommer’s Moral Physics, Yuval Noah Harari’s New Human Agenda, and Frank Lloyd Wright’s Organic Architecture, interact as “a cosmic vision beyond ever-changing creeds or viewpoints that have until now divided human beings according to their geography, their culture or their ideas.” God / Nature / Truth / Unity / Existence  / Being / Whole become interchangeable words implying the working and interacting together as a whole. The time is now. As the world’s population grows to a likely ten billion by mid-century, twelve billion by 2100 and possibly 30 billion by 2200, planetary management that crosses borderlines and governments become indispensable.

In addition to all said, mixed-use and multi-functionality are integral components of a sustainability agenda. While mixed-use juxtapose multiple functions (housing, commerce, education, )  multi-functionality makes possible the multiple uses of the same space, and the multiple-use of a same component: a stairway as structure, a column or beam as a container of ducts, a wall as container of storage, a roof as an edible garden.

Mobility is integral to both human needs and to sustainability, yet it demands a total revision of how it works. It consists of three categories. A. Emergency access (firemen, ambulances, police, rescue from disasters.) b. Public use: air mobility and public transportation of multiple kinds: trains, tramways, air tram cable cars, moving conveyors, buses, taxis (with drivers or driverless,)  hot air balloons. c. Private: bikes, skateboards, cars, trucks (owned or rented.)

Organic architecture needs to awaken from its long sleep. It requires reinterpretation without falling into nostalgia or an imitative expression of Nature. Although nature remains the most important source of inspiration, it is to be interpreted, not copied.