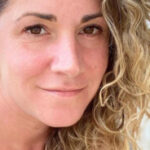 When I was 16 my parents took
me to an Orioles game. During
a rain delay, I smoked in secret
beneath the concrete canopy

a reminder of how small we are
in a world so big or how nature
will do what it wants with us and
how, from a distance, that’s actually

It was nice to see you on Thanksgiving.
I wore ripped jeans and an abandoned
shirt on account of having been drugged,
raped and abducted the night before.

I put a hand on your wife’s shoulder before
I touched yours as if we were all friends
as if you don’t prompt half a dozen poems
when you touch the waistband of my pants.

He forced his bent dick into the window he’d
created in my panties. He insisted, you love me
as if not loving him would secure my death.
Afterwards, I lay catatonic on a concrete slab.

You looked great. My mom was surprised that
your hair is short. Shows how long it’s been.
When we got back to our table she said your
children are beautiful. They are.

The cops wanted to arrest me. Did I tell you that part?
When I fled the fake Lyft south of Manchester
they found me stumbling along the interstate
slipping into ditches, being sliced by brambles.

When I see you, I feel so painfully alive. It feels like
New Year’s Eve, my body a bottle of champagne
and everything else dark and jarringly crisp.
I want to let you in. I think things would be better that way.

They would have arrested me if I hadn’t said
I WAS JUST RAPED which, let me tell you,
opens a whole new can of worms. They don’t want
to let you go after you’ve said a thing like that.

I don’t want Richmond anymore. The only good
thing that happens there is the thing that can’t.
When I said I’d visit you asked why. The answer is
I have to. Part of me doesn’t live without it.

The cops will tell you that time is of the essence
as if you’ve never seen Law & Order SVU, as if it’s
the only training they’ve had. You’ll have to focus
on the boy cop’s blue eyes and say Lawyer.

2
Tags:
Previous Article
Ode to the Variants
Next Article
How to Come Back with a Vengeance