A Magnificent Jasper Johns Retrospective at The Broad Without qualification, Jasper Johns could be described as “the old master of twentieth century American painting.”  He has been a recognized major artist since his first one-man show at The Jewish Museum in New York in 1964.  The New York art world in the 1960s was a fantastic cauldron of creativity: Cage, Cunningham, Johns, Lichtenstein, Marisol, Rainer, Rauschenberg (John’s partner over a seven-year period), Schneemann, Warhol. and a multitude of others. Grace Glueck, New York Times art critic at the time said, “It was as though a new art movement was being invented everyday.” The war in Viet Nam was raging in high gear.There were endless demonstrations and marches. ”Flower power” was seen as an antidote. A new world was being invented by a younger generation. Johns was more a silent partner than an active participant; however, it is difficult to assess his work and his position in the American art hierarchy without reference to the dynamism of New York in the 1960s, where he worked, lived, and formulated his ideas  in those early years years of his career.

The Broad exhibition of Jasper Johns work is a landmark event consisting of more then 100 works spanning sixty years of this career. Organized and presented in collaboration with the Royal Academy London, it had been presented there prior to its being seen in Los Angeles. Although a career embracing exhibition, it does not follow the chronological progression of a typical artist’s retrospective. The organizers of this exhibition have seen it differently by using the many themes of his paintings as a presentation principle. It works remarkably well! Throughout his entire career, Johns has returned to the same symbols and motifs such as flags and targets often utilizing different media. His objective is to stimulate the mind and eye in new ways and to provoke viewers to study and break fixed habits of perception. Such ideas were very much in the minds of scientists and philosophers in the 1960s. They no longer saw cognition as a linear phenomenon, but as a barrage of correlated facts and images which were experienced differently by different viewers. Perhaps prescient in the 1960s, such concepts are now widely accepted and practiced in many fields of endeavor. However, this in no way categorizes John’s work; it demonstrates the continuing validity of his perceptions and modes of visual exposition.

Johns recalled, “One night I dreamed that I painted a large America flag …and the next morning I got up went out and bought the materials to begin it.” Over the years, this theme has been repeated and modified. Cumulatively, Johns flags suggest a perceptual game of alternating between reality and illusion. Three Flags, 1959, in the collection of the Whitney Museum of American Art, demonstrates this multiplicity.  Each flag is seen on a separate canvas, one placed on top of the other, challenging traditional perspective where the object farthest from viewer is reduced in size. In his work, Johns is an amalgam of traditionalist and non-traditionalist. Traditionalist when he paints in encaustic (hot wax mixed with colored pigments developed in Sixth Century BC Greece), and non-traditionalist when he consciously violates the conventions of perspective (developed in 15th century Florence).

One of his most iconic images is a series of Savarin coffee cans containing his paints and brushes. In the 1960s, he began to incorporate objects and tools involved in the creation of a work into the actual work itself. Here was evidence of the tools used in the creation of one of his works of art.

Foirades/fixies, 1976. Artist’s book with 33 images by Jasper Johns and five texts by Samuel Beckett in French and English. Collection of the artist.

From the 1960s, Johns was interested in language and its relationship to visual perception and began to incorporate words and letters into his paintings,  doubling as their titles. He considered the building blocks of language -the alphabet and words – to be symbols with ambiguous meanings. In some cases, he would incorporate  text into his canvases.

Beyond painting, he was a student of philosophy and literature. In philosophy, it was Ludwig Wiittgenstein (early 20th century Austrian philosopher). His interest in literature lead to a collaboration with Samuel Becket, the avant garde Irish novelist, playwright, poet and theater director  whom he met in 1976.

Cross hatching became a visual language which he used in different configurations: repetition, mirroring, shifting and scrolling. It came to him while driving on Long Island in New York. He said that he saw it on a passing car. “I only saw it for a second … but knew that I was going to use it.” 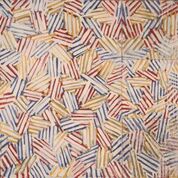 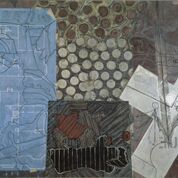 “The works in the final three galleries (of which this is one) – completed between 1989 ad 2016 – continue Jasper Johns’s explorations of memory, identity and mortality, while expanding his ongoing inquiry into the relationship between perception and meaning.” [FROM A WALL LABEL IN THE GALLERY]

Unquestionably, these paintings while possessing many characteristics and similarities to his earlier work, represent a totally different visual vocabulary.

While he is searching for another iconography, these paintings look and feel dissimilar to his earlier work which was cohesive in thematic representation and repetition. They represent another chapter in the career of a towering genius.

In summation, this is an exhibition that will not only be gratifying on viewing, but will resonate eloquently on reflection.