We re-emerge from the rubble of quarantine into fresh air—a little tentative and rattled. The breeze feels good against our unmasked faces. Landscapes have been leveled and reshuffled. There is lots more empty space, between people, on streets, in buildings, in communities. We are beamed photos from Mars and they feel eerily familiar. What is the way forward in this new omnidirectional frontier?

Take notice—this moment is fleeting, and in it we can see with brief and stark clarity that open space is vital and priceless. The civic value of social space has shifted from “amenity” to “urgency.” The pandemic has laid bare our social stratifications like a fossil. Public social space is the democratizer—an enzyme in the civic terrain. Piazzas, parks, stadiums, streets, parkways, markets… these are the spaces where we can regain our collective expression and inspiration—the same spaces that birth democracies and renaissance. Public space mitigates class. Art creates value. It is regenerative, a social catalyst, the panacea to our “pandemania.” Sharing air, sharing silence, moving and breathing together… physicality on a social scale… this  domain of our lives has been decimated by our year of isolation. Art is the instrument to regenerate it.

A pandemic is by definition borderless. It is a migration—an ecosystem of life on earth, as real as evolution—the migration of animals, of peoples, of geologies, of viruses, of atmosphere. We have all migrated here. 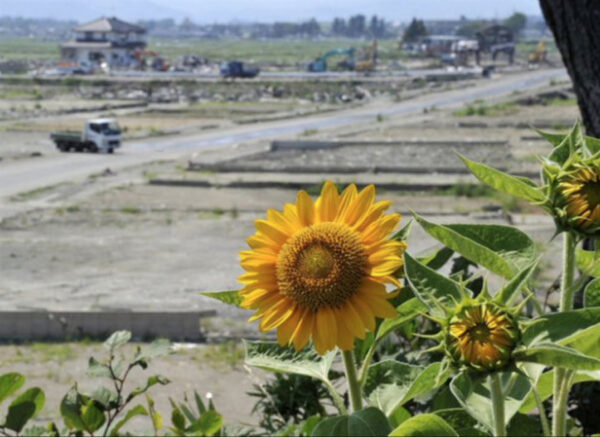 Fresh air is our ultimate negative space… shared air. It will be exhilarating to robustly breathe together again. A greater context will become blazingly clear—we live under one sky, immersed in one atmosphere. We share air. With this, the post pandemic landscape begins to feel navigable as we locate where sky touches ground. And on that horizon is the Green New Deal.

The Green New Deal is modeled on the FDR original, the doctrine that lifted us from The Great Depression and established a fiscal and moral foundation for 20th century America. The Works Progress Administration (WPA) is a milestone in American cultural history. It pioneered and instituted art in the public realm, from subway mosaics to modern dance. Collectively and historically, FDR’s New Deal is revered for its centurion civic uplift.

The Green New Deal follows that model. It is a national mandate “…to secure for all people of the United States for generations to come—clean air and water; climate and community resiliency; healthy food; access to nature; a sustainable environment; and to promote justice and equity….” It is not yet a legal doctrine, and we cannot wait for bureaucracies. The scale of culture is bigger, faster, and more nimble than the scale of politics. The Green New Deal is a cultural mandate. The regeneration of life on earth is THE critical value of the 21st century.

Ironically, our Founding Fathers derived the US Constitution directly from the Iroquois Confederacy, with two notable omissions—the Iroquois’ matriarchal model that placed female elders as the ultimate tribal authority, and the precept to measure every environmental impact to the scale of seven generations. 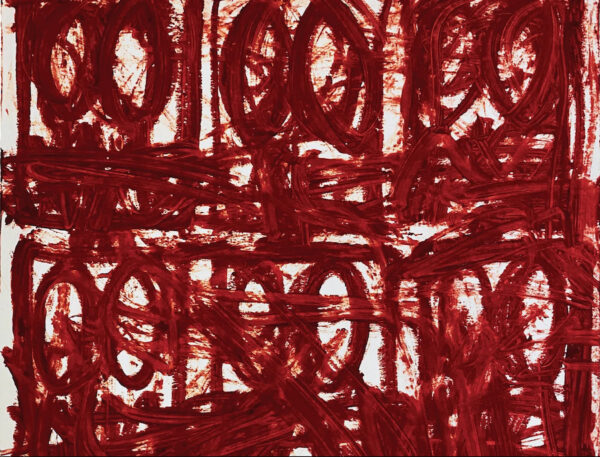 I am excited to see the art produced during the pandemic. Like many artists, I found it to be a time of enforced privacy and creative sanctuary amidst the oppression of pandemania and the anarchy of uprising. It will be exciting when the work is released and foments new buzz. Galleries at their best are open sanctuaries of pure idea. However, the art model of private acquisition and encyclopedic archiving will not meet the scale and urgency of this moment. It ignores the opportunities, and borders on irrelevance.

Art in the context of private space is not collectively regenerative. Art that is created from and lives in the context of shared air can generate the deepest and most lasting value and impact. We need to reclaim, redefine, re-engineer and re-value the space between us. Art can be the catalyst. Art arises in the experience between the artwork and the viewer, and enriches that space with meaning, beauty and mystery.

It has been said that 2,000 years from now the American civilization will be known for three contributions—the Constitution, jazz and baseball.  Jazz got things shakin’. That’s what art does. 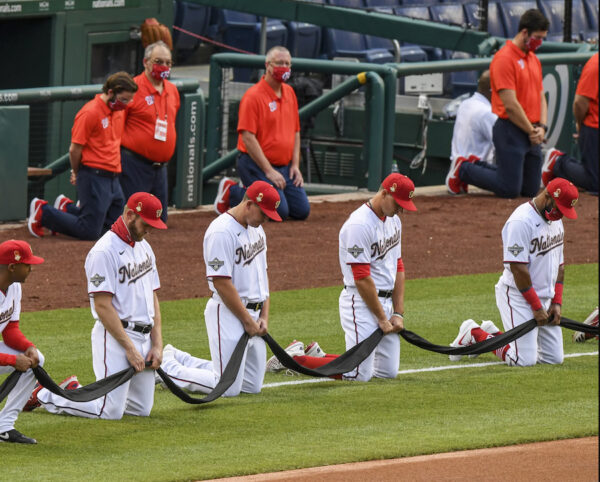 The pandemic closed major league baseball to the public. In Washington DC, the home of the reigning 2019 World Champions was in danger of becoming a quarantined behemoth on the DC waterfront. The Washington Nationals executed a beautiful civic flip, and the stadium became a community center, hosting Chef Andre’s community food kitchen, free flu shots, voting booths, and vaccines. Now the area is under a major public redevelopment. The construction of the new Frederick Douglas Bridge will carve acres of new public space and greenswards. Home to two major league stadiums (baseball and soccer), what new possibility for the waterfront community can be gained by these now redefined civic icons? The Coliseum in Rome after all was more than a sports arena—it was a cultural center, a theatre of spectacle and public square. Who can forget the George Floyd/BLM tributes staged by our athletes at the openings of the 2020 NBA, NFL, and MLB seasons?

New York City had already planted a million trees and started seeding a billion oysters in the wake of Hurricane Sandy, and the massive BIG-U coastal infrastructure project was launched and underway. When Covid overran the city and theatres went dark, the Broadway spirit reawakened on the East River, democratized as a drive-in. Fifty thousand square feet of Astoria waterfront at Halletts Point became Radial Park—a hybrid drive-in movie theatre and performance stage realized by the magic of container architecture. Broadway films and live performers made for a new style of a night on Broadway. Thousands of New Yorkers could safely share air and art thanks to this re-visioned, regenerated, re-contextualized open space.

Across the U.S., art and food have joined forces to take on the blight of urban food deserts, while in Japan the Echigo Triennial weaves the same combination to preserve and regenerate their fast disappearing and historic rural culture. At Fukushima, fields of sunflowers as far as the eye can see are remediating the contaminated soil, while subterranean ice barriers encircle the smoldering radioactive ruins at the core. In Oakland, cob houses and community ovens are creating beautiful homes for the homeless; in London, this year’s Turner Prize goes to an Agit Prop art collective; and the San Francisco Opera sets up residence in a civic center parking lot. YES to outdoor opera houses over parking lots! 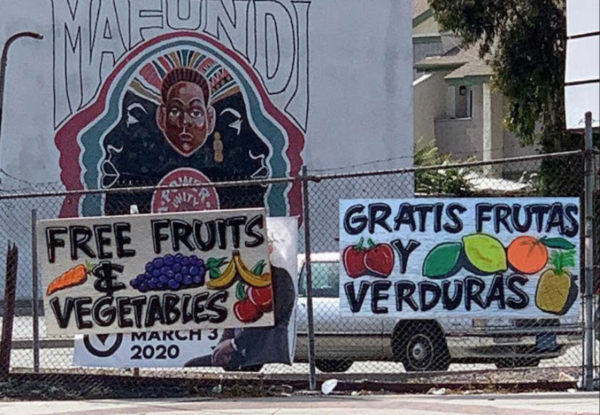 Culture is regenerative. Art delivers supreme creativity with maximum velocity to the most precise target, generating the greatest possible impact. New value arises from negative space—the space between us. This is the territory of the Green New Deal.

Amongst the new fields of rubble in my town is the site of the former Los Angeles County Museum of Art, its final façade spectacularly leveled during lockdown, silencing the blood boiling pre-Covid controversy around its radical replacement. Visionary Pritzker architect Peter Zumthor has designed a new, “floating” horizontal museum. Seemingly chiseled from an approaching fog, it is a suspended, amoeba-like, one story glass and concrete slice of aerial geology, transcending the urban grid as it literally hovers and traverses Wilshire Boulevard. It was despised and vilified  by many on historical and financial grounds, specifically attacked for its lesser office and gallery space. That conversation is now moot. 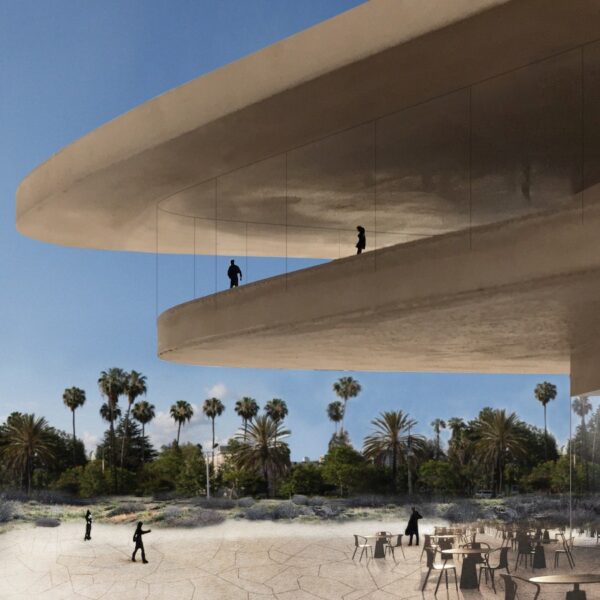 Zumthor’s vision has proven to be prophetic. Elevating and stretching the building redraws the civic grid. By doing so, it maximizes outdoor space and redefines the contextual landscape. A single, greater park is created. The buildings become sited within a whole landscape, standing within a single and omnipresent atmosphere. Hancock Park becomes an arts and science park spanning multiple city blocks, from Fairfax to Curson, Sixth Street  to Wilshire and across to embrace the soon to be historic Perreira tower and plazas. The new LACMA erases edges, becoming not just content but context. It reaches out and across. From within it we can see the horizon.

Exhibition space is actually significantly increased, as the new LACMA creates the possibility of a vibrant outdoor sculpture park in the middle of our city. It democratizes art. This radical new architecture can embed in the civic infrastructure a free public space of art for art’s sake, in a social context. Intuition, gesture, poetry and visual anarchy can live as constructive creative forces at a state-of-the-art civic scale. It is an “open” museum, perhaps not built so much to archive the past but to invite the future—a platform to receive new creative inquiries and new cultural possibilities of sustainability, ecology, diversity, trans-history, interdependency, humanity… in the heart of the city with a civic immediacy. It can secure public sanctuary, generate creativity, build social resiliency, provide access to nature and strengthen community. It could quite possibly become the first global cosmopolitan museum in the age of the Green New Deal. 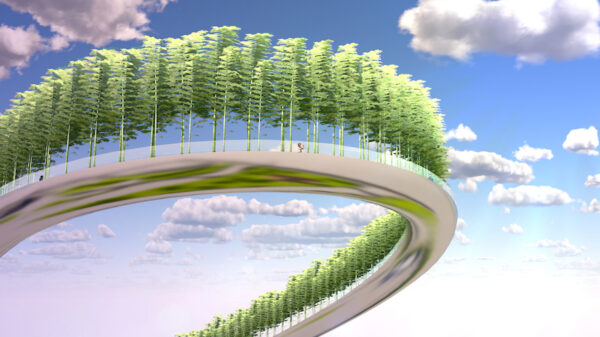 Human creativity is a natural force to be tapped, like wind turbines tap the wind. Zumthor’s art and intuition created a solution to a critical problem that we did not know would exist. Great works of art begin with the creation of great problems. We face a future of monumental problems—forest management, carbon reduction, water generation, socio-economic justice, global planetary health and so much more.

So much great art to be created.

Stephen Glassman and Stephen Glassman Studio create large scale site-specific artworks around the world. His practice is an inquiry of gesture, scale, and social impact.
stephenglassmanstudio